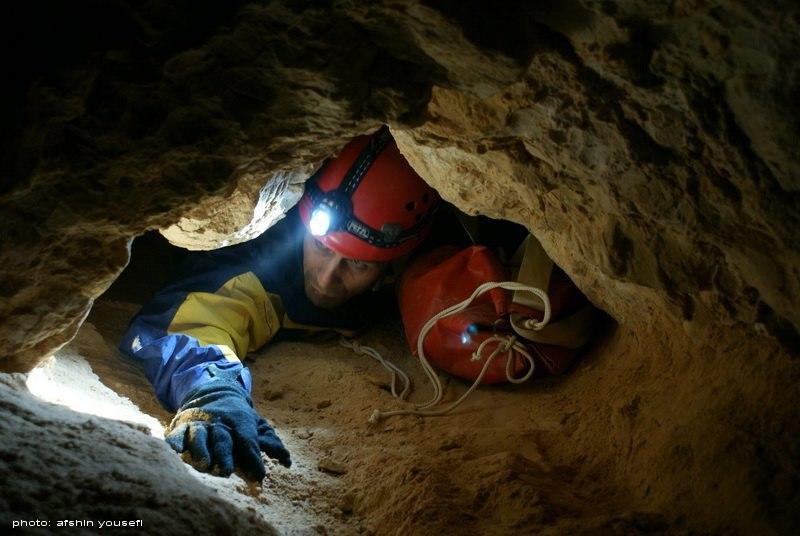 A top caver describes Iran as one of the few places in the world with dreadful and beautiful caves, shedding more light on the main features of these mysterious attractions.

Hossein Faraji is one of ten best cavers in Iran. He is a member of the Iranian Caver Association, a member of the Lebanese Caving Club, and a mountaineering instructor.
In an interview with Khorasan daily, Faraji has talked about the exciting features of Iran’s caves.

Faraji started exploring caves at the age of 21, and after a while, he sought refuge in caves in search of the unknown and further adventure. He has been exploring the caves for 25 years.

“The mountains are visible to humans, but there are caves that have not yet been discovered and no one knows about them. Caves have been our main homes. In fact, the first place that early humans called home was these cavities, which are strangely warm in the winter and cool in the summer, and have a natural ventilation system. Our intelligent ancestors could not have chosen a better place to live than a cave. In some excavations, we find artifacts such as paintings or tools of human beings that show our ancestors lived in this place thousands of years ago,” he said.

Most Exciting Caves in Iran, World

Caves are generally divided into several categories based on their specific characteristics, says this mountaineering and cave-exploring instructor.

“Vertical caves need ropes to climb. Horizontal caves that do not require ropes and the third category are vertical and horizontal combinations. There are also caves that early humans built to live which are called hand-made caves. The other category is salt caves, which are composed of salt, and exploring them has its own special enthusiasts. It is interesting to know that Iran’s Qeshm Salt Cave is the second largest in the world in terms of size and length which dates back to the pre-Cambrian period i.e. 570 million years ago.”

Faraji also talked about different and interesting caves and introduces Por Ou and Kataleh Khor caves among them.

“One of the most exciting of these caves is Por Ou,” he said, referring to Iran’s unique caves. This cave is located on Mount Por Ou with a height of 3050 metres in Kermanshah province. It is undoubtedly one of the most important and exciting caves in Iran.

“To reach the mouth of this cave, you have to climb a mountain of 3050 metres. This cave has 24 wells and has been the deepest cave in Iran for the last five or six years, but the reason for the popularity of this cave is not only the height of the mountain and the number of its wells. This cave is called the killer, so much so that many of its enthusiasts are afraid to climb. The reason for that horror is the unfortunate events that took place in this place. To date, five cavers have died there, one of them was a professional Himalayan climber, and the bodies of two cavers have never been found. All of these deaths have made even professional cavers hesitant to go there,” added Faraji.

The next cave is Kataleh Khor. This cave is the longest one in West Asia and is located in Khodabandeh, Zanjan province.

“In this cave you will see stalagmites and stalactites that are very large. The remarkable thing about this place is the number of floors and halls. Its most beautiful hall is the bride and groom’s hall which is named after its structure. This cave was discovered in 1952. To enter it, people had to crawl about 700 metres and as soon as they entered the first hall, they realised early humans lived in this place many years ago. So far, about 80 skeletons of primitive humans have been found in Katleh Khor,” added Faraji.