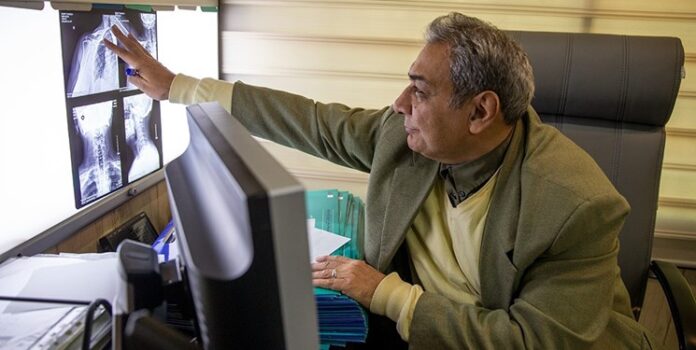 Hamdreza Edraki is an Iranian radiologist and war veteran who is doing his best to serve the people not only in Iran but also in other countries amid the coronavirus contagion.

Even though it is difficult for him to walk, Dr Hamidreza Edraki has not limited his services to the borders of the country. In his workplace, he looks at radiology images of COVID-19 patients from deprived areas of Iran to European countries without asking for money and he receives kind messages from European physicians.

Last year, he was selected as the nation’s premier radiologist, but he may also be chosen as one of the volunteer doctors in the current year due to his sense of responsibility and expertise shown in the analysis of corona patients’ lung radiology.

He analyzes radiology photographs of patients across Europe without any expectation because he wants to fight the global deadly virus.

According to Fars News Agency, he is currently a faculty member of Shahid Beheshti University of Medical Sciences in Tehran. When he arrived in Germany in 1996 and received his degree in CT scans and MRIs, his expertise was still very limited in the world. He has gone all this way without his legs. When we say he has no legs, it’s because Dr Edraki left his legs near Arvandrood at the time of Iran-Iraq war when he was 18. But as we see, this 57-year-old man is still full of motivation to serve the people. However, till the end of the interview, we were unaware of his disability. He tried not to say this until the story of the radiology images made us realise the story of this war veteran.

For the past few months, with no reports of coronavirus infections in Iran, he spontaneously studied X-ray and CT scans of corona patients in China. All the lung images were examined since the outbreak of the disease to the deterioration of the patient, and every moment, seeing the photographs and reading the analyses, he wished the virus be contained in China and never cross the borders. But that didn’t happen, and now Dr Edraki had to do the job and continue the path he had taken. Now, through its worldwide network of Pacs systems, he strives to help other physicians around the world and in remote areas of the country.

Dr Edraki runs a large charity radiology centre. He is very active. We meet him at his office. Talking to us, he analyses a radiology image. Without being disrupted, he explains about the Pacs system.

He keeps silent for a few seconds as he puts images of a patient on a light screen. He writes his comment on a piece of paper and continues.

“These days are just like the battlefield days. Throughout my studies, I have found that the virus attacks the lungs in very specific conditions. What can be said to people is that the lungs of the coronavirus patients have lesions similar to the sand or tiny crystalline granules that grow from the bottom of the lungs until they reach the upper part. These spots quickly whiten the lungs and cause a small amount of water to accumulate in the lungs. The lung involvement with the coronavirus is similar to other lung diseases, but the way the lesions are placed in lungs is quite different from other diseases such as pneumonia, tuberculosis, etc.”

“It’s been two weeks since European doctors from Germany, England, France, Italy, etc. have been asking us how do lung lesions of the coronavirus look like? What are the differences with other lung problems? What are the first symptoms in a corona patient’s lung? How are the patients in critical conditions? And thousands of other questions that I’ll answer using sample images. Most of the time they send me pictures of their patients for diagnosis and analysis. I analyse almost over 25 images of European patients every day and send them my opinion. European doctors are very grateful and happy that they have not entered the test phase using Iranian doctors’ opinions.”

Q: As you have seen the lung images of Chinese, Iranian and European patients, is it true to say that the status of Iranian patients differs from other patients in other countries?

A: That’s not the case. All cases are the same. If there is a difference it is in an individual. It is because of each patient’s immune system. What I have seen in radiology images is that the behaviour of the virus in the lungs is almost the same. These statements have no scientific basis and are all rumours. It is better not to pay attention to them.

Q: Which countries receive the most help from Iranian radiologists?

A: “Mostly the German doctors send me images of their patients’ lungs because Germany is so advanced in medical sciences and the Pacs system is active in their country. Although Italy is more involved with the virus, it is less connected to the global Pacs network.

Q: You’ve seen a lot of radiology, CT scan and MRI Images all these years. What is the most fascinating radiology photo you’ve ever seen?

A: My own radiology image.

A: I was 18 years old and volunteered for war in my hometown of Boroujerd, Lorestan. My parents were very attached to me. But I couldn’t go to the warfront. I had to prove that I am a grown-up man. In 1984, Khorramshahr had just been liberated, but Iraqi forces and our soldiers on both sides of the Arvandrood were constantly exchanging fire. In one of these attacks an enemy mortar hit my legs. I heard from my friends that the mortar shell had severely damaged both my legs so that the initial actions were taken at the Khorramshahr Field Hospital. There, the doctors at the field hospital cut my legs to keep me alive. When I opened my eyes, I was in the Ahwaz hospital and had no legs. For years I was looking for the doctor who cut my legs, but the more I searched, the less I could find.

Years later, I passed the university entrance test to study at Shahid Beheshti University of Medical Sciences. I even passed the radiology course. It was 1999 and 15 years had passed since my injury. A conference was held at Shahid Beheshti University in the presence of radiologists and orthopaedists. One of the orthopedic surgeons was sharing with other radiologists and orthopedists his 30-year experience. When he put the image on the light screen, I looked down at the image. It was written in Persian Hamidreza Edraki. I could not stand on my prosthetic feet. Seeing him in the hall, I went and asked, “Whose image was the one you showed?”. He said a youth in Khorramshahr Field Hospital. I said I am that young man! He did not move and was gazing at me. When he found out I am a radiologist, he was no longer able to stand on his feet. Dr Emami was so happy. We’ve been visiting each other ever since. He later shared another secret with me. He said “When I was performing the surgery, because of a lot of blood loss your heart stopped. We all lost hope. You were almost dead but suddenly you returned to this world.”

“If today I strive for the health of my patients wholeheartedly, it is just to be grateful to God who bestowed me another life,” said Dr Edraki.