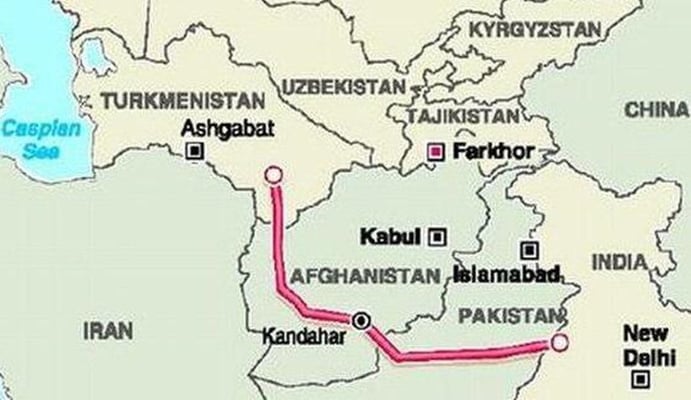 While Iranian officials maintain that it is unlikely the Turkmenistan–Afghanistan–Pakistan–India (TAPI) pipeline project becomes operational, Saudi Arabia has pledged to provide its investment and Taliban militants vowed to secure it.

Taliban Spokesman Zabiullah Mujahid said the militants are ready to guarantee the security of TAPI Pipeline.

Attending a ceremony to launch the project, he added Taliban is ready to secure the pipeline because it is a good project for Afghanistan’s economy, a report by the Persian-language Fars News Agency said.

This comes as Hamid Reza Araqi, the CEO of Iran’s National Gas Company, says he is not optimistic about the future of the project.

He said Tehran has expressed its preparedness to help Turkmenistan export its gas to Pakistan through Iran, but Ashgabat has yet to provide a response.

He noted that given Iran’s geographical location, the country can take part in any pipeline project in the region.

“Even if the project is accomplished within the next ten years, it’s not clear yet how its finance and security are set to be provided,” he noted.

The TAPI project was launched earlier this year in a ceremony attended by officials from Afghanistan, Turkmenistan and India. It is expected to connect Dowlatabad Gas field in Turkmenistan to Herat and Kandahar in Afghanistan, Quetta in Pakistan and Multan in India.

It seems the project has been launched as a rival to the controversial Peace Pipeline also known as Iran-Pakistan (IP). It is expected to transfer 90 M3 gas.

Now as the Iranian officials are pessimistic about the future of TAPI project, Saudi Arabia as well as its regional allies have expressed their readiness to take part in the project provided that Iran is left out. This will cut Iran’s access to East Asian markets.

Over the past years, Iran has not taken seriously East Asian countries as an export target. This has turned the countries into a good target for other gas exporters.

Experts say if Iran takes advantage of its bargaining power, it can export its gas to the East Asian market at a reasonable price.

In an address to the launching ceremony of TAPI project, Afghanistan President Ashraf Ghani expressed hope that the future generations of Afghanistan would take full advantage of the project to promote their economy and security.

Pakistan and Afghanistan which used to be among the main importers of Iran’s gas are now putting much efforts into TAPI project.

Experts say the ground is now prepared for the countries to import gas in less than four years.

Despite earlier agreement between Iran and Pakistan to establish the Peace Pipeline, the latter announced it does not have money to invest in the project. So, the Iranian side allocated a $500m loan to Pakistan to complete its side of the pipeline. With the taking office of the new government in Iran, the new Oil Minister Zanganeh refused to give the loan to Pakistan. This partly prompted Pakistan to move towards TAPI project.

Meanwhile, in 2010, the US asked Pakistan to abandon the pipeline project. By cancelling the project, Pakistan would receive assistance from the US for the construction of a liquefied natural gas terminal.

Now experts warn that with the new developments, if Iran remains passive, it will be left out of TAPI project forever.