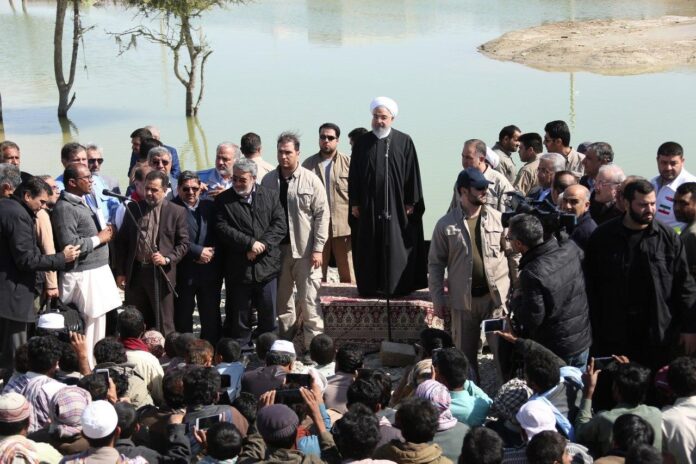 Iranian President Hassan Rouhani has travelled to the southeastern Iranian province of Sistan and Baluchestan to have a first-hand assessment of damages and people’s conditions.

Accompanied by a number of his ministers, President Rouhani visited Dashtiari county near Chabahar in the southeasternmost corner of Iran on Saturday morning.

Speaking to people at the Kalani village, the president gave an assurance that the administration will keep supporting residents of the flood-stricken areas.

Hailing the local people as the “dear border guards” of Iran who live near the friendly nation of Pakistan, President Rouhani pledged that the administration will repair the damages, reconstruct the houses and provide emergency treatment for the injured.

He also noted that precautionary measures following the warnings from the national weather service prevented the loss of lives, stressing that the financial damages will be compensated.

The president also lauded the Army, the Islamic Revolution Guards Corps (IRGC) and the Basij for mobilizing forces for rescue and relief operations.

Heavy flooding in the province of Sistan and Baluchestan has affected 14 cities and 850 villages. Access to at least 200 villages in the large province is still blocked.

It is estimated that around 20,000 dwellings have been damaged or destroyed and some 7,000 farm animals have been killed in the flooding.