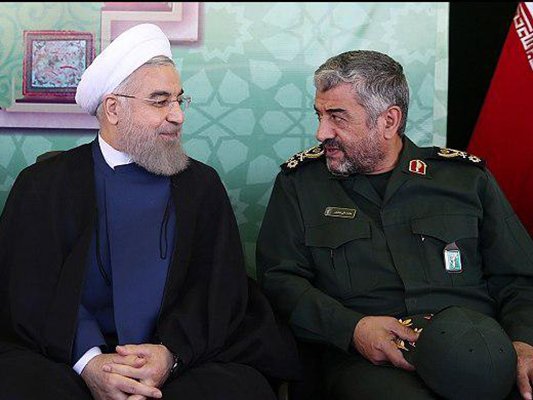 The Iranian president has admired the Islamic Revolution Guards Corps for its role in protecting the country’s security in a chaotic region, in remarks that were seen as an attempt to appease the IRGC following what was widely seen as President Rouhani’s attacks against the body last week.

“Thanks to prowess of the beloved and brave [Guards] Corps, Army and self-sacrificing Basij [voluntary forces affiliated with IRGC], we enjoy exemplary security in Iran,” Rouhani said, according to a transcript of his speech posted on the president’s website.

“We honour our security, which has been achieved through unity and cohesion of the Iranian nation, and will work to [maintain] it,” he said on Tuesday, while addressing a huge gathering in Tabriz in north-western Province of East Azarbaijan11.

This is while Rouhani had made pointed remarks regarding the IRGC last Saturday.

In a speech on the occasion of the Army Day last Saturday, Rouhani hailed the Iranian army for refraining from getting involved in “political games.”

Alluding to the IRGC, Rouhani added, “Today there is not a single corruption case in which commanders of the army are involved … this is [because] of the purity and sincerity of the army.”

These comments were widely described as ‘divisive’, provoking immediate reactions from both the IRGC and the Army Chief-Commander.

In a statement marking the anniversary of its formation in 1979, the IRGC accused certain figures of “intentionally or unintentionally” echoing the enemy’s words to “weaken” the IRGC.

Attending a ceremony to commemorate the anniversary of the IRGC formation, Mousavi said his presence was a sign of unity among Armed Forces.

Rouhani has frequently issued veiled and sometimes unveiled criticisms against the IRGC in recent years.

Throughout his 2017 presidential campaign, Rouhani described it as “a government holding a rifle” due to the role of the IRGC in the country’s economic, political and media affairs.