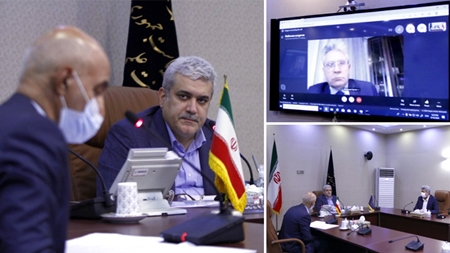 Iranian Vice-President for Science and Technology Sorena Sattari and head of the Russian Academy of Sciences Alexander Sergeev have agreed to expand Tehran-Moscow collaborations in science and technology.

Areas of further sci-tech cooperation, including cutting-edge pharmaceutical technologies, were discussed in an online meeting between the Iranian and Russian officials.

“The two countries enjoy wide-ranging and deep-rooted relations on the diplomatic front, and they need to have similar ties in the areas of science and technology as well,” said the Iranian official.

He noted Tehran-Moscow scientific and technological cooperation has gained momentum in recent years, and that the two sides are also running joint ventures as well.

Sattari then touched upon the potentialities of Iranian knowledge-based companies and research centres in the area of vaccine development and production of medications, adding the two sides can also launch joint projects to produce a vaccine for coronavirus.

The head of the Russian Academy of Sciences, in turn, underscored that the academy stands ready to work closely with Iran in the area of science and technology.

He said the two sides can cooperate in the domains of biotechnology, minerals and the ecology of the Caspian Sea as well as the production of medicines.

He suggested the two countries set up a working group to sort out priorities and define projects accordingly.

Sergeev also invited Sattari to attend a meeting of scientists of five Caspian Sea littoral states in a bid to set the stage for closer scientific cooperation between Iran and Russia.