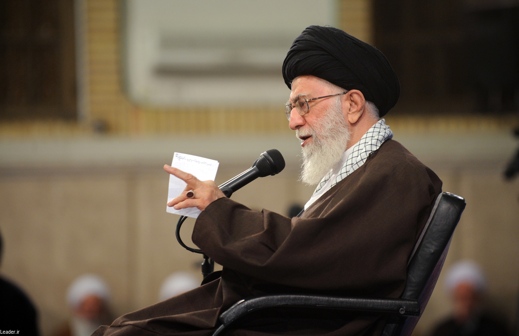 Supreme Leader of Islamic Revolution Ayatollah Seyed Ali Khamenei said on Monday that elections held in the post-Islamic revolution era have all been healthy.

Addressing a group of Friday prayers leaders, Ayatollah Khamenei said that however, there might have be irregularities every now and then organized offenses, which might change the results, do not exist at all.

He said that from domestic point of view, elections give the feeling of independence, identity and influence of the nation and as far as the region and the world are concerned, elections have been a source of reputation and credit for the country and the system.

Elsewhere in his remarks, Ayatollah Khamenei said that as far as infiltration attempts are concerned, they should be disclosed without making any allegations and by offering clear-cut evidences.

He said all those responsible for holding, overseeing, counting, colleeccting and announcing results of votes, should all be watchful to protect the public’s ballots. ‘The least negligence on the issue, will be tantamount to disloyalty to the people’s trust.’

Ayatollah Khamenei then warned against aliens’ provocative efforts, smear propaganda campaigns, extravagance, moral traps and other tactics and said, ‘All should be watchful against infiltration.’

Pointing to Americans’ greedy attempts in connection with upcoming elections, the Supreme Leader said, ‘Americans like changes as we do; however, they want a kind of change that would widen the gap between the country and society; alienating the society from the goals of the revolution and bringing Iran closer to their own goals is their intention.’

To materialize such objectives, Americans have pinned hope on achieving their goals in the elections, said Ayatollah Khamenei, adding that however, the great and vigilant Iranian nation will act otherwise both during elections and in other issues and they will deal a blow to them as before.