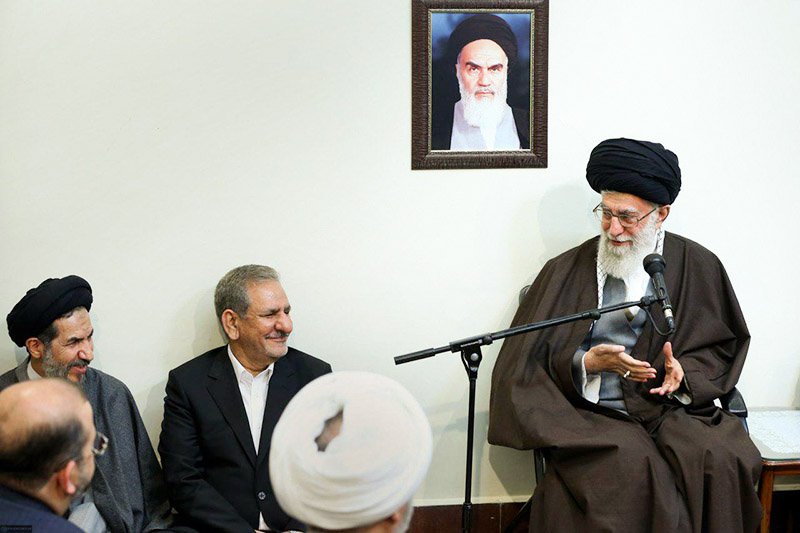 Iran’s first vice-president, who is going to serve as a communication channel between reformists and Iran’s Leader, says Ayatollah Khamenei has no problem with reformists being present in the political arena.

Two months have passed since Ayatollah Akbar Hashemi Rafsanjani passed away. In addition to his unique position in Iran’s Islamic Revolution, Rafsanjani enjoyed a special status among reformists and had so much credit as a top official. The need to fill the void after his demise is one of the key issues facing all political currents in the country, including reformists.

In a Farsi interview with Shargh daily newspaper, Iranian First Vice-President Es’haq Jahangiri speaks of efforts to make up for the loss, including attempts he has made in that regard on behalf of reformists. He had earlier served as provincial governor and minister in reformist administrations. He is a reliable figure with reformists and the Islamic Establishment.

These days, in addition to fulfilling his responsibilities as vice-president, he has undertaken a mission which is of great importance for the future of reforms and the country.

Here are excerpts from Jahangiri’s remarks in the interview.

I had a meeting with Ayatollah Khamenei. Before the meeting, we had held discussions with senior reformist authorities. They all stressed that the meeting should be held. I also consulted the president, who also believed I should call on the Leader. Finally I met the Leader. We discussed the situation of late Ayatollah Rafsanjani, the situation of reformists and their role and status in the Islamic Revolution and the Establishment. We also talked about reformist leaders.

It was a very good meeting and I gave senior reformist figures a full report of the meeting. I believe reformists are a strong and influential current within the Islamic Republic of Iran’s system and they are interested in the Establishment. They have held management positions in the system and among them are disabled war veterans, martyrs’ families and revolutionaries. Reformists also include a whole range of ordinary people with moderate tendencies. Of course, some may have more hardline approaches. Ayatollah Khamenei has very clear viewpoints about reformists and welcomes them. I, for one, will try my utmost to establish a channel of communication between reformists and the Leader.

Ayatollah Khamenei has always stressed that he and reformists should be in contact. The contact has never been interrupted. If the connection has been severed at some point, it was the reformists that stopped keeping in touch. At the moment, they are in contact. Even the Leader said he accepted requests by certain figures to run for presidency. That means Ayatollah Khamenei has no problem with reformists being in the political arena. The Leader wants to be in direct contact with reformists and he asked me to help facilitate the communication.

[In response to a question on whether or not restrictions on reformists were discussed with the Leader, Jahangiri said] I think reformists should abide by certain principles for cooperation within the Establishment. Both the Leader and reformists are sensitive about these principles. Among these principles are the criteria highlighted by the late Imam Khomeini, including the fight against hegemonic powers led by the US. Washington has never engaged with Iran with a smiling face. Fighting aristocracy and poverty was another criterion stressed by Imam Khomeini.

Article 44 of the Iranian Constitution was a serious impediment to economic growth. When I was minister of mines and industries, during my visits to foreign countries and talks with investors on direct investment in Iran, they would say Iran’s economy was a state-run one and it would not be possible to invest in it. “If we invest in an industry, for example, and later on Iran decides that the industry is too big and, under the Constitution, should be handed over to the government, then what we would have to do?”, the investors argued. They said they could not make investment in Iran until the ambiguities were removed.

Leader of the Islamic Revolution Ayatollah Seyyed Ali Khamenei made a great and brave decision. He referred to Article 44, which stipulates that no sector can impede the country’s development by focusing on a given sphere of activity. The Leader said such concentration on the state sector has hampered the country’s progress. Accordingly, Ayatollah Khamenei said activities should be handed over to the private sector. Ayatollah Khamenei’s decision was a major development for the country’s economy and helped removed many ambiguities in the economy sector. The sanctions that Iran was under had created restrictions for the country. The same restrictions were a good opportunity for rente-seekers and opportunists. That increased corruption in the country.

It was at this juncture when such individuals as Babak Zanjani emerged. He has been in jail for more than two years now, and has been handed down a death sentence. Everybody believes the death penalty will not make up for the money he has embezzled. The government has also stressed time and again that Zanjani’s secret affairs should be unmasked. How long should we wait for this to be revealed? We have met with the Judiciary chief in that regard and have sat down with judicial officials as well. I personally believe the Judiciary has acted well so far in the Zanjani case.

First and foremost, the misappropriated money must be returned to the public purse. Second, in order to prevent such incidents from happening again, it must become clear what has been going on behind the scenes. And thirdly, the Judiciary should mete out the right punishment to the offender. Some may like to see the verdict lose its effect as time passes by. But this is impossible. The Leader wants the case clarified. Ayatollah Khamenei instructed me and the Anti-Corruption Committee both in private and official meetings to follow up the case. The Judiciary and the executive branch are also determined to see the case settled.