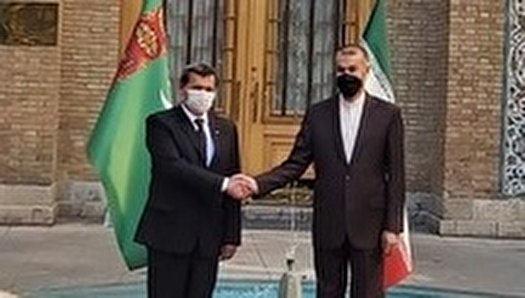 The Islamic Republic of Iran and neighboring Turkmenistan have agreed to increase the volume of their bilateral trade as much as possible.

“Today we agreed to review the joint cooperation document between the two countries. So far, more than 100 official documents have been signed … and our agreement is on a comprehensive document of cooperation and increasing bilateral trade to a maximum level.” Iranian Foreign Minister Hossein Amirabdollahian said after discussions with his Turkmen counterpart Rashid Meredov in Tehran.

The top Iranian diplomat announced that an agreement had been reached with Turkmenistan on reopening the transit route for trucks from four border crossings adding that a basic agreement has been reached on provincial cooperation, and collaboration in the fields of electricity, water and other areas of interest.

During a joint press conference, the top Turkmen diplomat said “we talked about business development and bringing the volume of exchanges to the highest level, and we decided to take trade relations to the highest level in terms of quantity and quality. The Turkmen side is fully prepared for this.”

“I would like to emphasize that the Islamic Republic of Iran and Turkmenistan, as two friendly and brotherly countries, are taking steps and cooperating with each other,” Meredov added.

The Turkmen foreign minister is in Tehran to attend the meeting of Afghanistan’s neighbors plus Russia to be held in Tehran on Wednesday.