Iran President Warns US against Pulling out of JCPOA 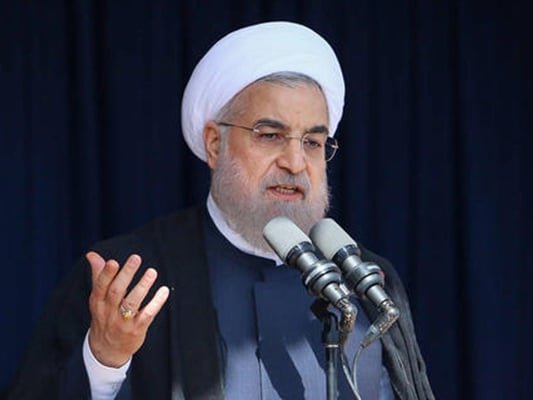 Iranian President Hassan Rouhani has warned the other signatories to the Iran nuclear deal, particularly the US, against withdrawing from the agreement.

Addressing thousands of demonstrators at mass rallies in Tehran, marking the anniversary of Iran’s 1979 Revolution, Rouhani said the Islamic Republic will live up to its commitments under the JCPOA if only the other signatories to the deal deliver on their obligations.

“I’m announcing here, that our nation will remain committed to its obligations as long as the other parties keep their side of the bargain,” said the president.

President Rouhani further said that Washington’s possible withdrawal from the JCPOA will be to its own detriment.

“And I’m stressing again, that if they pull out of the agreement, they will soon suffer the harm from what they’ve done,” the president underlined.

President Rouhani further said the US wanted to interfere in Iran’s internal affairs, but the Iranian nation stood up to them and foiled Washington’s plots by maintaining their unity.

Elsewhere in his remarks, Rouhani touched upon the enemies’ conspiracy to disintegrate Iraq and Syria as well as Iran’s role in thwarting their plot.

“Conspirators wanted to shatter Iraq’s unity, but the Iraqi nation’s vigilance coupled with assistance from the regional countries secured the territorial integrity and national unity of our friendly countries in the region,” he said.

He then touched upon the Americans’ plot against Jerusalem al-Quds, Palestine and the nations in the region.

“They wanted to declare Beit-ul-Moqaddas as the capital of Zionists, but the world stood up to this conspiracy, and not only Muslim countries, but all other countries, except a few ones, opposed this US plot at the UN General Assembly,” he said.

President Rouhani also referred to Iran’s cooperation with other Middle Eastern countries to boost peace and stability in the region.

“We know the solution to the [problems facing the] region is a political one, and we should reinforce regional stability and security in cooperation with other countries,” he noted.

The president also touched upon Iran’s gains in fighting terrorists in the region, and said Tehran contributed to efforts to rid Iraqi and Syrian nations of terrorists.