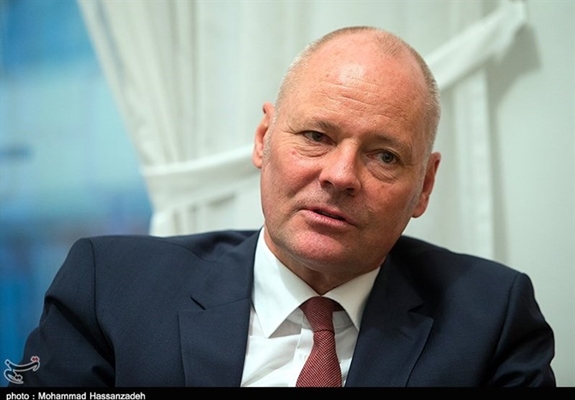 The German ambassador to Tehran has denied the allegation that the European Union has set conditions for implementing its special purpose vehicle for trade with Iran, but at the same time noted that European banks would not work with Tehran if the country fails to adopt the FATF standards.

Speaking in an exclusive interview with Tasnim News Agency published on Wednesday, Michael Klor-Berchtold said there is no direct connection between the anti-money laundering body (FATF) and the Instrument in Support of Trade Exchange (INSTEX), a special purpose vehicle introduced by the EU to facilitate trade with Tehran under the US sanctions.

However, the mechanism would respect international standards on fighting money-laundering, as it is crucial for gaining the trust of private sector firms willing to use INSTEX, he noted.

“Banks working with European firms … are committed to fulfill the standards of the Financial Action Task Force on fighting money-laundering and financing of terrorism. This means the process for INSTEX transaction would be possible only when their Iranian trade partners are verified based on international standards,” he said.

European powers have announced the mechanism will function under international standards against money laundering and financing of terrorism, hence they expect Iran to “swiftly implement all elements of its FATF action plan”.

The German ambassador rejected assertions that the creation of the mechanism was a symbolic move by Europeans to convince Iran to remain in the pact.

He said Europe’s registration of INSTEX testifies to their strong will to salvage the nuclear accord amid increased US efforts to derail Iran’s foreign trade.

“We established INSTEX to facilitate economic relations between Iran and Europe and once again showed our will and efforts to protect JCPOA’s economic benefits,” he said.

“We and our European partners were determined to protect economic benefits of the Vienna nuclear agreement, as we believe that it is good and important that all parties remain faithful to the JCPOA,” he said.

Earlier this month, Europeans announced they are eager to launch a financial mechanism to enable non-dollar trade between Iran and Europe called Instrument in Support of Trade Exchanges.

Responding to the criticism that the EU has been slow to implement the new mechanism, the ambassador said the EU has not been dragging its feet.

“Believe that creating such a mechanism for clearing private transactions was highly complicated and costly. We had to reach agreement inside the E3 and coordinate with other EU members and the union itself,” he said.

“With INSTEX, we walked into a politically unknown land. This great political effort should not be underestimated,” he said.

INSTEX Not Against Any Country

Asked about Europe’s stance toward the US officials who blame Europeans for making attempts to circumvent their anti-Iran sanctions, the ambassador said INSTEX is not against any country.

“INSTEX is not against any country and its aim is not to violate or circumvent US sanctions. INSTEX seeks to prepare the ground for legal deals,” he said.

“It’s necessary that the Iranian side create a similar mechanism … which can register and settle financial claims and payment commitments of Iranian firms,” he said.

The ambassador said the facts on the ground would determine how fast the mechanism could work to facilitate Iran-EU trade.

“… It largely depends on the trust of economic players on the transparency of the whole process, which includes the mechanism of the Iranian side,” he said.

“Trust is created when both structures are working transparently and ensure that only legal transactions are made according to international standards,” he said.

It is up to Iranian and European firms to work with each other and nobody can force them to engage in trade, he said.

“We are certain INSTEX would help firms whose business plans have reached deadlock,” he said.

The ambassador said the mechanism would in the first phase focus on goods that are most needed in Iran and comprise a major part of Europe’s export to Iran.

The ambassador noted that the mechanism in the next phases support other goods traded between the two sides.

“We are holding intense talks with German and European economic officials to develop INSTEX,” he said.