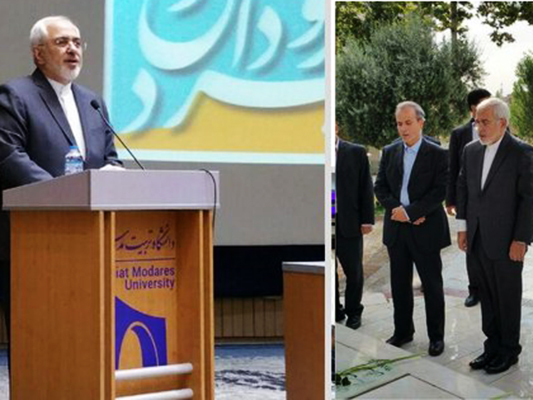 Speaking to a group of students and academics at the Taribiat Modares University in Tehran on Monday, Zarif elaborated on scientific diplomacy as well as the scientific and technological opportunities facing the country. The following are highlights of his remarks:

With the recent developments in the field of science and technology, the range of the audience has expanded in terms of number and complexity. On the other hand, thanks to science and technology, public opinion is no longer controlled by a specific part of the ruling elite. At the moment, the cyberspace is capable of creating different currents in the foreign policy domain, and that is why its vulnerability has increased as well.

One of the ways in which universities can help the foreign policy apparatus is by using the necessary tools to control the domain of science and knowledge. The reason is that the wealth of knowledge available online cannot be used promptly and efficiently. On the other hand, the massive amount of inconsistent information has practically turned into a problem in the way of decision-making by politicians. Moreover, the country needs science and technology when it comes to international relations. The establishment of consistent international relations to absorb foreign students and making use of Iranian universities’ achievements can be among areas of cooperation between the Foreign Ministry and universities in the country.

The lifting of bans on education for Iranian students in certain majors in foreign universities is one of the accomplishments of the nuclear deal signed by Iran and six major world powers known as the Joint Comprehensive Plan of Action (JCPOA).

At the moment, it is possible for Iran to be present in different international scientific arenas. Iran is currently capable of absorbing and exporting science, and the Islamic Republic’s activities in scientific arenas in foreign countries will help the country make its presence felt in the world.

The key duties of the Foreign Ministry in the fields of exports are firstly, the export of non-oil commodities; secondly, the export of technical and engineering services, and thirdly, the export of efficient manpower. Its duties on imports also include absorbing tourists, taking in foreign investment, and importing science and technology.