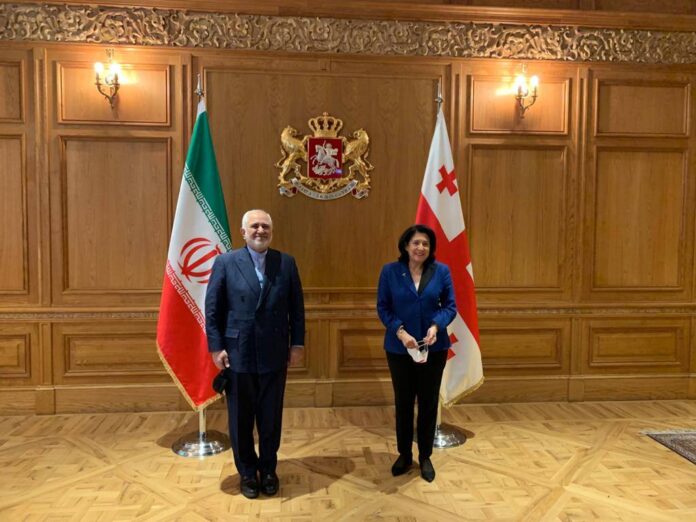 Foreign Minister Zarif arrived in Tbilisi on Thursday morning in the fourth leg of a regional tour after visiting Baku, Moscow and Yerevan.

Speaking to reporters upon arrival in Georgia, the top Iranian diplomat said he has held talks about the bilateral relations and the regional cooperation during his stays in the Republic of Azerbaijan, Russia, and Armenia.

“Our region has undergone very tough conditions. Now we need to get past those difficult conditions and use the new circumstances for cooperation in the region to make sure that war and clashes would not break out again in our region,” Foreign Minister Zarif said.

The minister noted the he is going to meet Georgian authorities for talks about the relations between Tehran and Tbilisi and about regional cooperation.

“We have age-old bilateral ties with Georgia. There are numerous grounds for cooperation with Georgia, particularly in the transit sector,” he added.

“We are well aware of the sensitivities of our friends in Georgia to a number of the regional countries,” the top Iranian diplomat noted, saying Iran is trying to use a “regional framework for cooperation and reduction of tensions”.

“Considering the new international conditions, I hope we could remove the obstacles to mutual cooperation with Georgia and move towards closer cooperation,” he added.

Pointing to the “very positive cooperation” with Georgia in the transportation sector, Foreign Minister Zarif he has held talks with the Azeri and Armenian officials about the South-West Corridor, which leads to Georgia and connects to the Black Sea.

“This corridor is useful for Iran, Georgia, and other countries along the route,” Zarif noted.

The top Iranian diplomat further had a meeting with President of Georgia Salome Zourabichvili.

In the meeting, Foreign Minister Zarif expressed the hope “that under the new international circumstances, the relations between Iran and Georgia could further expand.”

“We have historical ties,” he told the Georgian president, saying Iran and Georgia can enhance their relations in future.

The top Iranian diplomat congratulated Georgia on holding successful parliamentary elections, highlighted the historical relations between the two countries, and conveyed an invitation from the Iranian president for Ms. Zourabichvili to make a state visit to the Islamic Republic of Iran.

On the bilateral issues between Iran and Georgia, Foreign Minister Zarif expressed hope for the promotion of cooperation between the two neighbors in various fields of mutual interest, particularly the trade and economic interaction.

The Foreign Minister also pointed to a series of problems that the Iranian nationals residing in Georgia and the Iranian truck drivers are facing, calling on the government of Georgia to help settle those problems.

As regards the regional issues, Foreign Minister Zarif explicated the Islamic Republic of Iran’s stance on using the opportunity in the wake of the recent clashes in the Karabakh region for the expansion of regional cooperation to the benefit of all parties, and informed the Georgian president of the talks he has held on the subject in the regional countries.

For her part, President Zourabichvili highlighted the historical ties between Georgia and Iran, pointed to the issues relating to the corridors connecting the Persian Gulf to the Black Sea, and emphasized the importance of economic cooperation between the two neighbors, joint investment, and cooperation in the fight against the coronavirus pandemic.

The Georgian president also elaborated on her country’s views on the regional issues.