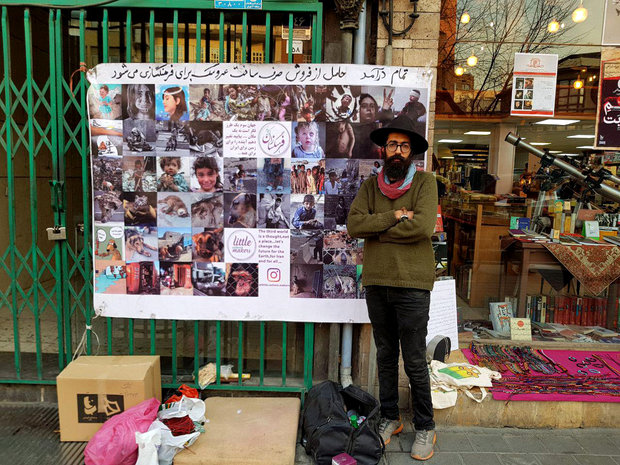 While the Iranian capital Tehran is suffering from severe air pollution and its beauties are being covered under a thick layer of black smoke, a young artist has launched an individual campaign for children.

Mehdi Rivandi sets up his stall on the ground in central Tehran displaying and selling his hand-made bracelets to provide money for his individual campaign for Iranian children.

His campaign is named “Little Culture Makers” and its main slogan is “the third world is just a mental image not a real place!”

In his campaign, he makes dolls to change the mass culture by performing puppet shows for children.

In a Farsi interview with the Mehr News Agency, Mehdi said, “I’ve launched the campaign to ease my conscience.”

Born in 1985, Mehdi has majored in graphic designing. He has also worked as a sculptor and painter for a while. But he decided to quit all his professions and began working for children.

“I’ve worked in Iran and abroad painting and making sculptures for a while but none of them satisfied me. People’s wrong behaviours, including the way they drive and their littering habit, made me angry.”

“Today they teach their children not to get anything from others and they don’t know that by such teachings they are spreading mistrust in the society. So, I decided to change the culture by doing something for the children,” he said.

Mehdi is also an environmentalist. That is why he has used waste materials like water bottles to make sculptures.