Who is behind the plot to displace the Syrian people? 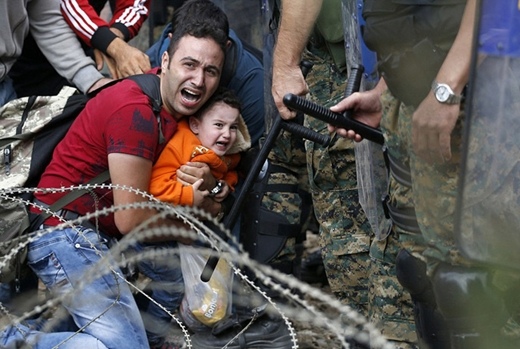 An analysis casts doubt on the spontaneity of the recent exodus of Middle Eastern refugees from Eastern to Western Europe.

The spontaneity of the recent exodus of Middle Eastern refugees from Eastern to Western Europe which has triggered a serious debate in the European Union is pretty much in doubt.

A few years after a large number of the Syrian people were forced from of their homes in a war waged by a West-Zionist-Arab coalition to topple the Syrian government, refugees are trying to move from countries like Hungary in Eastern Europe to countries such as Germany in Western Europe, either on foot or by train.

But what is surprising is that it comes at a time when the situation in Syria is not as fluid as it used to be and both Syrian government forces and armed opposition groups have taken up positions in regions under their control and unlike the early months of the deadly conflict, internal and external displacements do not happen. So the recent mass movement of Syrian refugees seems a little fishy.

The following is the translation of an excerpt of an opinion piece by Ahmad Kazemzadeh, a Middle East expert, Tasnim News Agency filed on September 5 on the sudden surge in the number of Syrians bound for Europe:

Turkey is the prime suspect, but the role of Israel cannot be ruled out. One of the reasons why Turkey might have a hand in the refugee crisis is that Ankara has long sought a permit to set up a safe region on Syrian soil along its borders to accommodate the Syrian refugees who have turned into a serious internal challenge for the Turkish government. That would cut the Turkish government’s spending and do some damage control for its failed Syria policy.

It seems that the plot of the Syrian refugee movement has been hatched and implemented by Turkey so that Ankara can use it as leverage to bring the West on board and establish an IS-free safe region.

On top of that, parliamentary elections are in the offing in Turkey where officials of the ruling Justice and Development Party are under the impression that implementation of this plot and making the EU pick up the tab and assume partial responsibility for the Syrian refugees can give them an electoral edge at home.

As for the role of Israel and its likely connivance with Turkey, it can be argued that like Ankara, Tel-Aviv is opposed to a shift in the stance of Western and Arab countries on Syria and their probable support for Russian measures to settle the Syrian crisis.

Secondly, the fresh round of Arab displacements – in Syrian and Libya – happened exactly at a time when the Zionist regime replaced the land for peace formula envisioned in the Madrid Peace Conference in 1991, with security for security plan put forth by Prime Minister Benjamin Netanyahu and his fellow rightists. Building on this approach, Israel has prolonged the Middle East crisis and set the stage for new crises like those crippling Libya and Syria.

In fact, the EU was right when it predicted that if the Middle East and Palestinian crises were not duly addressed, they could lead to a Europe-bound exodus from the crisis-stricken regions. Now the prediction has come true. Although no serious action has been taken by Europe to defuse regional crises, its steps toward recognition of the right of the Palestinians to have a state in the territories occupied in 1967 have worried Israel. That’s why Tel-Aviv benefits from creating problems for Europe.