US to Fail in Efforts to Extend Arms Embargo on Tehran: President 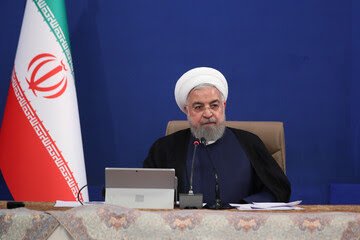 The Iranian president says the United States will fail in its efforts to extend a UN arms embargo on Iran.

President Hassan Rouhani on Wednesday underlined that the weapons ban will be lifted as part of the 2015 Iran nuclear deal in October.

“Recently, the US once again put forward a resolution in order to deal a blow to the Iran nuclear deal and [UN Security Council] Resolution 2231,” he said.

“Under Resolution 2231 and the Iran nuclear deal, an arms embargo on Iran will be lifted in October. All resolutions banning weapons trade for Iran will, in practice, be null and void,” he noted.

“[From then on,] Iran will be able to sell and buy weapons. This is one of the results of the Iran nuclear deal which is going to come into force,” President Rouhani underlined.
“Now, they have put forward a resolution against this part of Resolution 2231 in order to violate the UN document.”

“But, at the same time, our stance is clear under any circumstances. If such a resolution is adopted at the UN Security Council against part of Resolution 2231, that would be a blatant violation of the Iran nuclear deal,” he said.

“Those pushing for such a move will be responsible for any possible consequences. The responsibility for any repercussions will rest with those trying to push this agenda,” he said.

The US has presented a resolution to the UN Security Council where the country has tried to get other members on board with approving the extension of the arms ban against Iran.