US Favours Separation of Kurdistan Region from Iraq: Analyst 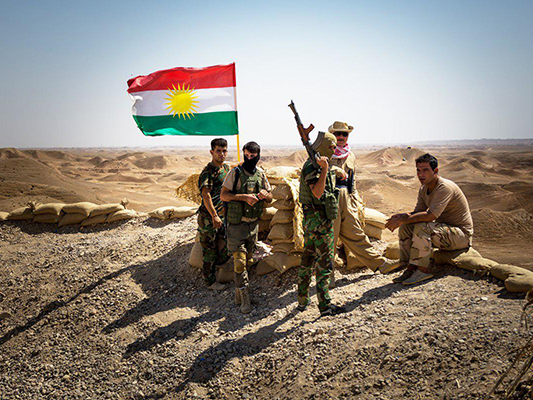 A political commentator says Washington would like to see Iraq’s Kurdistan Region separated from the country.

Political analyst Hassan Hanizadeh has, in a Farsi interview with the Mizan News Agency, underlined that the United States’ opposition to the holding of a referendum in Iraq’s Kurdistan Region later this year is a complete sham.

He touched upon the Iraqi Kurdistan’s decision to hold a plebiscite on the region’s independence on September 25, 2017, and added US officials have, under former US Vice President Joe Biden’s plan, been seeking to disintegrate Iraq and separate Kurdistan from the country.

“Based on Biden’s scheme, Iraq is to be divided into three Shiite-populated, Sunni-populated and Kurdish-populated countries,” he noted.

“Iraq’s Kurdistan Region is ready to hold the referendum under the UN supervision. Reports suggest the region, in an illegal move, began handing out birth certificates (ID cards) to Kurds residing in other countries months ago to encourage them to take part in the vote,” he said.

He added that the referendum will be held one way or another, even if countries such as Iran, Turkey, Syria and Iraq oppose it.

“This plebiscite may be postponed due to regional pressure, but it will be held one day and the Kurdistan Region will be separated from Iraq,” he said.

The analyst noted that Washington’s opposition to the holding of a referendum in Iraq’s Kurdistan Region later this year is a sham and just a show.

“The Americans even seek to disintegrate Syrian Kurds from this country,” he said.

Hanizadeh highlighted that Kurds in Syria and Iraq suffered tyranny over the past decades, but this, he added, is not good reason for them to establish an independent country.

“The region is not prepared to see the emergence of a new country, and Iraqi Kurds should know that the separation of the Kurdistan Region from Iraq will not only not solve any problems, but result in more difficulties as well,” the analyst stressed.

He concluded by saying that the creation of a greater Kurdistan is among the Israeli regime’s main priorities.

“Zionists have underlined this priority via official tribunes, in their books and in their doctrines announced in 2000,” he said.

Iraqi Kurdish parties held a meeting with President of the Kurdistan Region Masoud Barzani on June 7, 2017 without the presence of Iraq’s Kurdistan Islamic Group and the Change Movement, and decided to hold a referendum on September 25, 2017 on the region’s independence.

The decision is made as Iraq’s Kurdish parties have not yet reached a consensus on the referendum and its conditions.

After the news was announced, US State Department Spokesman Heather Nauert said that “we have expressed our concern” to Kurdistan Region authorities in that regard.

* To know more about Israel’s interest in the creation of the greater Kurdistan, read this report