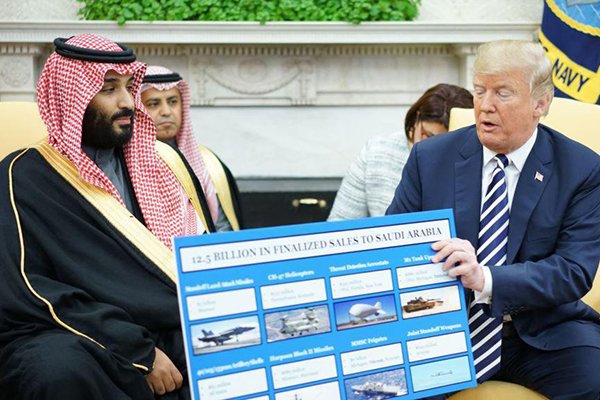 That was the analysis offered by thenewkhalij.news regarding Trump’s new policy geared to bringing Iran’s oil sales to zero.

The website wrote that the Trump administration seems to be trying to raise the chances of Iran’s rival, i.e. Saudi Arabia, by imposing an oil blockade on Iran, so that Riyadh would have the upper hand in the region.

Based on this report, Saudi Crown Prince Mohammed Bin Salman intends to increase petroleum output to 11 million barrels per day to seize Iran’s share of the global market.

According to the news website, the rise in crude output by Saudi Arabia, which has been coupled with a drop in crude prices and austerity measures over the past years, could be a ray of hope to save the country’s economy and be an opportunity for Bin Salman to implement his reforms.

However, added the website, Trump’s key objective is to give Saudi Arabia an economic edge which would weaken Iran’s nuclear and military programs in the region as well.

Trump withdrew from the Iran nuclear deal and reinstated sanctions against the country at the request of Saudi Arabia, Israel and other enemies of Iran, wrote the website.

By exerting economic pressure on Iran, Trump also seeks to make the country give up its arms programs and contain Iran’s allies which are a threat to Tel Aviv and Riyadh, thenewkhalij.news added.

The Saudi heir to the throne had earlier told Wall Street Journal that the world has turned to economic pressure in order not to get involved in a direct military war with Iran.

Saudi Arabia’s oil production is expected to reach 10.8 to 10.9 million barrels per day by July.

Meanwhile, a senior US State Department official announced that Brent Crude prices rose by more than 4% last Thursday, and that the US will make customers of Iran’s oil stop purchasing petroleum form the country.

According to the report, Hootan Yazhari, a senior official at the US bank of Merrill Lynch, has also said that if the Saudis hope to bring about changes in their country, the decision made by the US can put them in a position of power.

The website added that if crude prices are stabilized at around 70 dollars, it can help improve Saudi Arabia’s economy and decrease the unemployment rate in the country, which currently stands at over 12%, and will also help ease the country’s austerity policies which saw tax hikes of up to 5 percent in January and cut government subsidies for energy commodities and led to a rise in electricity and gasoline prices.

According to the report, imposing an economic blockade on Iran can also ease economic pressure on Saudi Arabia, which is the result of the Yemen war. The Saudi-led coalition launched a military operation in the strategic port city of Hudaydah in Western Yemen last week and regards gaining control of the port city as a watershed in the Yemen war.

Saudi Arabia’s gaining power as a result of economic sanctions on Iran will also help implement the United States’ plans in the Middle East with the support of Riyadh, including the so-called deal of the century in occupied Palestine, the Syria war and arms sales to Middle East countries.

Meanwhile, veteran journalist and Editor-in-Chief of the Iran Front Page news website Mahmoud Askarieh believes the ambitions of the Saudi crown prince, who has put his tentacles on the bulk of petrodollars, has worrying repercussions for the continuation of his rule, and these consequences will gradually come to light.

“Financial and arms support for Takfiris in the Meddle East, Europe and the US, in addition to Saudi Arabia’s costly aggression on the poorest Arab country in the region with the help of hired fighters, together with Trump’s trip to Riyadh, drained the Saudi kingdom’s coffers of hundreds of billions of dollars,” he noted.

“At a time when the crown prince is preoccupied with the “Saudi Arabia 2030” dream, everything can be compromised, even bonds between clans as well as pleasantries and courtesy in traditional relations between royal people. The situation makes bin Salman blackmail and extort well-known and rich people of the Al Saud dynasty. Even the prime minister of an independent country like Lebanon is not spared. He, along with dozens of Saudi princes, goes to the five-star hotel, so that the prison for princes and officials would be different from the commoners! All this generated hundreds of millions of dollars, which could be used to continue the war on Yemen until victory, to prove themselves to Trump, and sponsor militants in Iraq and Syria, but that is not enough!”

Askarieh went on to say that the situation in Saudi Arabia is unfolding in such a way that the country is so much dependent on oil revenues. “Saudi Arabia would not be able to overcome such problems unless regional crises are fuelled, and the hope for peace reaches the lowest level it has ever been since World War II. By pulling out of the Iran nuclear deal, Trump wanted to kill several birds with one stone!”

“Unlike what we hear from Trump these days, the old merchant had pinned his hopes on a rise in crude prices, so that investment in the United States’ oil industry would turn into a lucrative business, and China – a main rival and the biggest consumer of energy which has made American capitalists worried, would be brought to its knees.”

However, he added, Trump had not thought about a rise in petrol prices, the US citizens’ discontent, and the coincidence of oil price hikes and the congressional elections; otherwise, he would start intensifying crises in different parts of the world after defeating Democrats in the November elections.

“It can truly be said that the reinstatement of merciless sanctions on Iran’s economy, at the expense of disrupting the energy market, is a joint scenario fabricated by the US under Trump, Saudi Arabia under bin Salman and Israel under Netanyahu. Of course, this scenario will please Putin-ruled Russia as well. Expensive crude oil is a cake a piece of which could go to the rival if, behind the scene, there is a rivalry going on between Trump and Putin,” he added.