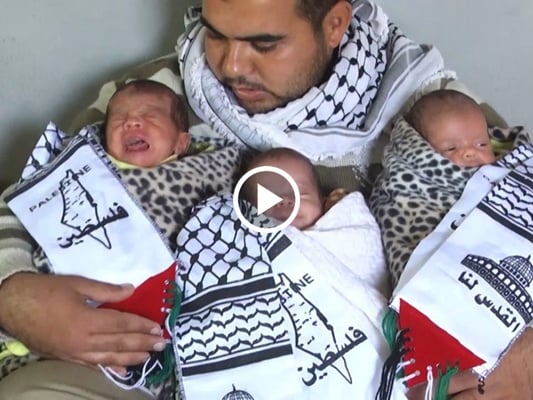 A Palestinian couple has chosen symbolic names for their new-born triplets to show their protest against US President Donald Trump’s decision to recognise Jerusalem al-Quds as the capital of the Israeli regime.

The couple has named the triplets Quds (the Arabic name for the city of Jerusalem), Palestine and Easima (literally: capital in Arabic).

According to Nidal and Islam al-Siqaly from Khan Yunis, their symbolic act of protest demonstrated their affection towards their homeland and their opposition to Trump’s decision, with Nidal, the father saying, “What I did is not enough, I offer myself and my children, my wife and all of us for Jerusalem.”

All other family members also have symbolic names as Nidal pointed out. “I am Nidal [Struggle, in Arabic], my wife is Islam, my elder daughter is Dalal Mughrabi [a dead Palestine militant].”

Islam, the mother, echoed Nidal’s sentiment adding, “God willing, our Lord will give us a new daughter and will name her Eternal so that Jerusalem will remain the eternal capital of Palestine.”

The three babies were born at the end of last year just after Trump’s decision.