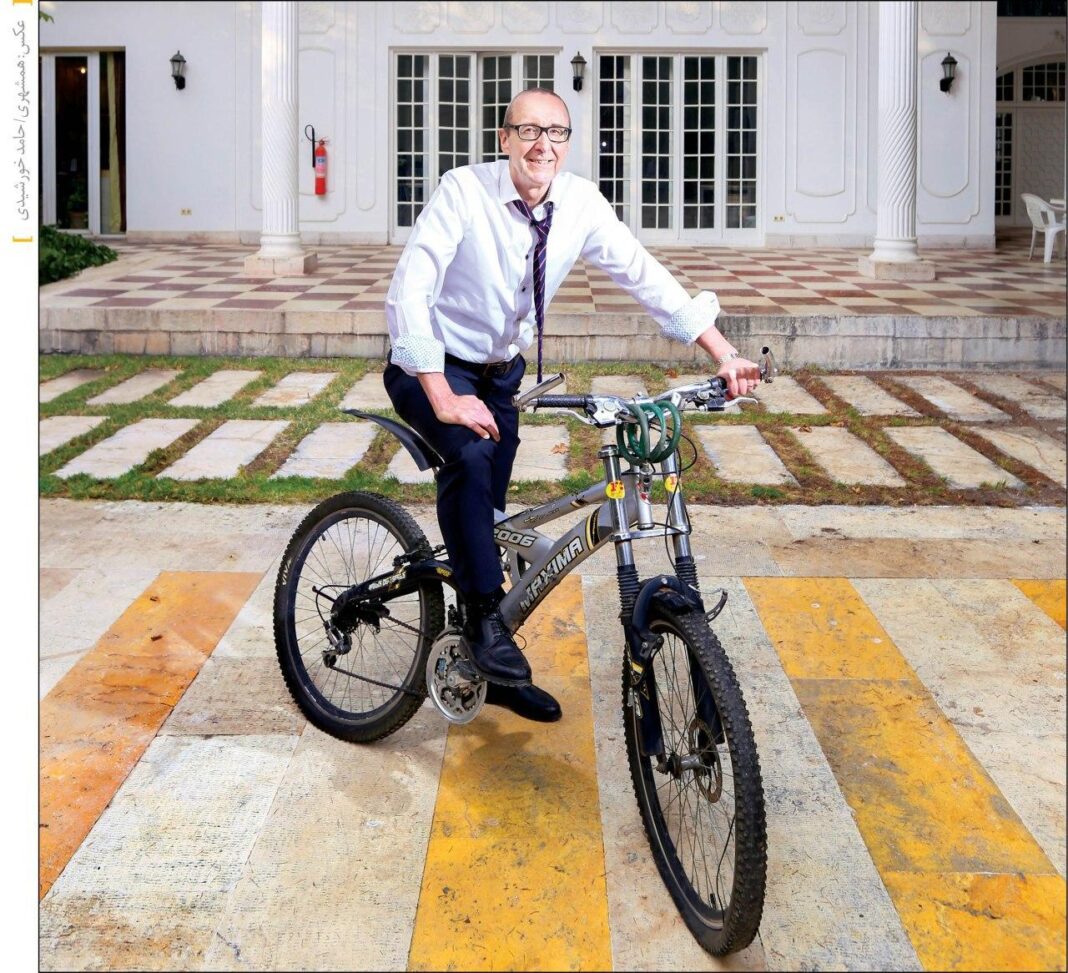 As Iran marks the National Day of Tehran, Austrian Ambassador to Iran Stefan Scholz has praised the capital city as a lively city with a dynamic culture.

Iran-Austria diplomatic relations go back more than 160 years. The Austrians have described the relationship as a “160-year-old path to friendship.”

The Austrian ambassador to Tehran believes the reason behind the long history of relations between the two nations is a win-win relationship between the two sides. He believes Iran should be seen not as a country, but as a civilization.

54-year-old Scholz holds a PhD degree in Political Sciences. In an interview with the Hamshahri newspaper, Scholz expressed his views on his stay in Iran and living in the capital city.

How many of Iran’s provinces have you visited during your three-year stay, so far?

Well, 25 provinces, I think. Of course, I should say that none of them was a pleasure trip. They were all business trips. We draw up plans to establish a link between those working the private sectors of Iran and Austria and to boost cultural cooperation.

What is your general understanding of Iranian people and the Iranian culture?

What I can say is that Iran is something more than a country; Iran is a civilization.

Iran enjoys geographical diversity and a variety of traditions. Iran’s culture is a rich one. Each region has its own features. In order to get familiar with each and every region, one has to visit there, talk to its people and understand its potential.

If a friend asks you to name five destinations of your choice in Iran, which cities would you choose?

It is a difficult question. Well, Isfahan and Shiraz are always in my heart. Isfahan is really beautiful. Persepolis and Naqsh-e Rostam (an ancient necropolis located near Persepolis) are the living history of this country. I should say that all countries I have visited have, in one way or another, influenced my mind. Each one of them has its own features.

Which part of your life in Tehran has been more attractive?

To tell the truth, I wouldn’t have thought that I might get so much involved in diplomatic work. Not a single week or day passes without a story about Iran being covered by world media. This makes you, as an ambassador, a high-profile figure in your own capital.

In fact, diplomatic work in Tehran is a 24/7 job. I have experienced this only here. You need to be available both for your country and the host country round the clock. It requires so much energy.

How about city life in Tehran?

Tehran is a lively city with a population of 15 million, which is almost double that of Austria. Tehran has a dynamic culture.

I have watched concerts at Vahdat Auditorium numerous times, concerts which begin between 9 to 9:30 and run until midnight. These hours [for performances] are unusual in Europe. The day after we have watched a concert, we go to work with bloodshot eyes, but it is really worth it.

Before the coronavirus outbreak, I had begun visiting restaurants. Tehran restaurants are really fantastic. Even in Vienna you cannot find ones similar to some of the restaurants in Tehran.

The quality of food and service as well as the ambience of restaurants are unbelievable both in modern and traditional restaurants. Old Tehran buildings which have been renovated and made available to the public are really attractive. Some of them have turned into cafes and include a space for reading books as well.

Do you use public transport?

Yes, definitely. The underground system in Tehran is excellent. Before the coronavirus outbreak, my wife and I used the underground a lot. The tube in Tehran has made access to different parts of the city easy and is still developing. Special bus lanes are fantastic, too. Once last year, my wife and I decided to go from Tajrish square to the Imam Khomeini International Airport by underground. It was an interesting experience.

Which part of your life in Tehran has not been so pleasant?

Well, the traffic. There are days when I have, let’s say, three meetings in different parts of Tehran. Afterwards, I make a calculation and see I spent six hours in traffic.

Where would you normally go if you want to take a walk in the city?

Our home is near Tajrish. On many occasions, my wife and I walk to the Tajrish square. The Tajrish bazaar is very attractive.

We also frequently go, on foot, to Darband and Darakeh (two recreational resorts in northern Tehran) as well as Saadabad Palace and Niavaran.

Tehran is among the few capitals in the world in front of which lies a chain of mountains. One can go hiking in the mountains at weekends easily and in the shortest possible time.

In downtown Tehran, we definitely choose the Artists’ Park. Vali-e Asr street is an ideal place for waling, too.

How has the coronavirus outbreak affected your life?

We were among the few embassies which did not close down during the pandemic. We tried to get the jobs done by working in shifts. Overall, we have been continuing our activities and have always maintained our contact with the Iranian Ministry of Foreign Affairs.

I should say that all these were made possible through the good offices of the Iranian Ministry of Foreign Affairs.

How has your family life been in Tehran?

I have five children. They have all grown up. They sometimes visit us and stay with us for some time. Two of them underwent surgery in Tehran some time ago. It was not a difficult operation, but I should say that medical advances in Tehran are extraordinary. The quality of medical services in Tehran equals that in Vienna.

My family and I have visited Tehran museums several times. Museums in Tehran are very interesting, namely the gemstones museum and the one at the Golestan Palace. And once, we along with a number of Austrian mountaineers and several EU ambassadors climbed Mount Damavand. It was a wonderful trip.

What changes have you seen in Tehran during the time you have been living in the city?

I should say I have witnessed rapid modernization in Tehran. The effects of modern technologies are really conspicuous in urban life in Tehran. Online shopping has grown considerably. Many of the things that you find here are not available in our country because of regulations.

I sometimes ask Austrian firms if they have seen this application. It is easy to buy something or send something somewhere. We bought potatoes from a farmer around Tehran. He brought a POS machine and we made the payment easily with our bank card.

As far as these areas are concerned, Iran is far ahead of many European countries, including my own country.

The service sector in Tehran is growing fast. Iran has what it takes to turn into an economic heavyweight in the region.

Start-ups have been wonderful. This is exactly the same domain which I would like Austria to look up to as a role model and learn from the younger generation in Iran.

Iran has undoubtedly been one of the leading countries when it comes to the technological revolution in the information technology and communications sector.

What has led to the sustenance of relations between the two countries?

I should say that my presence in Iran was coupled with a feeling of familiarity.

I have travelled to different countries which are geographically more similar to Austria than Iran, but I never got that sense of familiarity in any of those countries.

Let me tell you something simple and interesting. For example, the point that you and we have similar jokes means we find the same things funny. In my idea, it is only rapport and understanding between the two nations that can make mutual cooperation last for 500 years.