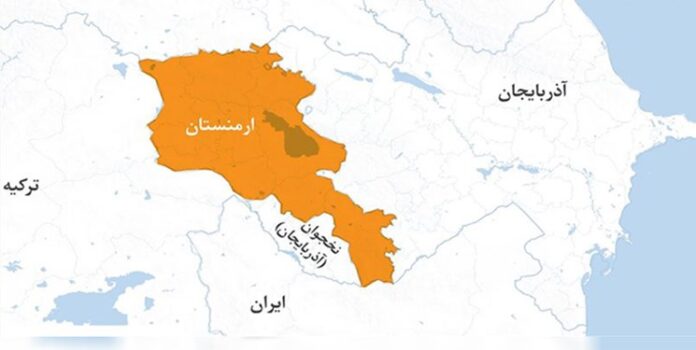 Fars News Agency: Tension is high along Iran’s northwestern borders and many videos have emerged showing the deployment of Iranian armed forces to the areas on the Armenian and Azerbaijani Republic’s border.

How did it start?

Several issues have been the main cause of tension in the region: First, the military forces of the Republic of Azerbaijan have blocked the Goris-Qapan axis and do not allow heavy vehicles to pass through this route. In addition, the joint military maneuver of Azerbaijan Republic, Pakistan and Turkey in recent days near the Iranian border was another issue that caused sensitivities in our country.

Another issue was the sharp and undiplomatic remarks of the members of Azeri Parliament against the territorial integrity of the Islamic Republic of Iran. The last thing was the possibility of border changes and a deal over some areas in the Armenian territory and the Republic of Azerbaijan, as a result of which part of the territory of Armenia bordering the Islamic Republic of Iran will be ceded to Azerbaijan Republic and Armenia will effectively lose its border with Iran.

What is the context of this story?

The statements of Azeri officials or some movements such as the ban on Iran’s exports to Armenia are not issues that can escalate the conflict to this high level. What is important is that the United States and Israel would scramble for proxy actions on the northwestern borders of our country.

Political analyst Saadollah Zarei wrote in a note, “The Armenian government and Prime Minister Pashinian, who is considered pro-Western compared with the former government, have joined the US-Turkey project in the hope of enjoying political and economic benefits, which is a betrayal of Armenia.”

In this case, instead of a direct and obvious presence, the United States uses the Zionist regime’s nearly 30 years of security ties with Azerbaijan Republic and Armenia. Although exact figures are not available, numerous reports indicate the growing security presence of the Israeli regime, especially in Azerbaijan Republic, mostly at the “Qibla Air Base”.

The number of Israeli forces is between 500 and 1,000, while this criminal regime has gained significant influence in the last decade in the pillars of Azerbaijan Republic and the family of Elham Aliyev such that the Zionist leaders referred to Azerbaijan Republic as “Lebanon of Israel”. In this way, we have said, we can entangle the Islamic Republic in a long-term border security challenge and blunt its impact in the region. However, it’s absolutely clear that such claims and their capability to translate them into action are far apart.

What is clear is that a trans-regional event is taking place that is the result of linking neo-Ottoman tendencies with Zionism, and in the meantime, Turkey is trying to play its role well in line with these developments.

What is the mistake of Azerbaijan Republic and Armenia?

For many years, Azerbaijan Republic has been a haven for pro-Israel currents and even allowed the direct presence of Zionism in the region. It has forgotten that in the time of serious and historical crises in this region, it was Iran that supported Azerbaijan Republic’s territorial integrity and did not allow the extra-regional powers to disrupt the strategic order of this region. Iran has also played its rightful role as a neighbor to Armenia.
Iran has tried to have secure and strong neighbors according to a grand strategy. But now Armenia, with its pro-Western president, and the Republic of Azerbaijan, with a pro-Israeli government, are seeking to play a proxy role in confronting the Islamic Republic of Iran. Azerbaijan Republic is a Shia Muslim country and will naturally, in the short term, come into social confrontation with the anti-religious and anti-Shia currents of the West and Israel. This is the main mistake of the Republic of Azerbaijan.

Armenia must also realize how important countries in the region play their roles, and in this case, if the important and influential role of such countries as Iran and Russia is not taken into account, it will certainly not be possible to move forward in regional equations.

What does Iran want?

Iran pursues two main issues: First, Iran does not accept the strong presence of Israel on its borders and cannot allow the enemies of the Iranian people to equip themselves around Iran’s borders. The second issue is that Iran can in no way accept border changes in its northwestern regions. The principle of good neighborliness is an issue that neighbors should respect. Iran has always wanted security and power for its neighbors, and they are also expected to reciprocate.