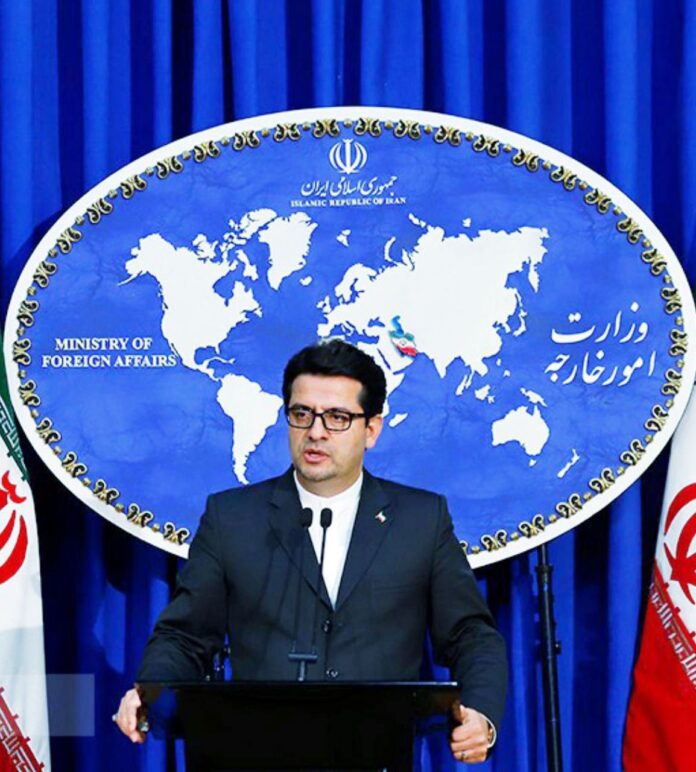 Spokesperson for the Ministry of Foreign Affairs of the Islamic Republic of Iran Seyyed Abbas Mousavi has expounded on the latest measures taken by the ministry in close cooperation and coordination with the Health Ministry in order to minimize the adverse effects of the coronavirus epidemic.

In comments on Tuesday, Mousavi answered questions from reporters about the measures the Foreign Ministry has taken to get cooperation and assistance from the other countries and international organizations in providing the supplies necessary for the battle with the coronavirus in the country.

“After the Ministry of Health and Medical Education authorities announced and confirmed that the coronavirus has broken out in our country, Dr. (Foreign Minister Mohammad Javad) Zarif established a framework for the efforts to minimize the adverse economic, social and political effects of the coronavirus spread, and, accordingly, all relevant sections of the Ministry of Foreign Affairs and our country’s Embassies were activated in this regard,” the spokesperson noted.

“In relation to the issue, holding of a briefing and question-and-answer session at the Foreign Ministry was put on the agenda, attended by all foreign ambassadors residing in Iran and representatives of the international institutions in Iran including the World Health Organization and the representatives of the Health Ministry,” he added.

“In that meeting, the World Health Organization’s envoy described Iran’s capability and performance (in controlling coronavirus) as an exemplary example. Moreover, the WHO authorities in Geneva have also mentioned Iran’s basic capabilities to manage the crisis and our country’s proven record of successful management of the previous crises threatening the global health and hygiene,” the Iranian spokesman stated.

Asked about the Ministry of Foreign Affairs’ role in supplying the Health Ministry’s demands from the other countries and international organizations, Mousavi said, “One of the primary measures by the Ministry of Foreign Affairs was to present a unified list of the country’s preventive and medical needs to contain coronavirus to the United Nations, the relevant international institutions, the resident ambassadors, and the Iranian missions abroad in order to maximize the potential of the international aids.”

As a result, Iran has received very helpful aids from the World Health Organization, including a large consignment that was shipped to Iran on Monday, March 2, with a flight operated by the United Arab Emirates, the spokesman stated.

He also noted that Iran has received medical supplies from the UNICEF, China, Turkey, and Austria, adding that the assistance provided by Germany, the UK and France has also arrived in Iran on Tuesday morning.

According to the spokesperson, a remarkable number of other countries are also considering the list of Iran’s needs and delivering aids.

Separate financial assistance has been also offered by Germany, France and the UK which would be given to Iran through channels of the relevant international organizations, he added.

“These aids will complement the constant and effectual efforts made by the Islamic Republic of Iran’s administration and the Ministry of Health and Medical Education to control the situation,” Mousavi noted.

The spokesperson expressed the Islamic Republic of Iran’s gratitude for the recent humanitarian assistance, stressing that effective battle against the outbreak of coronavirus requires efficient international cooperation.

Asked about the limitations placed on the fulfillment of the country’s demands under the unilateral and cruel sanctions imposed by the US regime, Mousavi said, “The conditions created by the outbreak of coronavirus in the country have further laid bare the negative impacts of the US’ illegal sanctions on the people of Iran, particularly on the vulnerable groups, before the eyes of the global community, the European countries in particular.”

Asked about any other measures being pursued by the Ministry of Foreign Affairs to address the issue, the spokesman stated, “Various political activities, including the contacts that the Minister of Foreign Affairs, the managers of the Ministry, and the Iranian missions abroad make with their counterparts and with the relevant bilateral and international institutions, are among the other measures that are being pursued in order to attract medical and health assistance, get consular cooperation concerning the travels by the Iranian and foreign nationals, and to remove the border and trade restrictions by taking the precautionary health measures into consideration.”

“In this regard, a number of the border (crossings) between our country and the neighbors have resumed their activities, and, God willing, the situation will move towards normalization faster after the other countries make sure that the high standards of health and safety are met across the country,” added Mousavi.

Moreover, an extraordinary meeting of the Foreign Economic Relations Coordination Headquarters was held at the Ministry of Foreign Affairs to examine the problems in the trade exchanges with the neighboring countries in the wake of the coronavirus outbreak in the country.

In the meeting, the representatives of the Iranian ministries and executive organizations as well as the private sector praised the Ministry of Health and Medical Education for its efforts and measures to fight against the coronavirus epidemic. They also examined the latest activities for allaying the concerns of Iran’s foreign trade partners and made a series of decisions to facilitate the cross-border travels and the trade interaction with the neighboring countries.

Mousavi finally unveiled plans for consultations between the Iranian Minister of Foreign Affairs and a number of his European counterparts about the coronavirus outbreak, noting that consultations will be also held with the European Commission in order to take advantage of its capabilities to handle the issue.