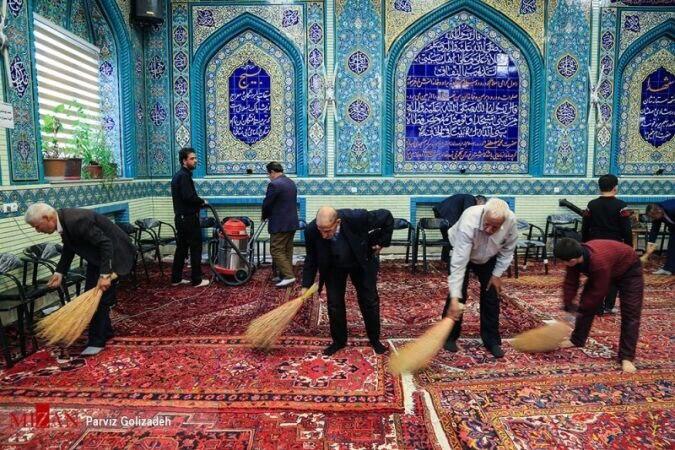 People in western and northwestern Iran have interesting customs and traditions to mark the holy month of Ramadan.

Some of the most popular traditions and rituals practiced during this month are described below.

It has been hundreds of years that Azeris (people from northwestern provinces of East Azarbaijan and West Azarbaijan) begin practicing the Qabakhlama Tradition 3 to 10 days before the arrival of the month of Ramadan to honour the occasion. They do not mark Ramadan by fasting only. Rather, they clean their houses and mosques for one month of praying and worshipping. Local women, especially those in villages, attach special importance to cleaning homes because they believe a house which is not cleat as Ramadan begins will not be blessed during the holy month.

In some parts of East Azarbaijan province, it is customary for each family to sacrifice an animal, one that they can afford, and then use that meat to cook meals throughout the month of Ramadan. They believe doing so will bring blessings to the house. They would make meals served before dawn and at fast-breaking time at dusk with this meat. Of course, the fast-breaking table in this locality always has two items on it: dates and salt. People in East Azarbaijan believe Imam Ali would break his fats with dates and salt; hence, the same should be on their table, too.

In northwestern Iran, it is a custom to look at oneself in the mirror after Ramadan begins at recite prayers for the souls of Prophet Mohammad and his Household. Still many of the elderly grab the mirror and move it round themselves and other family members at home after seeing themselves in the mirror in order to ward off evil and vice. This tradition is based on the belief that the hearts of the faithful should be clean like a mirror.

In most cultures, it is a custom in Ramadan to wake up neighbours and people in the neighbourhood at dawn when people have Suhoor. In northwestern Iran, a ritual called “Obashdan” is practiced whereby people wake up their neighbours at the time of Suhoor. In the past, villagers would specify the time of dawn as well as the call-to-prayers time by tracking the movements of stars. In this region, people now wake up neighbours and locals by reciting prayers at mosques as well as banging on the drums and home doors.

Another Ramadan tradition in northwest Iran is the “Tabagh Orooji” ritual which is performed for families whose daughter or son has just got married. In this tradition, the family of the groom puts some clothes, shawls, headscarves and different types of cookies and fruit on a tray and takes it to the newlywed couple’s home as a Ramadan gift.

Azeri women decorate tables with colourful foods in Ramadan. One of the foods cooked in Ramadan and served at fast-breaking time at dusk is the “Tareh-Halvasi” pudding.
The traditional bread known as “Yaghlifatir” is another popular food cooked in the month of Ramadan and found on the tables of most Azeri people. If someone wants to give a votive offering or a gift in Ramadan, they cook this type of bread. They believe they feel less hungry when they eat this type of bread