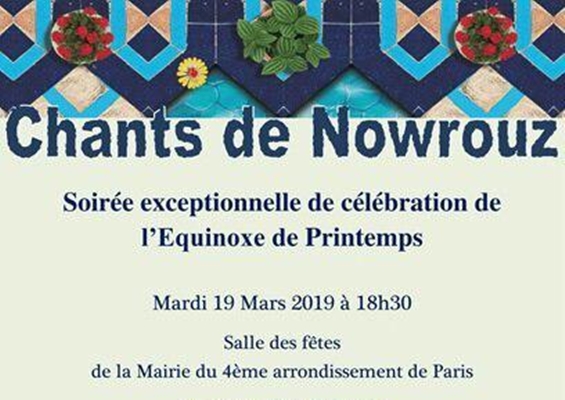 A ceremony is to be held on the eve of the Persian New Year, or Nowruz, in the French capital Paris with the aim of strengthening inter-cultural relations between different nations.

The event dubbed “Chants of Nowruz” is organised by Iran-France Centre in collaboration with Afghan nationals in France and “Paris Tehran Magazine.” 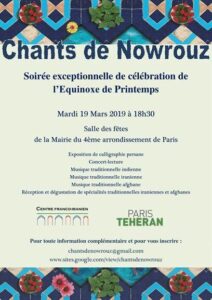 The ceremony will be held with the participation of Iranian, Afghan, Indian, and French artists in the municipality hall of Paris on Tuesday, March 19, 2019.

They will introduce Iranian and Afghan dishes to make the French people familiar with Haft Seen Sufra.

At this ceremony, calligraphy works of Vasheqani Farahani will be put on show and Pejman Memarzadeh, the musician and leader of Iranian orchestra in France, will speak about Iranian music and Nowruz tradition.

Nowruz is the day of the vernal equinox, and marks the beginning of spring in the Northern Hemisphere. It also marks the first day of the first month of the Iranian calendar, and has been celebrated in Iran, Afghanistan, Tajikistan, India, Uzbekistan, Pakistan, Azerbaijan, Iraq, Kazakhstan, Kyrgystan, and Turkey since ancient times.