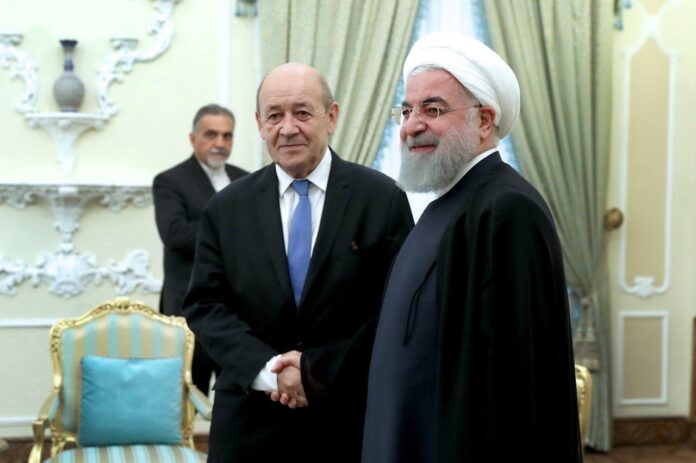 Iran’s President Hassan Rouhani says if the nuclear agreement breaks down, it will be a matter of regret for all the parties to the deal, but the Islamic Republic is ready for any possible conditions.

Speaking in a Monday meeting with France’s Minister of Europe and Foreign Affairs Jean-Yves Le Drian, Rouhani noted that the Joint Comprehensive Plan of Action (JCPOA) is a test for all negotiating parties.

“Remaining committed to the accord would prove to the world that the negotiation and diplomacy is the best way to solve problems, but the collapse of the deal means that political talks are a waste of time,” he said.

Rouhani stressed that all the negotiating parties must adhere to their commitments regarding the deal underlining that Iran will never be the first party to violate the agreement and believes that this deal is effective in developing regional and international collaborations, and also in creating stability, bringing peace, and building trust.

The Iranian president further mentioned that Iran and France share the same vision on the JCPOA and both countries believe it must be maintained.

“Fortunately, today, via the nuclear deal a suitable environment has been created for the development of mutual relations and collaborations. We must move towards achieving the common goals and interests of the two nations in this direction.”

The President also referred to the historical and friendly ties between Tehran and Paris in various fields including trade, economy, industry, agriculture, culture, transportation and energy saying that the two governments are determined to establish and strengthen mutual friendly ties.

“There are no limits for the Islamic Republic of Iran to develop and boost relations and collaborations with France.”

Pointing to the necessity of mutual cooperation between Iran and France on regional stability and security, Iran’s president said, “France and the Islamic Republic of Iran have played a positive role in resolving the recent problems in Lebanon, and should collaborate in keeping peace in this country and preparing the grounds for an election that brings about political vitality and stability in the country.”

Rouhani said the security of the Persian Gulf is an issue of significance for the region. Pointing to the Yemen crisis, he added, “It is an international and humanitarian responsibility to do our best for the sake of Yemeni people who are suffering from bombardments, diseases and many [other] troubles.”

He noted that these efforts must be made towards the implementation of a ceasefire, ending the war, stopping the massacre of the Yemenis, and also sending of humanitarian aid.

Referring to Syria’s problems and the pains suffered by its people, Rouhani underscored that the Islamic Republic of Iran has been present in Syria at the request of the Syrian government to fight terrorism, but it has not been completely eradicated, and it still threatens other countries.

Rouhani further said that the fight for the complete elimination of terrorism and helping the Syrians is a high priority for Iran and France in the region.

“There is no way but to strengthen the central government in Damascus to resolve the Syrian crisis.”

For his part, Le Drian emphasized his country’s respect for the JCPOA and Paris’s interest in maintaining the nuclear deal.

“The IAEA reports indicate that the Islamic Republic is fully committed to its obligations, and France will do its utmost to preserve the nuclear agreement.”

Le Drian also pointed out that Tehran-Paris economic and trade ties have increased dramatically within the past two years right after the nuclear agreement.

“We are interested in the development and boosting of relations in all fields with the Islamic Republic of Iran. To this end, France has considered some ways to facilitate the expansion of mutual economic cooperation in order to boost the trade dynamism established between the two countries,” added Le Drian.

He further mentioned that the EU considers the nuclear deal with Iran as a fundamental document that promotes regional stability and security.

“Iran and France can work together to promote regional stability and security, in particular to prevent humanitarian catastrophes in the region and to solve regional crises.”

“We are willing to cooperate and consult with Iran as a friendly country on all topics of interest,” concluded France’s Minister of Europe and Foreign Affairs.