One of the common concerns for parents with babies is nappy rash, a condition which leads to restlessness in infants.

If nappy rash is not treated, it will result in infectious and fungal skin diseases. Fungal infection is more prevalent among babies who take antibiotics. Nappy rash comes out in a rash and gradually develops into one consistent red-colored spot. 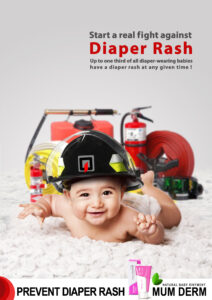 One of the most useful and simplest ways to control and treat nappy rash is to change the baby at short intervals. Each time parents change the infant’s nappy, they had better not wrap it up immediately. They should let air circulate around the baby’s skin for some time to help alleviate the burn.

Among the key factors which make it all the more necessary to treat nappy rash promptly is the possibility of developing skin infection, fungal diseases and severe sensitivity, which could turn into ulcers in the long run. So, parents should not ignore the possibility of coming down with soreness and infectious skin disease.

The major cause of nappy rash is moisture. Children urinate a lot coupled with a watery stool. Even highly-absorbent nappies will leave behind some moisture on the baby’s fine skin. An infant whose skin remains in contact with a dirty nappy for a long time may develop nappy rash.

Until 150 years ago, there was no chemical medicine, and doctors used to prescribe medicinal herbs for their patients. Thanks to the country’s ecological features and age-old history in traditional medicine and herbal remedies, grounds are prepared in Iran for conducting specialized scientific research on the treatment of various diseases through identification and production of medicinal herbs. Arnebia euchroma L is one of those medicinal herbs, which has been used throughout the history in healing dangerous wounds.
Daru Darman Salafchegan Company, as a knowledge-based producer of herbal medicine in Iran, has managed to produce an herbal ointment named “Mum Derm”, which helps mothers relieve their babies of nappy rash.
The company has passed all clinical tests and obtained the required licences for the ointment at the international level. It is now prepared to sign deals with applicant companies across the world, offering its herbal products based on (up to) two-year usance contracts.