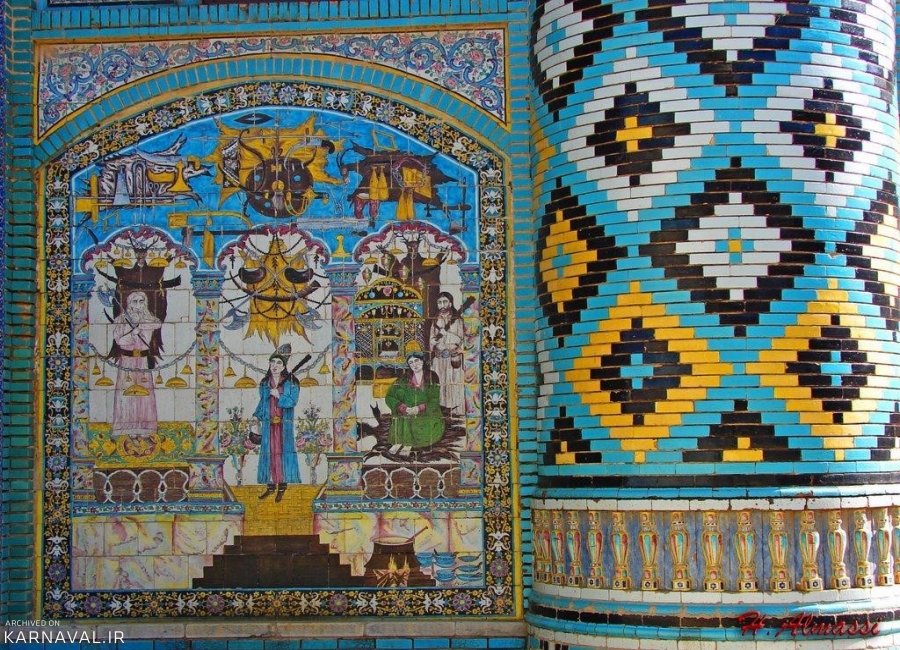 The Takieh of Moaven-ul-Molk in western Iranian city of Kermanshah is the country's finest Hosseinieh, a distinctively Shiite shrine where plays are acted out during the Islamic month of Muharram to commemorate the martyrdom of Imam Hussein, the third Shiite Imam.

The Tekyeh of Moaven-ul-Molk in Kermanshah is home to beautiful tiles depicting a wild gamut of images, from Quranic scenes to pre-Islamic motifs including Shahnameh kings, European villages and local notables in 19th-century costumes.

In the jargon of Iranian Shiites, a tekyeh is one of the places where mourning ceremonies, especially Muharram rituals, as well as Islamic passion plays are held.

Before tekyehs came into being, people would hold ceremonies in different neighbourhoods or would converge on main squares to mourn the Ashura event. Tekyehs were established during the Qajar era.

The Moaven-ul-Molk Tekyeh is one of the oldest ones in Iran. It is known as the world’s largest miniature-decorated tekyeh. It has always been welcomed by visitors and tourists due to its extraordinary architecture and tilework.

The Moaven-ul-Molk Tekyeh lies six metres lower than ground level. After entering the main gate, one has to walk down 17 steps to get to the entrance hall. The building is comprised of three parts, including the hussainiya, the zainabiya and the abbasiya.

At the building, there are numerous doors which, in the past, helped hold religious ceremonies more conveniently and allowed mourning processions to get in and out easily.

Two museums have been set up in the south of the abbasiya section: the Kermanshah Anthropology Museum and the Kermanshah Garment and Jewellery Museum.

Here are ISNA’s photos of the historic building, dating back to Qajar era: