A look at Iranian newspaper front pages on Sept. 28

IFP took a look at front pages of 18 dailies.

Front page headlines of Iranian dailies on Sunday mostly focused on the 7th round of nuclear talks in New York and their failure to produce the intended results. The inconclusive negotiations drew remarks from different politicians and prompted them to adopt a wait-and-see approach until the 8th round of the talks later this year. Comments by Parliament Speaker Ali Larijani in response to the speech by British Prime Minister David Cameron at the UN General Assembly were among top stories. Drawing as much attention was the silver medal that Iranian female shot-putter Leila Rajabi bagged for the first time in the Asian Games. Another headline-grabbing story of the day was a message by the Supreme Leader to Ayatollah Mahmoud Hashemi Shahroudi, a top member of the Assembly of Experts, in which the leader expressed his heartfelt condolences on the passing of Ayatollah Shahroudi’s mother.

Abrar: “We have neutralized the sanctions imposed on the military sector,” said the commander of Aerospace Force of the Islamic Revolution Guard Corps.

Abrar: “If ISIL militants dare to approach Iran’s borders, we will target [their positions] deep in Iraqi territory,” warned the commander of the Iranian Army’s Ground Forces. 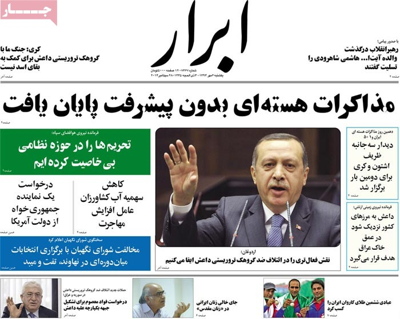 Afkar: “Britain is in no position to lecture Iran,” the Iranian parliament speaker says. 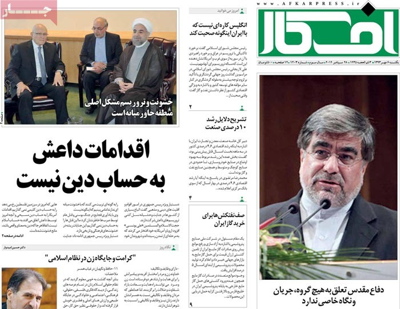 Aftab-e Yazd: “Do not get tough on foreign tourists,” an MP has urged officials. 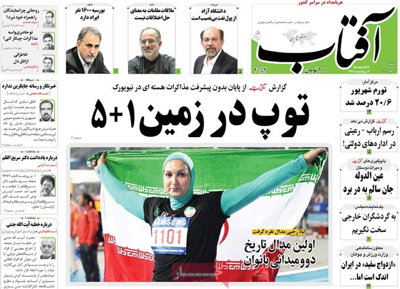 Arman-e Emrooz: “Seventy years behind bars for 13 convicted of corruption.” Thirteen people found guilty of a raft of charges including graft, bribery and forgery have been sentenced to 71 years in jail combined. According to the verdict, which is subject to appeal, the convicts will also have to pay hefty fines. 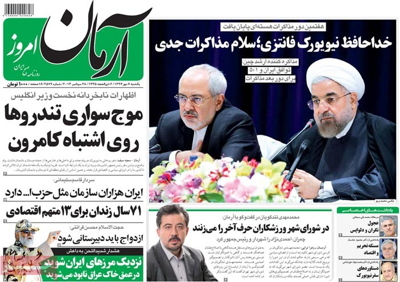 Asia: “Mexican businessmen see Iran as a gate to the Middle East,” the Mexican ambassador to Iran said in an interview with the daily.

Asia: “It remains our fervent hope that Iran and six powers can in the next weeks come to an agreement, said US Secretary of State John Kerry. 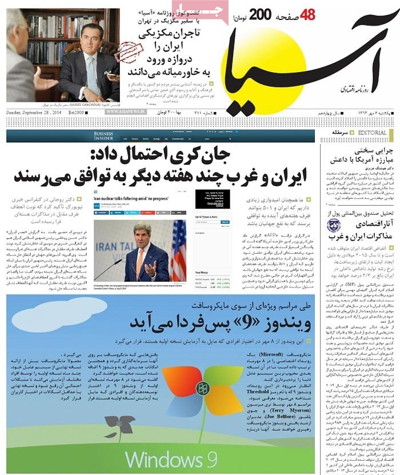 Donyay-e Eghtesad: “Different interpretations on New York nuclear talks” is the report in which the daily quotes different politicians involved in the negotiations after the talks failed.

Deputy Iranian Foreign Minister Seyyed Abbas Araghchi: “We are yet to reach a common understanding about fundamental matters.”

US Secretary of State John Kerry: “It remains our fervent hope that Iran and six powers can in the next weeks come to an agreement.”

French Foreign Minister Laurent Fabius: “[There has been] no significant progress in nuclear talks.”

German Foreign Minister Frank-Walter Steinmeier: “We have never been so close to a deal as now.” 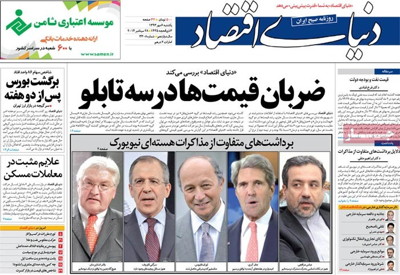 Ebtekar: “The New York passengers [Iran’s nuclear negotiating team] come back home empty-handed; talks have stretched into an 8th round.”

Ebtekar: “The first historic medal in track and field for Iranian women in the 2014 Asian Games.”

Ebtekar says a plan to separate drinking water from water for other purposes including bathing is on the agenda. 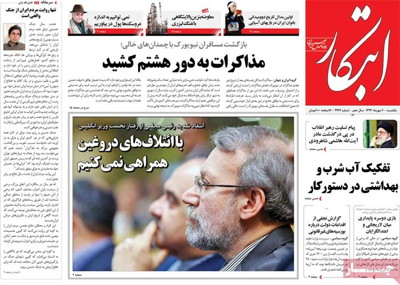 Etemad: “Scholarships of 1,600 students do not meet the required standards,” a report by the acting minister of science, research and technology revealed. 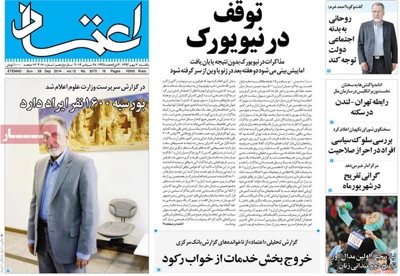 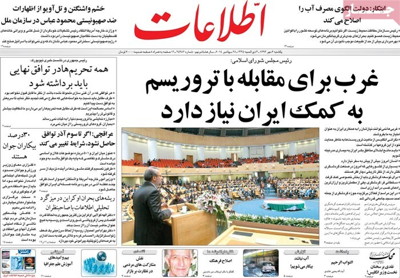 Farhikhtegan: “The government is responsible for keeping people’s hope alive,” President Rouhani said at a meeting with Iranian expatriate university professors and students in America. He further said that countering Iranophobia is incumbent on all Iranians within and beyond the country’s borders. 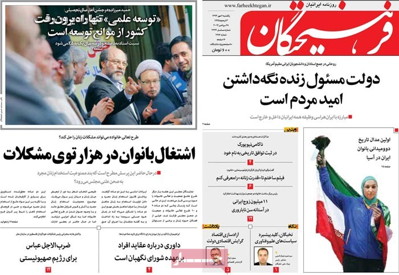 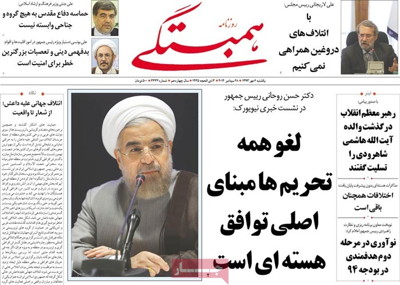 Javan: “Substantial and fundamental disagreements at the end of marathon New York talks” was the headline that the daily put on its front page after ten-day negotiations merely produced an agreement over technical details. Also, the daily quoted President Rouhani as saying, “[Uranium] enrichment in Iran and a total lifting of sanctions are the two conditions for a nuclear deal.”

Javan: “The domino effect of independence in Europe has been felt in Spain. Catalonia’s regional leader [Artur Mas] has scheduled an independence referendum for November 9.” 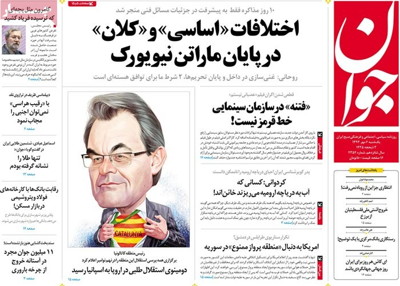 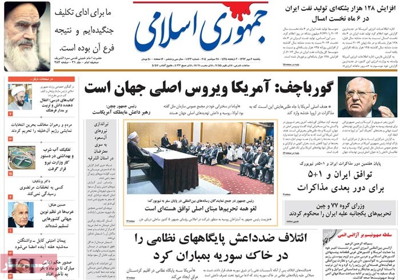 Kayhan: “No sanction has been lifted as far as oil industry is concerned,” said the director of the National Iranian Oil Company for international affairs. 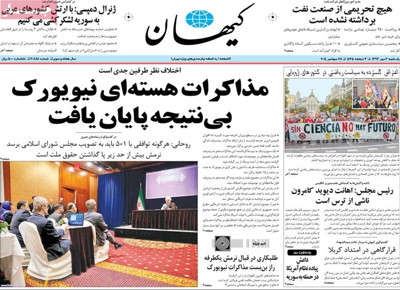 Nasl-e Farda: “Presidents Putin and Rouhani are to meet in Astrakhan.” 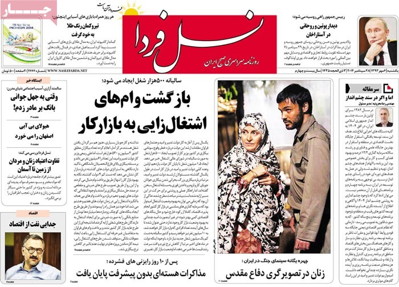 Roozan: Sadegh Zibakalam [a university professor] says he does not want to be sent to Evin Prison. “I am no hero; I am an ordinary citizen.” His comments came after he was sentenced, in a court of first instance, to 18 months in jail for “disturbing the public opinion” and “insulting the judiciary”. 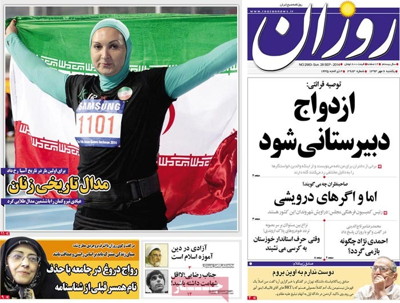 Shahrvand: “The flow of hazardous substances to Caspian waters has tainted the catch of commercial fishermen in northern Iran.” 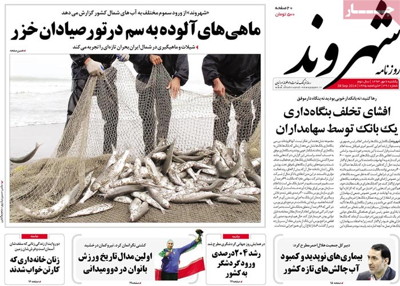 Sharq: “The Judiciary does not approve of filtering,” the deputy judiciary chief said on mobile applications mainly used for messaging and calling – Viber, WhatsApp and Tango. 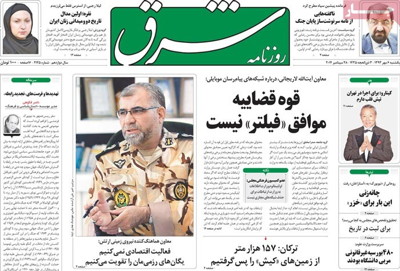 Tafahom: “All sanctions against Iran must be lifted,” President Rouhani said in an international press conference in New York. 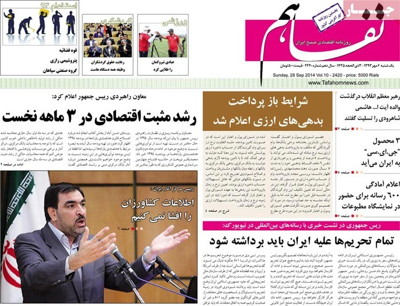