A look at Iranian newspaper front pages on Sept. 21

Two big stories dominated the front pages of Iranian dailies on September 21. A raft of instructions by the Supreme Leader, released in the form of general policies in the domain of science, research and technology, was what made headlines and shaped editorials on Sunday. Another major story revolved around shrinking water reserves in the capital Tehran. According to newspapers, a water crisis can be in the offing.

Afkar: “Iran has helped the Iraqi government to prevent Baghdad, Erbil and Amerli from falling to ISIL,” Deputy Foreign Minister Seyyed Abbas Araghchi told the United Nations Security Council on Sept. 19. He also voiced Iran’s readiness to offer assistance to Iraq and any other country threatened by ISIL terrorists. 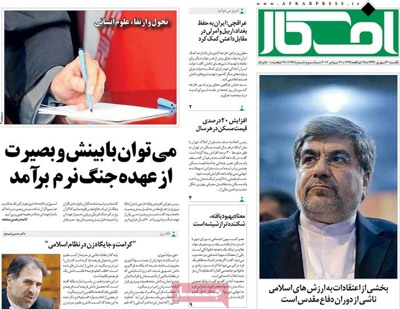 Aftab-e Yazd: “The budget allocated to research should rise to at least four percent of GDP,” the Supreme Leader has instructed officials. 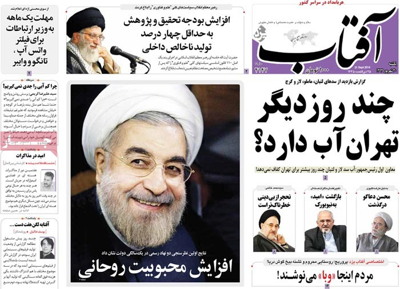 Arman-e Emrooz quoted former Foreign Ministry Spokesman Hamidreza Asefi as saying, “New York won’t be the last stop [for nuclear talks between Iran and P5+1].” In an interview with the daily, Asefi said he is of the opinion that both sides can settle some of their differences through dialog, but a comprehensive deal in New York is utterly inconceivable.

Arman-e Emrooz: Witha water crisis looming and Tehran’s main sources of water likely to last only for a few days, officials have appealed for nationwide prayers for rain. 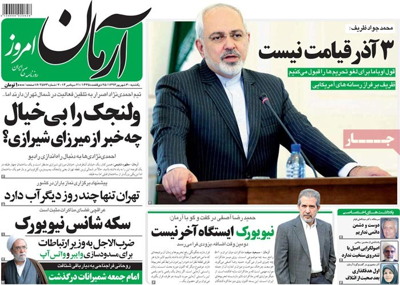 Asrar: “The number of hardliners in the 10th parliament will go down,”predicted Mostafa Kavakebian, a former reformist MP. 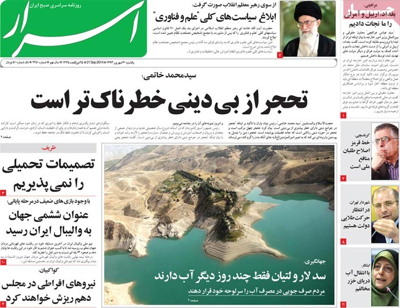 Ebtekar: “Obama’s new plan on the negotiating table,” is the headline of a report about the new initiative put forth by America to hammer out a solution to Iran’s nuclear dossier. The daily mainly dissects an analysis of the plan by The New York Times posted on September 19 under the title of “US hopes face-saving plan offers a path to a nuclear pact with Iran”. The plan says Iran should take away many of the pipes that connect its nuclear centrifuges and won’t have to reduce their number to 5,000 over the next 20 years as it was previously called for by America. The new initiative could pave the way for the two sides to meet halfway.

Ebtekar: “President Rouhani is popular with 60 percent of the Iranians,” is a report which refers to the results of two opinion polls, indicating that the president’s approval rating has reached a one-year high. Among other things, easing political tensions, steering the nuclear talks, holding a phone conversation with US president Barack Obama, offering free food packages to the public, taking numerous measures on the health front, and above all, fostering an atmosphere of hope and liveliness in society have been his impressive accomplishments since he took office in 2013.

Ebtekar:Judiciary Spokesman Gholamhossein Mohseni Ejei in a letter to the minister of communications and information technology has given him one month to block some mobile applications mainly used for messaging and calling, including Tango, WhatsApp, and Viber. 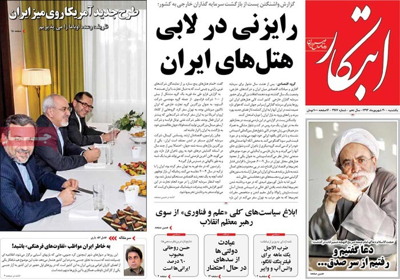 Etemad: “A haul of 6000-year-old antiques was seized in the north of Tehran.” 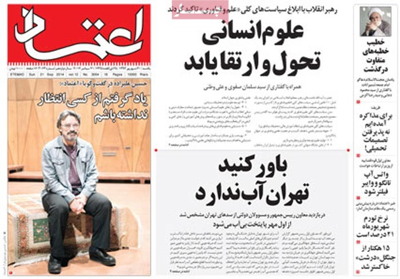 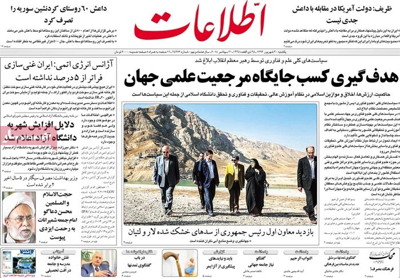 Hamshahri: “The Security Council has called on Iran to help with the fight against ISIL.” 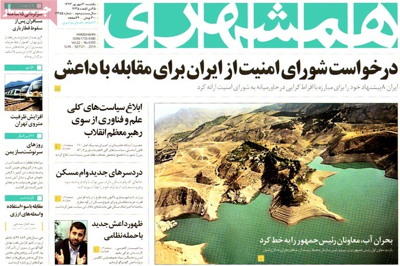 Iran: “Five awarded a medal of peace” is the headline that the daily put on its front page about the opening ceremony of the 2nd festival of “Art for Peace”. An Iranian vocalist, a calligrapher, a manager of a cultural center, an official with the Ministry of Culture and Islamic Guidance and the Iranian foreign minister were the recipients of the award. 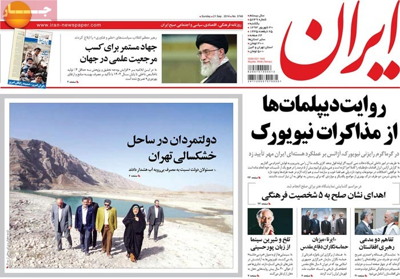 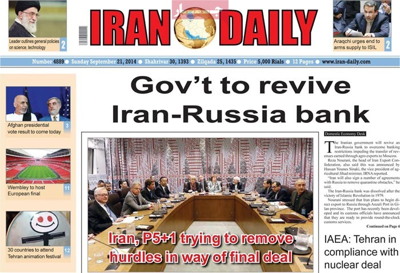 Jamejam: “The population crisis has yet to be taken seriously.” 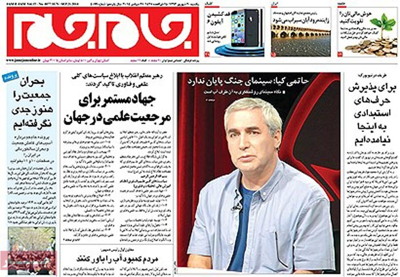 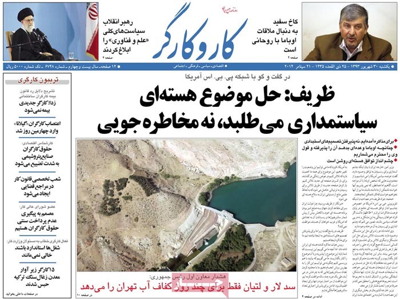 Kayhan: Iran should turn into a hub to register scientific articles and receive research papers from foreign elite and innovators, particularly from around the world of Islam, part of the Supreme Leader’s scientific and technological policy guidelines read. 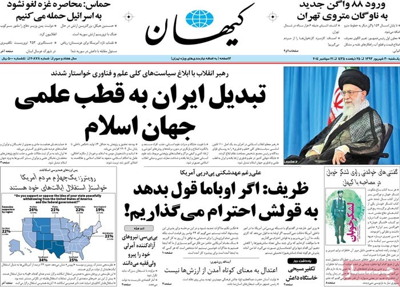 Nasl-e Farda: “The country’s largest gasoline-producing facility is to open in Isfahan,” said the deputy oil minister. Following the production of catalysts in Iran, the countdown is on to having the plant operational, he added. 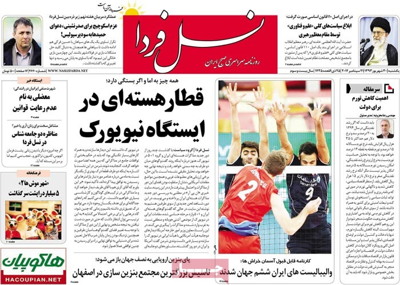 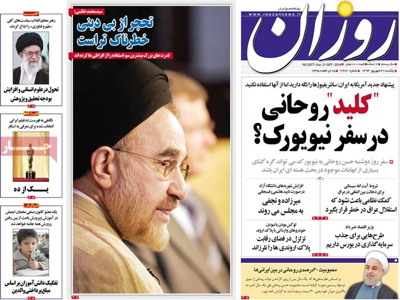 Shahrvand: “The country is grappling with an environmental crisis,” said the chairman of the Healthcare and Environment Commission of Tehran’s City Council. 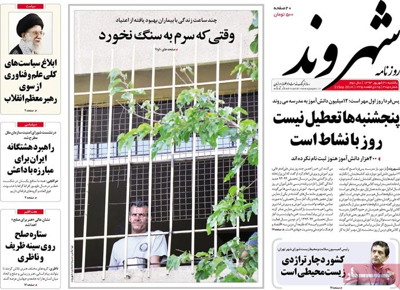 Sharq: “Infection prompts the closure of a coronary surgical ward at a Tehran hospital.” 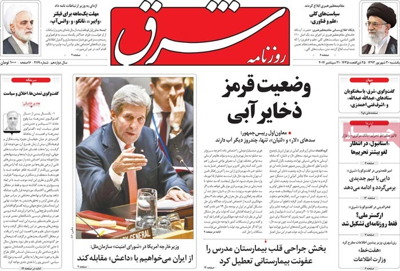 Siasat-e Rooz: Theeditorial of the daily states that US pledges cannot be trusted. 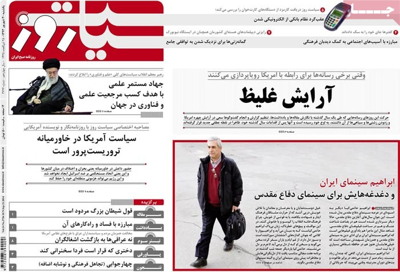 Tafahom: In keeping with Article 110 of the Constitution [which defines the leader’s duties and powers], Supreme Leader Ayatollah Ali Khamenei has outlined the science and technology macro-policies after consultation with the State Expediency Council. The policies communicated to the heads of the three branches of the government and the chairman of the Expediency Council come in six chapters and 32 points.

Tafahom: August of 2014 has shattered records for the hottest August since recording of global temperatures began in 1880.

Tafahom: “The water crisis sounds the death knell for dams of Latyan and Lar” is the news story that reports the comments of First Vice-President Eshaq Jahangiri. He warned that if the problem persists, authorities will have to turn off the tap on excessive water consumers and temporarily stop water supplies to some districts of the capital. He added water reserves behind the two dams are only sufficient for a few days. 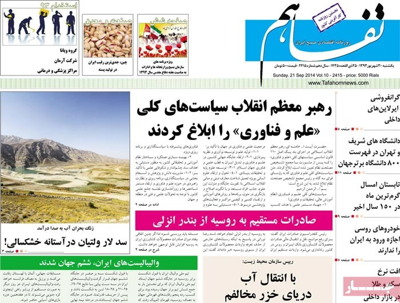 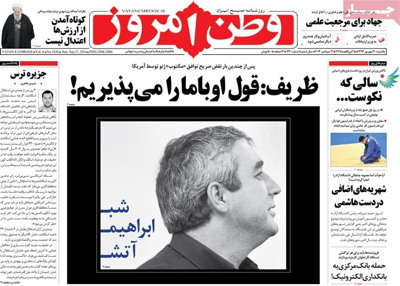