A look at Iranian newspaper front pages on Oct. 30

Failure of parliament to vote for President Hassan Rouhani’s proposed minister of science, research and technology dominated the front pages of Iranian newspapers on Thursday. Principlist papers rejoiced over the vote which dismayed moderate and reformist dailies on the other end of the political spectrum. News about an increase in tax revenues and improvement in business conditions also appeared on the front pages of newspapers.

Abrar: “The image of the suspected acid attacker released online is one of the leads police are following,” [Police Chief] Brigadier General Esmail Ahmadi Moghaddam said. 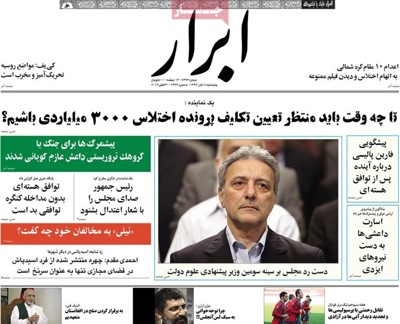 Aftab-e Yazd: Once again parliament failed to vote for the government’s proposed minister of science, research and technology. “People do not approve of intransigence,” the president tweeted afterward. 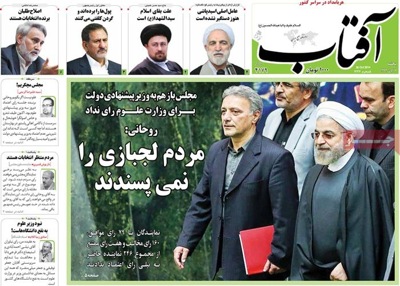 Arman-e Emrooz: “The public opinion will make a judgment,” Hassan Rouhani tweeted hours after the Iranian parliament refused to confirm his pick for the ministry of science. 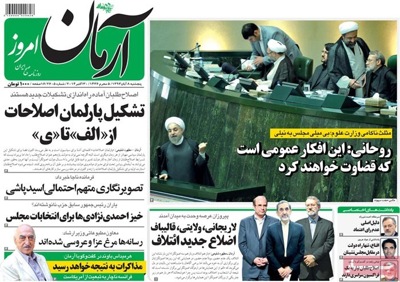 Asrar: “The director of the Atomic Energy Organization of Iran has reported progress in talks between Iran and the [UN nuclear] agency.”

Asrar: “In terms of brain drain, Iran is among the top three countries in the world,” said the deputy health minister for research and technology. 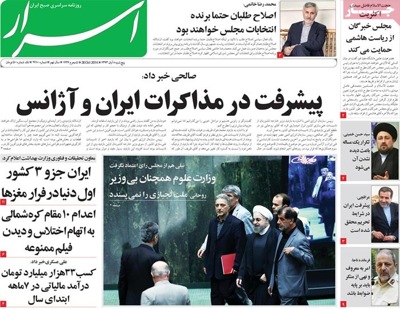 Ebtekar: “Police are following new leads in the case of acid attacks in Isfahan,” the police chief said. 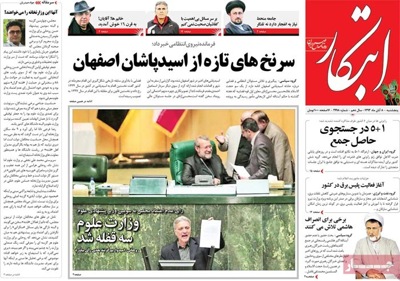 Eghtesad-e Pooya: “Tax revenues in the first seven months of the year amounted to almost $11 billion,” said the director of the State Tax Organization. 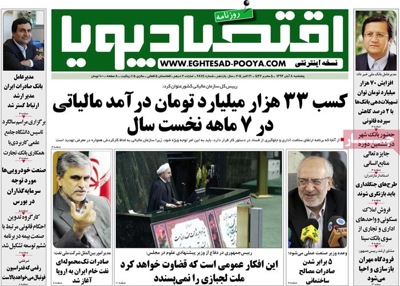 Emtiaz: “Enforcement of morality laws should be in line with rules and regulations,” said the police chief. 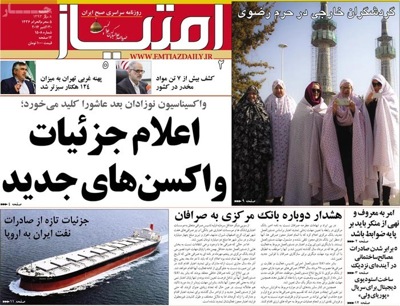 Etemad: “President Rouhani’s government has suffered an oil jolt; the country’s oil revenues are down by 30 percent.”

Etemad: “I’m sorry, but I respect the views of MPs,” the president said after parliament did not give a vote of confidence to his pick for the minister of science. 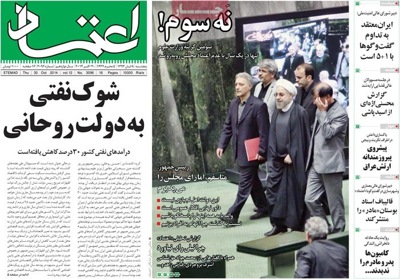 Ettela’at: The deputy health minister has criticized the lack of enough budget for medical research in the country. 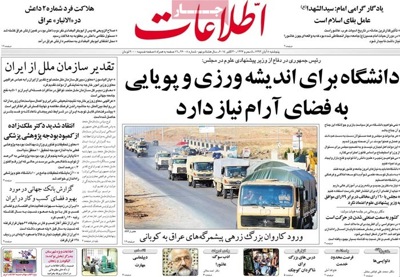 Hamshahri: With the launch of the Electricity Police, those who steal electricity will be arrested. 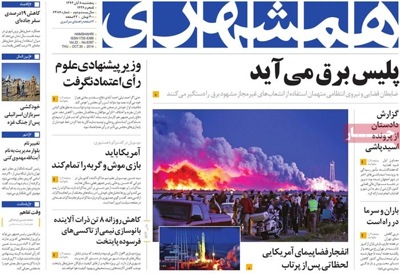 Hemayat: “Do not politicize human rights,” Iran’s Mohammad Javad Larijani has told the head of the UN Human Rights Council. 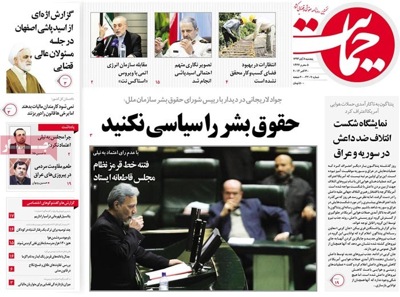 Iran: “We’re gonna miss Iran,” say European tourists who are on a train tour of Iran. 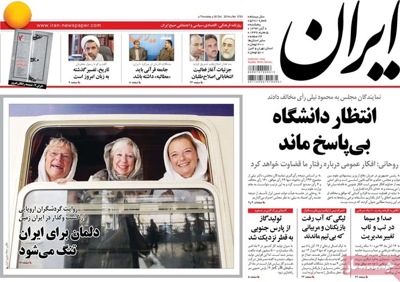 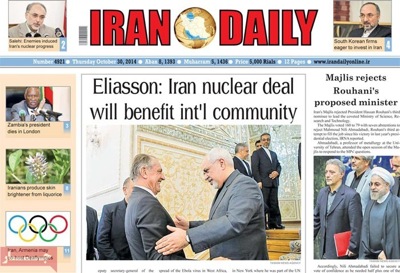 Javan: “Talks are deadlocked as a result of sanctions.” 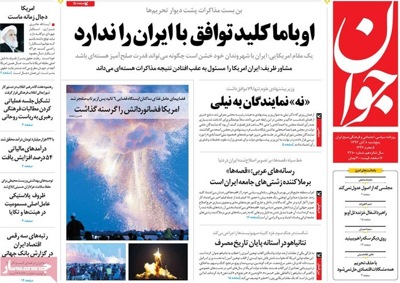 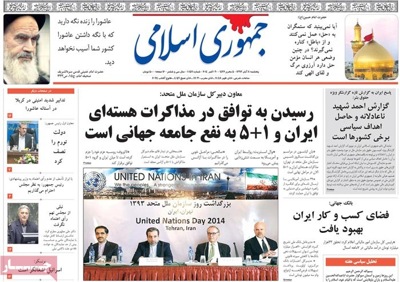 Kayhan: “Parliament insisted on protecting the rights of the people; the dream of radicals did not come true.” The daily said on its front page in reference to failure of MPs to vote for the president’s proposed minister of science, research and technology. 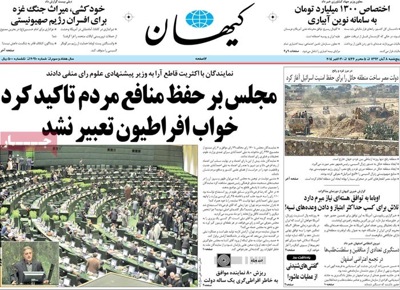 Roozan: Another MP has claimed that the Iranian nuclear negotiating team has crossed the red lines of the Islamic establishment. 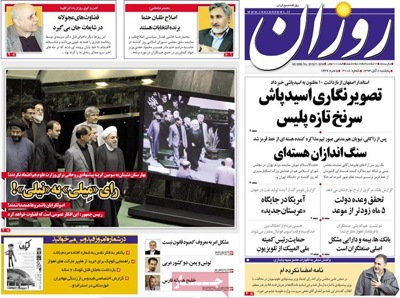 Shahrvand: “Iran has 87 names on the list of the world’s top scientists,” the deputy health minister said. 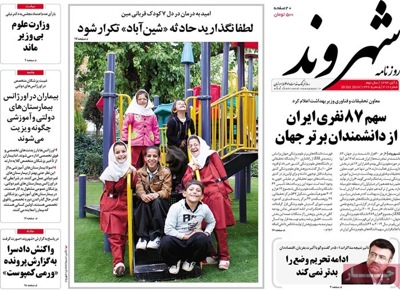 Sharq: “We seem to be in the habit of blaming media for anything [that goes wrong],” said Hossein Entezami, the deputy culture minister. 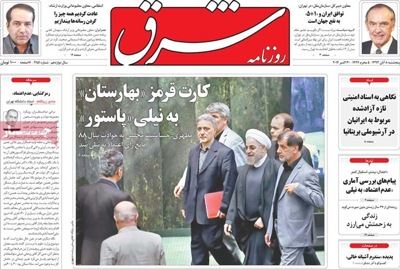 Vatan-e Emrooz: “General [Ghasem] Soleimani is a source of pride for Kurds,” said the commander of Kurdish peshmerga fighters in Iraq. 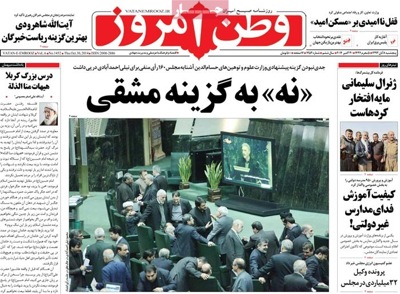