A look at Iranian newspaper front pages on Oct. 16

IFP has taken a look at the front pages of Iranian dailies on Thursday and picked headlines from 20 of them.

A rise in the amount of housing loans young couples in metropolises can take out dominated the front pages of the Iranian newspapers on Thursday. Hours-long meetings between representatives from Iran and the EU in Vienna were in the news too. Also drawing attention was the death sentence a Saudi court has handed down against a Shiite cleric for what is described as sedition.

Abrar-e Eghtesadi: A top Iranian carmaker seeks partnership with a “non-Asian, non-European” company. That raises the likelihood of a joint venture involving an American company. 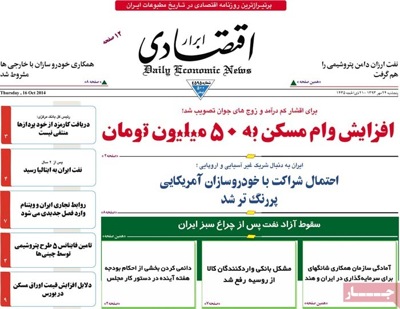 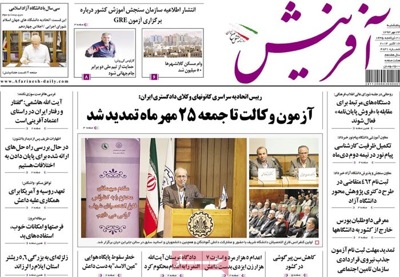 Afkar: “A nuclear deal is in the best interest of everyone,” the Iranian top MP told a news conference on the sidelines of the 131st Assembly of the Inter-Parliamentary Union in Geneva, Switzerland. 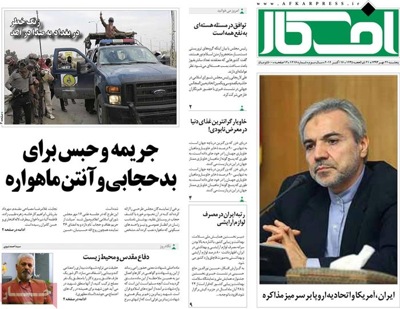 Aftab-e Yazd: A number of MPs have floated a motion that calls for fines and jail terms for individuals who access satellite channels. 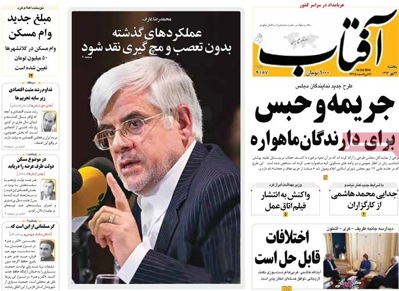 Arman-e Emrooz: Mohammad Hashemi [the brother of the chairman of the Expediency Council] said he decided to quit the Executives of Construction Party because of a lack of cohesion as far as thinking is concerned between him and new members of the party’s administrative committee. 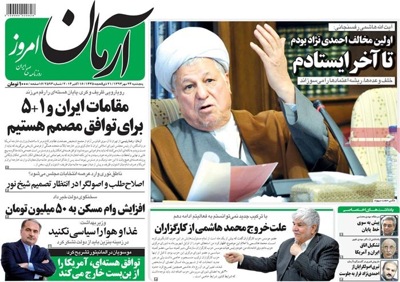 Asr-e Eghtesad: “Levying a transaction fee on debit-card readers is inevitable,” the governor of the Central Bank of Iran said. 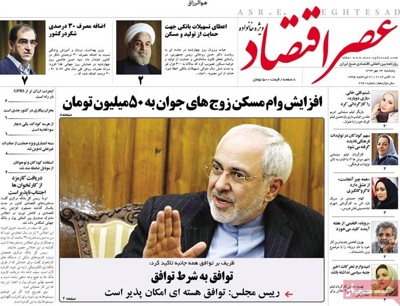 Asrar: “The performance of those who have served in the past should be analyzed without prejudice,” Mohammad Reza Aref, a former vice-president said.

Asrar: “The prospects of relations between Iran and the West are bright,” Ayatollah Akbar Hashemi Rafsanjani tells the Swiss envoy in Tehran. 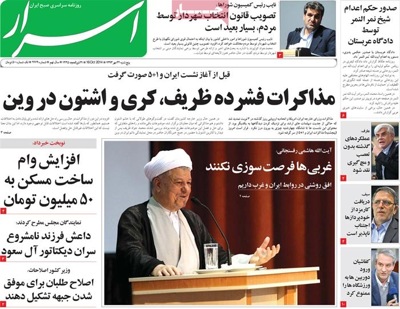 Ebtekar: Iran’s former OPEC envoy has blamed a new coalition between the US and Saudi Arabia to keep crude prices low and deal a blow to Iranian and Russian economies as the reason behind a recent drop in oil prices.

Ebtekar: “The West should not allow the opportunity [to strike a deal with Iran] to slip away,” Chairman of the Expediency Council Ayatollah Akbar Hashemi Rafsanjani told the Swiss ambassador to Tehran. 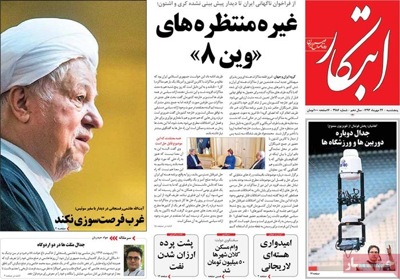 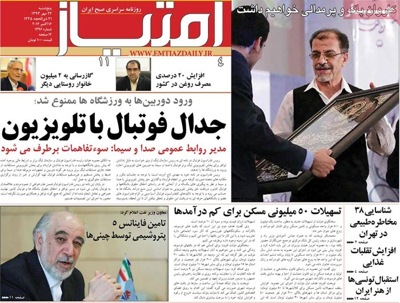 Ettela’at: The Iranian health minister has warned about an alarming rise in cooking oil and sugar consumption.

Ettela’at: “Considerable differences remain, but that does not mean they are not solvable,” Iranian Foreign Minister Mohammad Javad Zarif said after talks with EU’s Catherine Ashton. 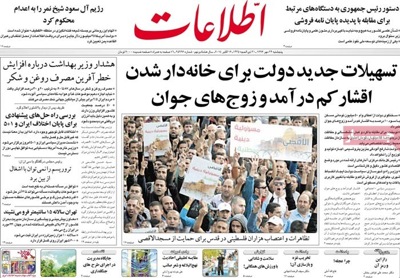 Farhikhtegan: The president has ordered [science ministry] officials to deal with those who sell dissertations. 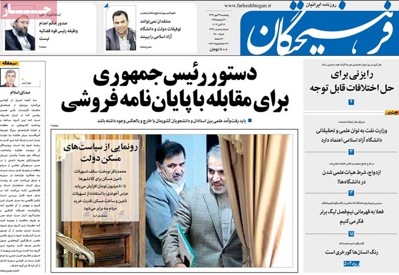 Hemayat: “The fuss over human rights is part of a war of words; the Judiciary will continue to act in accordance with laws,” the Iranian Judiciary chief said. 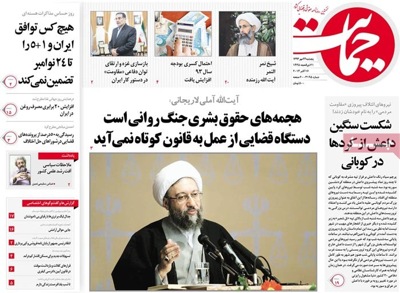 Iran: Iran and the West have signaled satisfaction with the trend of talks in Vienna. 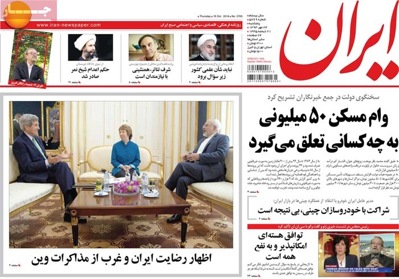 Jomhouri Islami: Although sanctions remain in place, an Italian firm has purchased Iranian crude for the first time in two years. 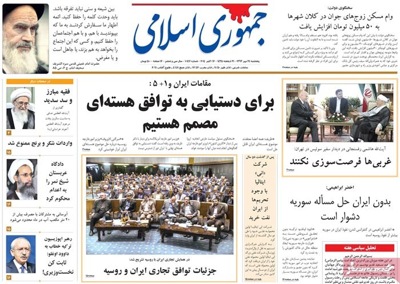 Kaenat: The IS terrorists have enslaved 7,000 Yazidi women and massacred 5,000 men in Sinjar. 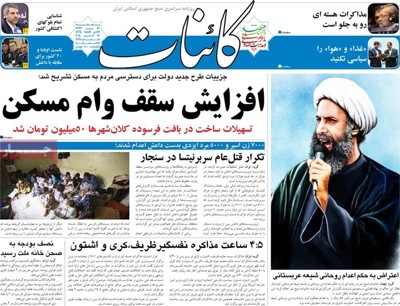 Kayhan: “IS suffered a blow in Kobani after locals put up fierce resistance against terrorists [in the Syrian border town].” 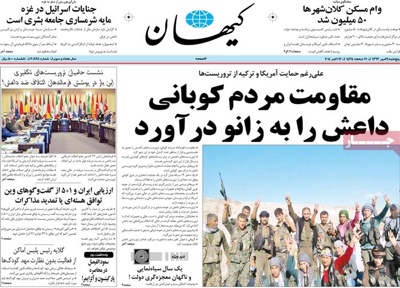 Mardomsalari: The International Court of Justice has rejected a lawsuit by Turkcell, Turkey’s top mobile operator, against Iran. 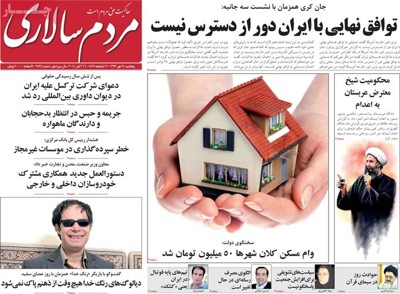 Resalat: “Reconstruction of Gaza and promotion of the defense capabilities of the [Palestinian] resistance are on the agenda,” the secretary of the Supreme National Security Council said. 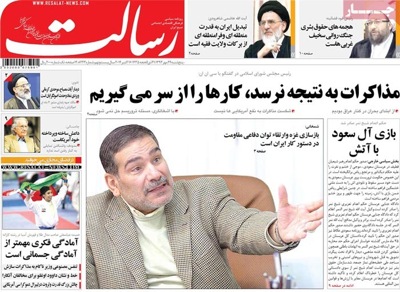 Roozan: Former First Vice-President Mohammad Reza Aref says he wishes to become the chancellor of the University of Tehran. 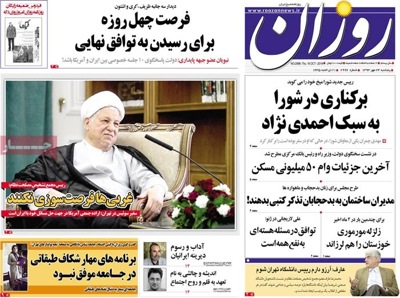 Sharq: An Iranian female fencer has bagged a silver medal in the Asian under-23 Fencing Championships in the Philippines. 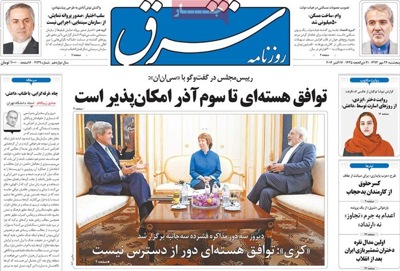