A look at Iranian newspaper front pages on Dec. 16

IFP has taken a look at the front pages of newspapers on Tuesday and picked headlines from 27 of them. IFP has simply translated the headlines and does not vouch for their accuracy.

Monday’s deadly hostage taking in a café in Sydney, Australia appeared on the front pages of most Iranian dailies on Tuesday. Also on the front pages were the comments of President Rouhani that sanctions will be lifted and those of Ali Akbar Velayati, the Supreme Leader’s advisor, that Tehran’s missile capability is not negotiable as well as the call by one-time parliament Speaker Ali Akbar Nategh Nouri for the formation of political parties to smooth the day-to-day administration of affairs in the country.

Abrar: The minister of science, research and technology has explained why some speeches planned for University Student Day were called off. “Some of the speeches had not been given the go-ahead in the first place.” 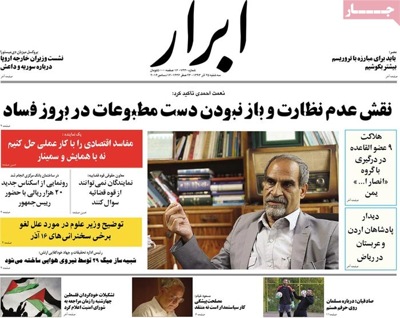 Abrar-e Eghtesadi: The price of the standard gold coin in Iran has hit the 10 million rial [around $300] mark. 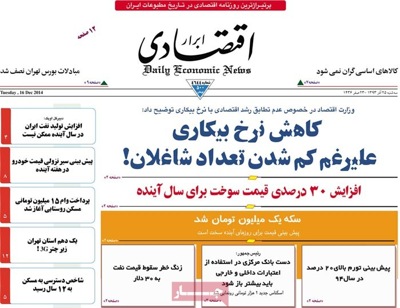 Afkar: “We have full trust in our nuclear negotiators,” said President Hassan Rouhani. 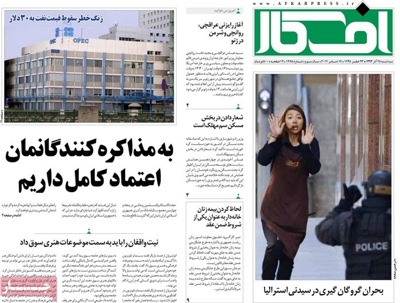 Aftab-e Yazd: “The previous government printed forty-something percent of the entire bills the country has printed ever,” said President Rouhani.

Aftab-e Yazd: Some 11 million young men and women across Iran are of marriage age. 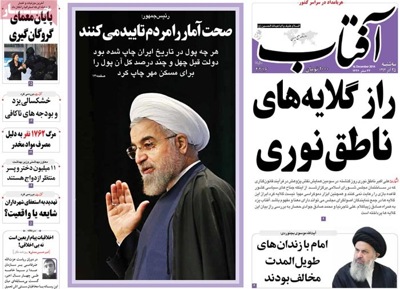 Arman-e Emrooz: “Some urge us to conclude a deal fast; others want us to quit the talks altogether,” the president has said of efforts to prevent nuclear talks to produce results. 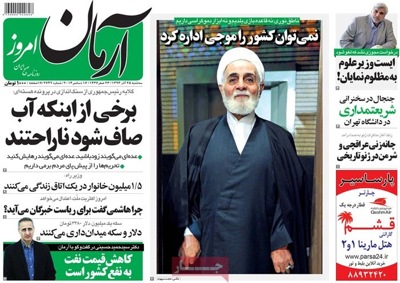 Asrar: “Wisdom requires us to thrive politically as we interact with the rest of the world,” said Chairman of the Expediency Council Akbar Hashemi Rafsanjani. 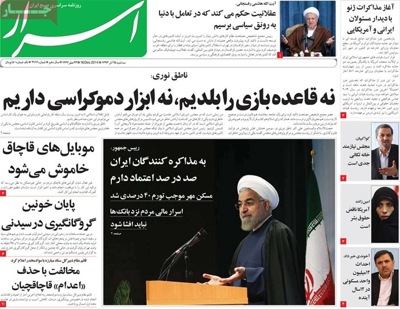 Eghtesad-e Pooya: The president has blamed the 40 percent inflation rate [his government inherited from the previous government] on Mehr Housing Project his predecessor launched. Emtiaz: “As many as 220 thousand illegal abortions are conducted [across the country] annually,” said a deputy health minister.

Emtiaz: “Prices of energy forms are likely to rise by 30 percent next year,” said a member of parliament’s Budget Committee. 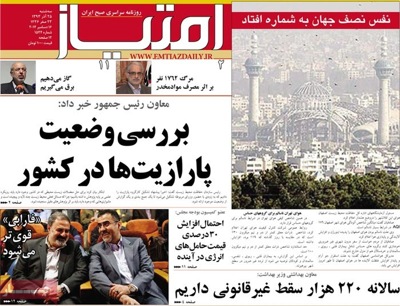 Etemad: “We will bring down the sanctions [barrier],” President Rouhani told a host of banking managers as he urged banks to roll up their sleeves to enter the investment market. 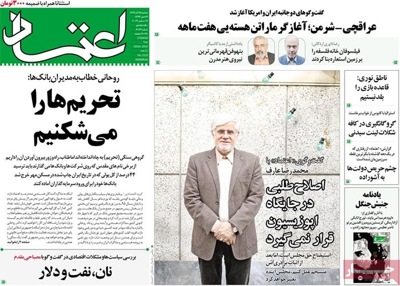 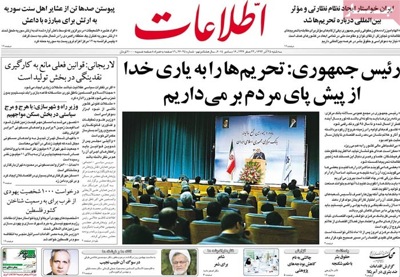 Hambastegi: “Less reliance on oil in the budget bill is imperative,” said Ali Akbar Velayati, an advisor for international affairs to the Supreme Leader.

Hambastegi: “We do not know the rules of the game, nor do we have the tools of democracy at our disposal,” Ali Akbar Nategh Nouri told a national conference on the role of research in lawmaking. 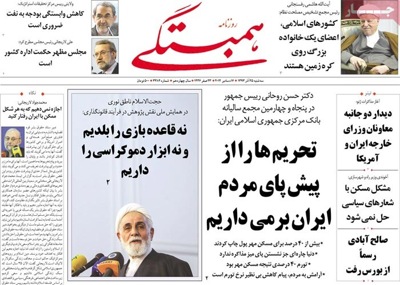 Hemayat: “Western sanctions against Iran are against [principles of] human rights and amount to international crimes,” said the secretary of the Iranian Judiciary’s Human Rights Commission. Iran: In the first eight months of the year 1,762 people have died of addiction to illicit drugs [across Iran]. 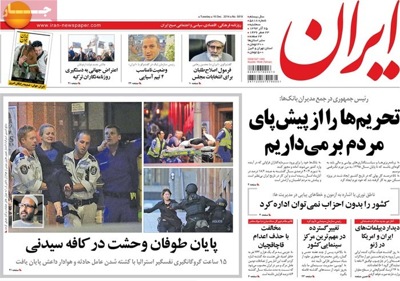 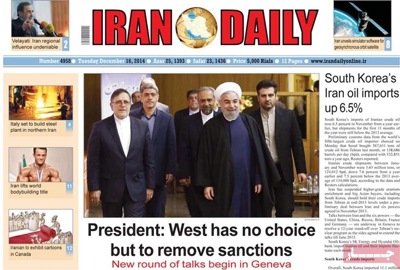 Javan: Parliament’s Research Center has announced that next year’s budget would entail more than $10 billion in deficit if it is based on oil prices of $70 a barrel. 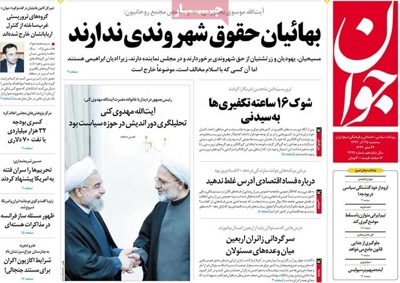 Kaenat: “Inflation rate should land in single-digit territory,” the president told a number of banking managers. 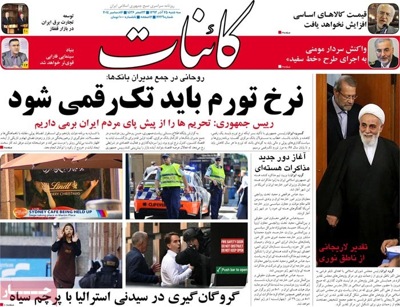 Kasb va Kar: “Those who fish in the troubled waters of sanctions are worried about the prospects of their termination,” President Rouhani said. 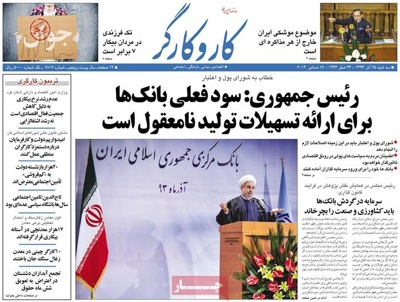 Kayhan: “Economic sanctions were what top seditionists [those who disputed the results of the 2009 presidential elections and sparked unrest] asked the US for,” said Managing Editor of Kayhan Hossein Shariatmadri in a speech at the University of Tehran. 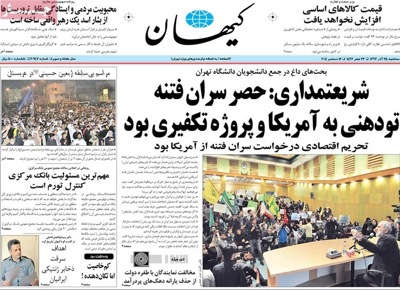 Mardomsalari: The Iranian Drug Commission has said it is opposed to abolition of the death penalty in cases involving drug traffickers. 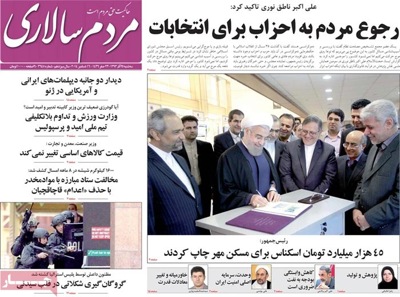 Roozan: “Reports that Iran made concessions to have the talks extended are false,” said Ali Akbar Velayati, an advisor to the Supreme Leader.

Roozan: A staunch supporter of the Mashaei-Ahmadinejad camp has denied that the former president’s chief of staff has distanced himself from his boss. [It came after Mashaei was reported as saying that he was distancing himself from Ahmadinejad so that he could win back the support of his advocates.] 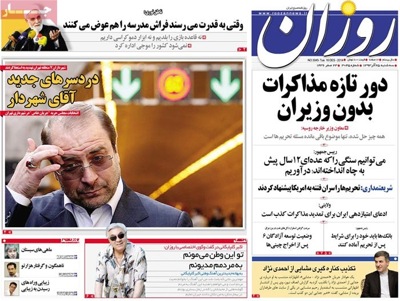 Sepid: “Doctors used to receive as much as $3 billion in unreported [illegal] fees from patients annually,” said the Iranian health minister. 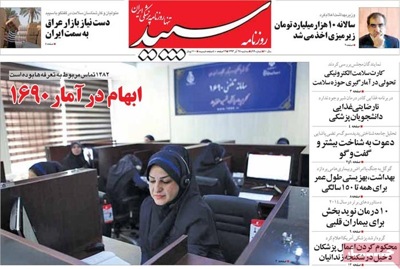 Shahrvand: The head office of South Pars Company [in Asaluyeh] was engulfed in flames.

Shahrvand: The life of Iranian asylum-seekers at detention camps on Manus Island [in northern Papua New Guinea] is hellacious. 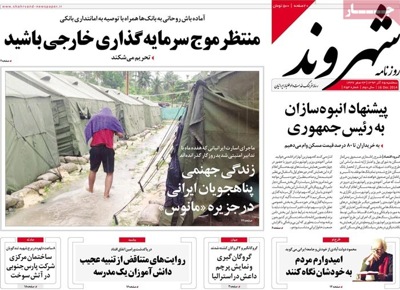 Sharq: “We don’t have the tools of democracy at our disposal,” said Ali Akbar Nategh-Nouri, a former parliament speaker as he supported the formation of parties. 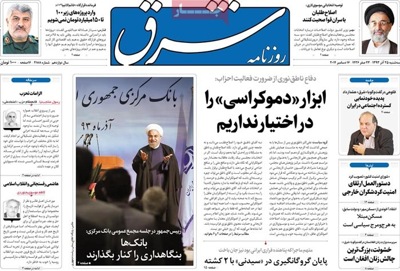 SMT: “Under the proposed budget some 50 percent of the costs of research conducted by the private sector would be reimbursed,” said the minister of industries, mines and trade. 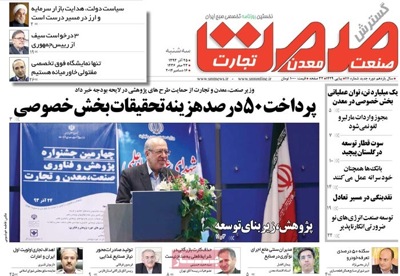 Tafahom: “Khatam al-Anbia Base [the development arm of the Islamic Revolution Guard Corps] has completed more than 2,000 projects so far,” said the commander of the base Brigadier General Abdollahi. 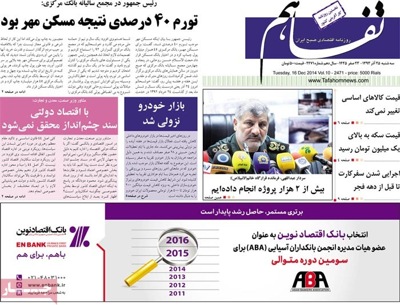 Vatan-e Emrooz: The chairman of parliament’s Article 90 Committee has said American tobacco company Philip Morris International is owned by the Zionists. Still, there is insistence [on the part of government] on importing Marlboro cigarettes.