‘It’s a Lie that Nuclear Deal Averted Threat of War’ 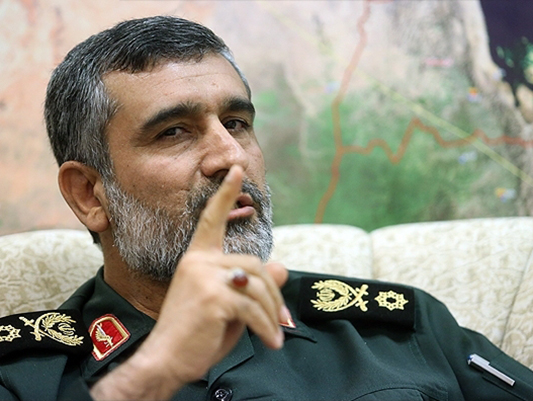 A top Iranian commander says it was not the nuclear deal between Iran and world powers that pushed the threat of war away from the country.

The claim that the nuclear deal signed between Iran and six world powers known as the Joint Comprehensive Plan of Action (JCPOA) has banished the specter of war from the Iranian nation is simply a lie, said a top commander of Iran’s Islamic Revolution Guards Corps (IRGC), according to a Farsi report by Basij Press.

“If we look to the West, then we must hold the begging bowl” and leave the country’s destiny in the hands of Democrats and Republicans, said Brigadier General Amirali Hajizadeh, the commander of the IRGC’s Aerospace Force.

“Some of our officials say if Iran does not reach agreement with the West, a war may break out. They would inculcate this idea into authorities before the JCPOA [was signed.] And after that, some officials said the JCPOA pushed the specter of war away from the [Iranian] nation. Unfortunately, some individuals inside the country unknowingly repeat the statement. This is a lie. It’s an insult,” said the top general.

“If the JCPOA is strong enough, it will protect itself. It needn’t avert a war. This is an insult to martyrs and the Armed Forces and the army and the IRGC. What we regard as security is related to our defence progress. We don’t reject political interaction, but we shouldn’t mislead people, either,” he noted.

“After the war [imposed on Iran by Iraq in the 1980s], we made a lot of efforts and produced weapons. Our researchers worked in a scientific atmosphere. Now they’re saying it was the JCPOA that kept the specter of war at bay! This is a wrong statement. Let’s not mislead anyone,” the senior commander underlined.

“I’m telling you, solving economic problems and [promoting] production and [creating] jobs in the country is thousands of times easier than [solving] complicated military issues,” he said.

The high-ranking IRGC commander stressed that “we should get to know the enemy.”

“We should get to know the US. In the Kuwait war, the United States didn’t dare get into war alone. The US took dozens of countries on board,” the commander said.

“The US goes to war against a country which is either disarmed like Libya, or which Washington is sure wouldn’t respond to its attacks,” he added.

“If they believed there was even a slight chance that Syria would respond, they wouldn’t have attacked,” the top general said.

He then said the US sometimes flexes its muscles to scare others. General Hajizadeh touched upon Washington’s “Mother of All Bombs,” and added, “We have bombs in our defence industries, too.”

“Americans have learned this method from Ottoman [rulers], and now they are rattling sabers to frighten a few. [Their threats were like] cannons which only made noise, but couldn’t destroy anything,” he further said.

“Another method is that they announce our warships have gone to such and such places, but after some time you hear that those vessels have returned. If there is a slight chance that the warships will be attacked, Washington will never do such a thing (dispatch the warships),” he said.

He underlined that Iran will firmly respond to threats.

“We will not accept defeat from anybody. US bases are all around us, and this is a threat,” he said.

He then noted that the US presence in the region comes at a cost.

The commander further said Iranian authorities in the non-military sector should be brave as well if they are going to succeed.

“Otherwise, we will be more and more ashamed every day.”

“If we have a revolutionary spirit, we can turn threats into opportunities,” said the general.

He noted if Iran looks to the West, then the country will have to retreat constantly and see its successes roll back one by one.