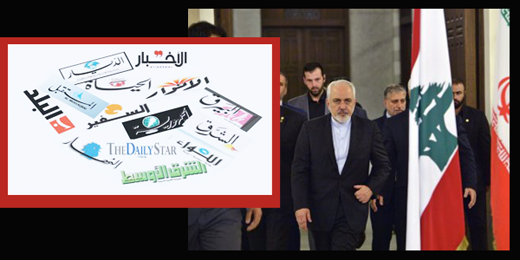 The Lebanese media have extensively covered a trip by FM Zarif to the country, saying all political groups have welcomed the messages of Iran’s top diplomat for regional states.

A trip by Foreign Minister Mohammad Javad Zarif to Lebanon – the first leg of his regional tour – in which he has called for regional cooperation and dialogue to solve the problems and defuse the crises have dominated the headlines in the Arab country with different Lebanese groups on the political landscape welcoming Zarif’s stances.

The Islamic Republic News Agency (IRNA) on August 12 published a report on the coverage in Lebanon of the Iranian top diplomat’s visit to the country and the messages he carried for regional countries. The following is the translation of the report:

As-Safir Newspaper wrote on Wednesday [August 12] that Zarif picked Lebanon to convey a message to Islamic nations in the Middle East and called, upon arrival, on these countries to answer Iran’s call for more cooperation and dialogue.

The daily further said that Zarif’s visit carried two other messages: rivalry for cooperation and construction, and Iran’s support for the Lebanese, adding that political sources at [opposing] March 8 and March 14 alliances described Zarif’s remarks in Beirut as serious, calm, respectful and responsible. They also likened Zarif’s message of stability in Lebanon to the case the Iranian FM made in an article As-Safir published ten days ago: First the neighbor, then the home.

The US delegation trip delayed

While in the presidential palace, Zarif said he was impressed by the stable security situation in Lebanon as compared with his previous trip (January 2014) and supported intra-Lebanese dialogue for an agreement to elect a president, An-Nahar, another Lebanese daily, wrote.

The daily further said that a Lebanon visit by a US delegation which has been under review for ten days has been put off after the Beirut visit of Iran’s top diplomat.

Al Liwaa wrote that the message Zarif’s remarks got across – especially the part in which he said time has come for rivalry for reconstruction in Lebanon – translates into support for all Lebanese sides and the need for restoration of calm in the country.

The daily then quoted sources in the Lebanese government as saying that part of positive talks between Zarif and Prime Minister Tammam Salam focused on the Iran nuclear deal and the need for tapping into the deal’s potential to support regional stability and solve Lebanon’s problems.

Al Binaa newspaper wrote that despite a busy schedule and a full itinerary, Zarif insisted on the inclusion of Lebanon in his regional tour, adding that his trip signaled the following message: despite regional and global developments, Iran’s presence in Lebanon would be overwhelming.

The daily went on to write that Zarif has underlined his country’s support for the Lebanese resistance and the need for maintaining the country’s stability and for a diplomatic solution to the Syrian crisis.