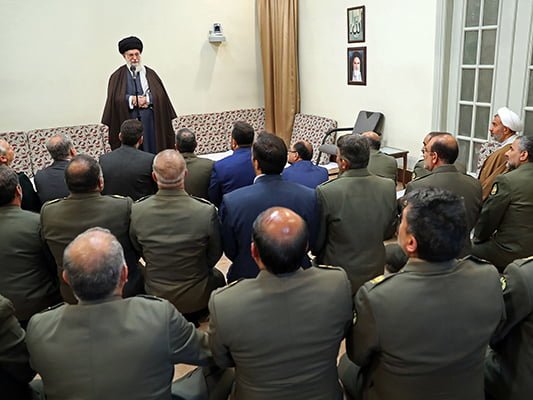 Ayatollah Khamenei also expressed hope for a bright future for the young generation of the army staff and underlined the urgency of continuous boosting of Iranian Army’s progress and might.

“The progress should keep going on so that tomorrow’s army becomes better, stronger and more efficient and revolutionary compared with today’s army,” he was quoted as saying.

He also directly addressed the young generations of the army’s staff and urged them to undertake new initiatives, make serious attempts and expand their capacities to further develop the army’s capabilities.

The Leader also hailed the Commander of Iran’s Army Major General Abdolrahim Mousavi for his recent revolutionary and unifying remarks in which he had said all Iranian armed forces will stand united in the face of enemies.

“Despite his emotional commitment to the Iranian Army which is critical for the survival of the military bloc, Major General Mousavi made wise remarks about the urgency of promoting unity between the armed forces which reveal his honesty and management wisdom,” he concluded.