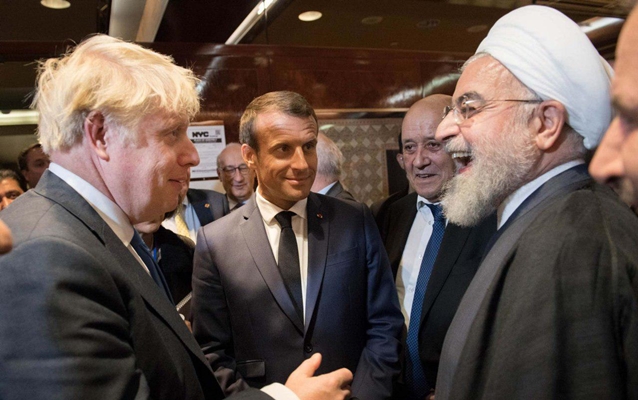 The Iranian president’s chief of staff Mahmoud Vaezi says President Hassan Rouhani’s laughter was the best response to the insistence of British and French leaders on arranging a meeting with US President Donald Trump.

Speaking in an exclusive interview with the Iranian Students’ News Agency (ISNA) on Sunday, Vaezi hailed the president’s move to scoff at the proposal by French President Emmanuel Macron and British Prime Minister Boris Johnson for talks between Rouhani and Trump.

He said the presence of President Rouhani at the UN revealed the failures of Washington’s arrogant policies aimed at politically isolating Iran, and “this was the most important achievement of this trip.”

“It was proven to the whole world that Iran cannot be sanctioned,” said Vaezi.

He noted that the US scenario was to keep Iran from attending he UN General Assembly meeting as the White House had sought to deny the Iranian delegation visas.

“If we hadn’t gone there, we would have completed their scenario. Quite the opposite, our strategy was to have a more active presence than previous years,” he said.

“We not only shattered the United States’ policies to isolate Iran, but also made the Iranian nation’s voice heard across the world,” he said.

Vaezi said a whole lot of meetings at the highest levels were held between Iran’s presidents and top officials and leaders from other countries.

“The United States’ scheme was to impose a self-made political and media sanction on us after its economic sanctions, but failed to,” he said.

“The US tried to level accusations over the Aramco incident in order to create the impression that Iran is the axis of tension in the Middle East region, but Iran announced from the UN podium its goodwill to end tensions in the region,” he said.

“Iran presenting the initiative of Hormuz peace, security dialogue and “No” to violence and war confirmed Iran’s peaceful positions on regional issues, and the announcement of that initiative proved that the Iranian delegation had come to world leaders with a plan and idea,” said Vaezi.

“The issue of the JCPOA as well as Iran’s possible talks with the US came up in all meetings, but all heads of state without any exception condemned the United States’ withdrawal from the JCPOA and its sanctions on Iran, and we reminded the European countries that they cannot expect the JCPOA to survive with only Iran paying the cost,” he said.

Vaezi also touched upon Washington’s accusations against Iran with regards to the Yemeni drone attacks on Saudi oil facilities.

“Those who accused Iran over the Aramco attacks neither had precise information about Yemenis’ military power, nor possessed any evidence suggesting Iran’s involvement in the attacks,” he said.

The president’s chief of staff then underscored that Iran is set to forge closer relations with all of its neighbours.

“We are even ready to condone the past mistakes of some countries,” he said.

“We want peace and security for all regional countries, and, of course, security in the Persian Gulf is ensured through its littoral states trying to maintain security there. So, when we have taken the Hormuz Peace Initiative which concerns regional security, that means we are ready to hold talks with all regional countries within the framework of that initiative,” he said.

Vaezi further touched upon the importance of Iran’s presence in the recent Eurasian Economic Union Summit in Armenia and the role that the union can have in boosting Iran’s economy.

“Eurasia is a regional-economic union and is comprised of countries each of which has considerable capabilities and potentialities for economic partnership with our country,” he said.

Vaezi noted the union is comprised of Russia, Armenia, Kyrgyzstan, Kazakhstan and Belarus.

“We (Iran) and several other countries such as Singapore, Moldova and Vietnam are cooperating with them,” he added.

He said Iran’s membership in the Eurasian union will be a good opportunity for Iranian businessmen.

“It is clear that at a time when we are under sanctions and [targeted by] economic terrorism and when the US is exerting pressure on Iran’s traditional trade partners, we should use active diplomacy to find new partners and different markets in order to offer our products,” he said.

The president’s chief of staff noted the presence of Iran in Eurasia’s summit was a sign to the US ruling elite making them realize that their sanctions have failed to isolate Iran economically and stop Tehran’s trade transactions with the rest of the world.

“They believed they can block international trade lifelines for Iran and force us into submission,” he said.

“But through diplomatic moves over the past months, we managed to open up new horizons on the economic front and did not allow them to achieve their objectives,” Vaezi said.

He said member states of the Eurasian union have a population of more than 180 million people combined, and the figure will further increase as countries such as Iran joins the bloc.

“An 180-million-strong market is an opportunity and a potentiality for any economy, including ours, and can definitely play a key role in enhancing our country’s trade relations,” he noted.

“We have also trade and economic relations with many key economic players in the world, and the US has failed to harm these relations despite its maximum pressure,” he added.

Vaezi also said that Eurasia, too, will benefit from having trade relations with Iran.

Elsewhere in his remarks, Vaezi made it clear that the enhancement of trade relations with other countries is not contradictory to the principle of economic resilience and reliance on domestic economy.

“One of the pillars of economic resilience is the expansion of the country’s exports,” he said.

“Membership in regional unions such as the Eurasian union is a rehearsal to increase the capability of our economy’s competition on the world stage,” he said.

The president’s chief of staff also touched upon other achievements of the President Rouhani’s trip to Armenia.

“Iran’s presence in this summit was an ideal opportunity for meetings and consultations with officials of other countries,” he said.