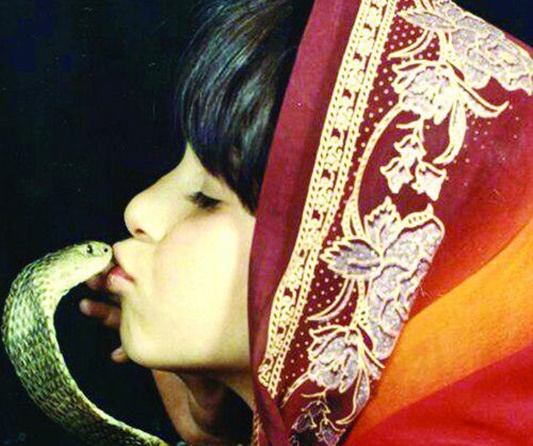 An Iranian woman named Faezeh Gholami says she has kissed the forked tongue of a snake for eleven times to set a record. The daredevil woman says she did this dangerous thing to become known as “Iran’s Queen of Snakes”.

The story goes back to fifteen years ago, when Faezeh was only seven. Her father read the story of a Chinese girl’s kiss on the head of a poisonous snake in a newspaper, and was encouraged to register Faezeh’s name in the Guinness Book of Records. Faezeh’s father also held the title of “Iran’s Sultan of Snakes” at that time. In fact, he took a brave decision and encouraged his seven-year-old kid to kiss the tongue of a Cobra; a dreadful creature that no antidotes have been discovered for its poison yet!

This was the beginning for a girl, who had become friend with the snakes since she was three, and finally at the age of seven she set a Guinness record.

Little Faezeh was accompanying her father from a city to another to display snakes to the people. When she was 11, the daredevil girl could play with different species of poisonous snakes along with her younger brother for 12 hours in a small aquarium without any problems. Many people assume snakes may become friends with their owners, but the reality is that snakes never can be tamed, and this little girl has experienced snake bites repeatedly.

In a Farsi interview with the Shahrvand newspaper, she has talked about her strange life and her amazing experience in dealing with snakes. “Iran’s Queen of Snakes” is now 20 and is studying psychology at Shahrekord University.

When did you start to feel comfortable with snakes?

Since the age of three, I began to know the snakes and communicate with them. However, after my record at the age of seven, I felt I could become more involved with this creature.

Weren’t you scared when you wanted to kiss the tip of a snake’s tongue for the first time?

At that time I was seven, so I was not afraid of the snakes, as I was curious about animals, especially snakes. My father’s teachings also helped me not to be afraid of the snakes. As far as I remember, I was very eager to set a Guinness record and show everyone what a Bakhtiari girl is like (Bakhtiari is an Iranian tribe).

Apart from that record, you’ve spent 12 hours with snakes. In that 12 hours, were you feeling any fear or something? 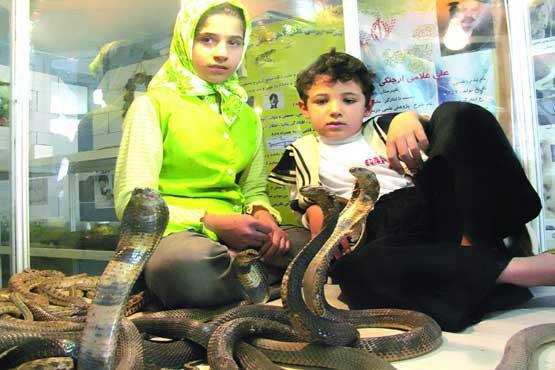 At the age of 11, along with my 6-year-old brother, we spent 12 hours in an aquarium with 30 poisonous snakes. My father is an experienced person. When we were at the aquarium he was there, and if something happened, he could help very soon. Of course, you should keep in mind that we had been trained for a long time, and as I was older than my brother, the space inside the aquarium was under my control. I was talking to my brother telling him about my first record, or about the nature and beauties of the snakes. In this way, I calmed him, and we played with snakes not to let them feel we are scared. Because in 50% of the cases snakes bite when they feel you are terrified.

Have you ever been bitten?

Yes. Snake are wild animals and cannot be tamed. Snakes get used to the situation, but they do not get friends with humans because they do not know a friend or foe. My father lost a finger because of the snake’s bite. He was also bitten by a viper once. Even a Cobra bit me when we were at a show in Mashhad city. Thank God and thanks to the experience of my father, who had antidotes, I survived. The worst injury I’ve ever suffered was a few years ago, when a Cobra bit my lip during a show, and I survived again. That was due to the inattention of one of the spectators. Before the show my father warned the spectators against using camera flashes, because the snake’s eyes are sensitive to the flash light. However, the audience did not take any notice of this and the flash lights caused the snake to bite me.

Are you ready to compete with anyone who breaks your record in kissing a snake?

I do not think anyone could break my record. If they could, they would have broken my record till now.