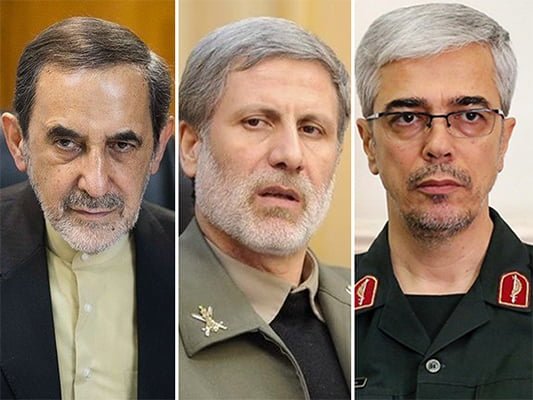 Condemnations continue to pour in from top Iranian authorities following the US-led airstrikes in Syria.

Major General Mohammad Baqeri, the chief of the General Staff of the Iranian Armed Forces, condemned the attacks in a phone conversation with Syrian Defense Minister Ali Abdullah Ayoub.

The top Iranian General said the military action on Syria emanates from the aggressors and their supporters’ anger over the defeat of terrorists.

“The nation and the armed forces of the Islamic Republic of Iran will continue to fight alongside the Syrian people and the Syrian armed forces against the criminal terrorists,” said General Baqeri.

Iran’s Defence Minister Brigadier General Amir Hatami also said in a phone conversation with the Syrian defence minister that the criminal military action against Syria by the US, France and Britain was a violation of international and human laws. The Iranian defence chief reiterated Tehran’s backing for Syria.

He said terrorists’ supporters, including some Western and regional governments, commit such crimes whenever they see that their plots have failed.

“At a time when UN inspectors have just arrived in Syria to look into the baseless claim by the enemies of the region and the oppressed Syrian nation that the Syrian government used chemical weapons, and they have not even begun their investigation, the move by the US, France and Britain amount to blatant encroachment upon the boundary of a legitimate government,” said Velayati.

He said such a move will beget negative consequences in the region and beyond.

“Such an unwise and criminal act against an oppressed nation and a government which has stood up to evil and terrorism is condemned,” said Velayati.

Earlier, other top Iranian officials had denounced the US-led military action on Syria.

Ayatollah Khamenei, the Leader of Iran’s Islamic Revolution, blasted the US-led coalition’s strikes on Syria as a crime, saying the American, British, and French leaders are criminals and will not benefit from the military strikes on Syria.

Ayatollah Khamenei said the three leaders had earlier committed similar crimes in Iraq, Syria and Afghanistan, but did not benefit from their actions, either.

Iranian President Hassan Rouhani said the US-led strikes on Syria are aimed at securing the West’s continued presence in the Middle East.

Without naming the US and its western allies, President Rouhani said certain states violate all international treaties by carrying out airstrikes on Syria under false pretexts.

In a phone conversation with his Syrian counterpart Walid Muallem, Zarif described the US-led coalition’s airstrikes in Syria as “illegitimate and criminal” and praised Syrians for their resistance against the enemies.

The Iranian Foreign Ministry had also released the earliest reaction, in which it warned about the repercussions of the attacks for the region and beyond.