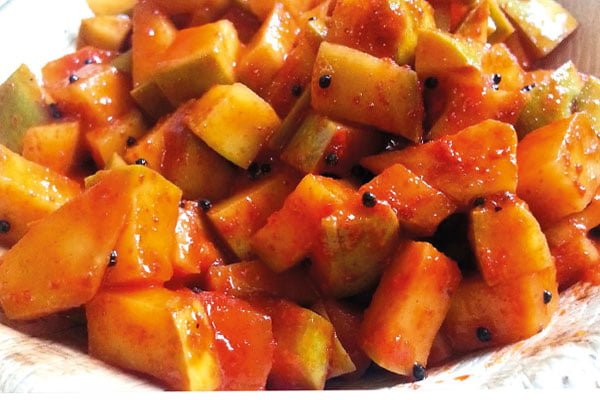 Mango is a sensuous, juicy, exotic fruit, and one of the most popular tropical ones in many countries, including Iran. The unripe fruit tastes tart and is used for producing pickles and sauces, among other foods.

The fruit is native to the Indian subcontinent, but it has now become one of the most widely cultivated fruits in the tropics.

It is said that mango seeds were transferred from India to Iran over 300 years ago.

Mango was well adapted to southern Iran, a warm and dry area where the climate is nearly tropical.

The fruit is now cultivated in considerable parts of the southern provinces of Iran.

Mango cultivation has been considered as one of the most desirable potentialities for development of rural areas in southern Iran.

Mango is harvested from March till the end of May.

The unripe fruit tastes tart and is used for producing pickles and sauces, among other foods.

The following are ISNA’s photos showing various stages of production of mango pickle in a factory in Iran’s southern province of Hormozgan: