Iran to Snap Back Nuclear Program If JCPOA Breached 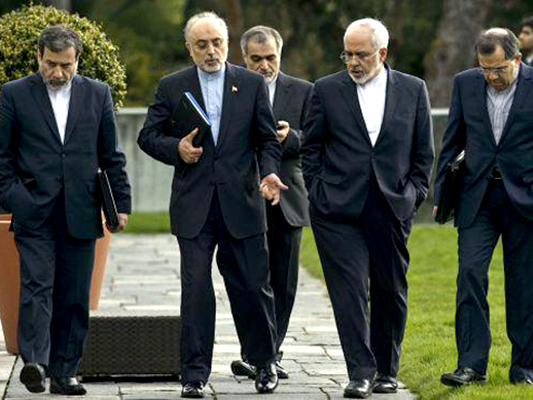 Iran says it has a clear scenario on how and when to return to its pre-JCPOA nuclear work if the other parties to the deal contravene the agreement.

Head of the Atomic Energy Organization of Iran Ali-Akbar Salehi and Iranian Deputy Foreign Minister Abbas Araqchi have separately expounded on Tehran’s plan to respond to Washington’s breach of, or possible withdrawal from the nuclear agreement signed between Iran and six world powers.

In an interview with the Persian-language Hamshahri daily, Salehi said Iran had the foresight to envisage the necessary measures during the nuclear talks capped by the JCPOA. He said Iran had planned the precautions required to roll back the agreement if the other sides reneged on their commitments.

“We have envisaged the necessary measures to go back, even beyond the points where we were in the past,” said Salehi.

He stressed that any violation of the deal will do Iran not harm.

“We hope the other side won’t make a mistake, but if somebody makes a mistake, we won’t be responsible,” he noted.

Iran’s nuclear chief then warned the West and the US against breaching the JCPOA.

“They shouldn’t try to test us. One of their ploys is to make us angry and provoke our feelings,” said Salehi.

He then touched upon a suggestion by some Iranian experts to pull out of the JCPOA in response to Washington’s breach of promises.

“Why should we tear up the JCPOA? It is the US that is simmering with rage! We are reaping the benefits of the deal. They are worried and upset. We should act wisely and not be overcome by emotions. Iranian officials have taken all considerations into account and will act in accordance with national interests and political wisdom.”

In the meantime, Araqchi told Iran’s state TV that Tehran will remain committed to the JCPOA as long as its interests are secured.

“We’re not dependent on the JCPOA, so it’s not that we’ll try to keep it at any price. We have said this both in local and foreign meetings. If we don’t benefit from the deal, we’ll pull out of it,” Araqchi stressed.

He further said the sanctions have jeopardized Iran’s interests, “but not the major interests.”

“Of course, this is my viewpoint. It is up to the supervisory board and senior officials to decide on whether or the sanctions have endangered our interests.”

The member of Iran’s nuclear negotiating team said Tehran has prepared its scenarios to respond to the US violation of the JCPOA are ready.

“Our reactions to any kind of action are ready. We’re not playing in the enemy’s field, nor will we hurt ourselves. We will respond with the tools we have in different places. Our reaction will not simply be limited to the JCPOA domain. Iran is a powerful country, has maintained and will maintain its elements of power. The United States’ passing laws to impose sanctions on Iran shows that Iran is a powerful country both in the region and in the international community.”

He then touched upon a recent meeting of the committee tasked with monitoring the implementation of the JCPOA as well as Washington’s breaches of promises in the committee’s statement.

“There was no consensus on whether or not Washington had violated the deal. We announced that we were not satisfied with the result of the committee’s work and that we would report the issue to Tehran. And now we’re waiting for the supervisory board’s decision.”

Araqchi then commented on the time that Tehran might return to its past nuclear activities if it is confirmed that the US or any other party to the JCPOA has violated the deal.

“The timeframe would be based on a plan the Parliament has wanted us to present in line with the ‘Proportionate Action’ legislation. The Atomic Energy Organization of Iran (AEOI) has clear plans on that, too. We have a clear scenario on when and how to return to our previous or even beyond our previous activities.”