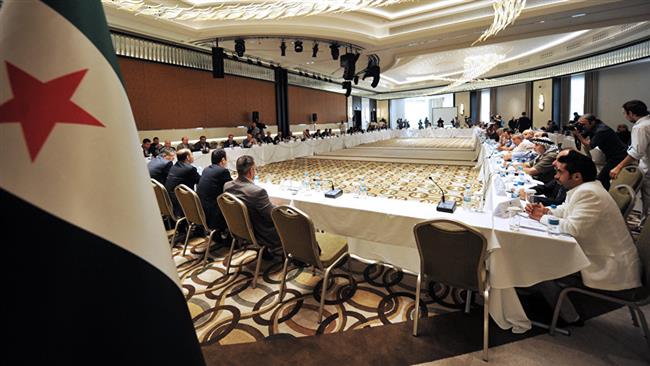 Iran says it strongly opposes Saudi Arabia’s efforts to send "terrorists in a new mask" to talks between the Syrian government and the opposition.

The kingdom brought together a number of militant groups in Riyadh Wednesday to decide whether to attend UN peace talks due in Geneva on Friday. They failed to reach a final decision, postponing it until Thursday.

Iran’s Deputy Foreign Minister Hossein Amir-Abdollahian said on Thursday Saudi Arabia is trying to raise its influence at the Geneva talks by including “terrorists” in the opposition lists.

“Terrorists with a new mask should not sit down at a negotiating table with the representatives of the Syrian authorities,” he told a news conference during a visit to Moscow.

“This is the most important condition,” Amir-Abdollahian said, calling on Saudi Arabia to stop stoking tension in the Middle East.

“We believe that Saudi Arabia’s insistence on including recognizable terrorists … in one list or another, is certainly not a constructive action on its part,” he added.

Amir-Abdollahian and his Russian counterpart Mikhail Bogdanov said after a meeting on Wednesday that the two countries shared a common view on the settlement of the regional crises.

Bogdanov serves as Russian President Vladimir Putin’s special envoy for the Middle East and Africa. Amir-Abdollahian arrived in Moscow on Wednesday for consultations with Russian officials on regional issues.