A look at Iranian newspaper front pages on Dec. 3

Snapshots of a visit by President Rouhani to the northeastern province of Golestan and his remarks that he would stay committed to his election promises were splashed across Iranian dailies on Wednesday. Another top story of the day covered the comments of Foreign Minister Mohammad Javad Zarif about nuclear talks and that a deal is in the offing.

Abrar-e Eghtesadi: “The spending package of next year [starting March 21, 2015] has been pieced together on the assumption that oil prices will hover around $70 per barrel.” 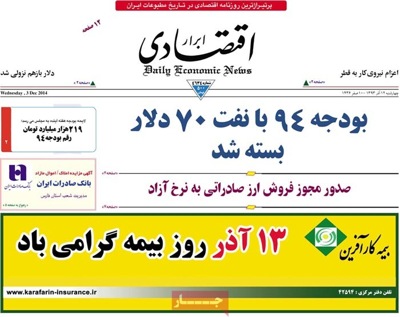 Afarinesh: “If the Supreme Leader wants me to help with the Saudi question, I will offer assistance,” said Chairman of the Expediency Council Akbar Hashemi Rafsanjani.

Afarinesh: “Some of our neighboring countries put a spoke in the wheel of nuclear talks,” said Foreign Minister Mohammad Javad Zarif. 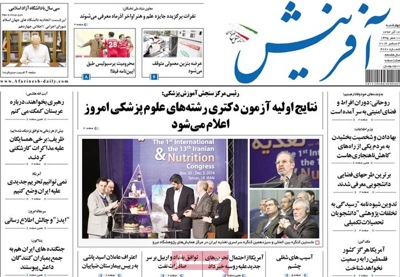 Afkar: “Iranian handicrafts have been introduced in the 19th International Crafts Selling Exhibition in Milan, Italy.” 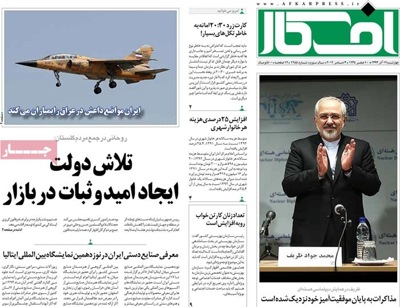 Arman-e Emrooz: “Gone are the days of going too far and creating a security atmosphere. If necessary, I would have introduced 50 ministers [a reference to his efforts to fill the vacant seat at the helm of the Ministry of Science. Only did his fifth pick secure the confirmation of parliament]. I will stay committed to my pledges,” said President Rouhani. 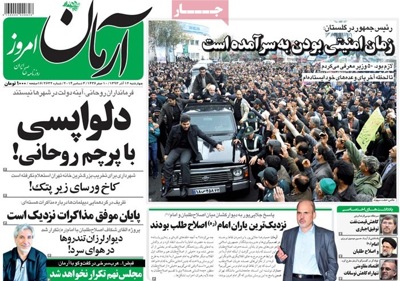 Asr-e Iranian: “The evidence that the International Atomic Energy Agency refers to is fabricated and unreal,” said the Atomic Energy Organization of Iran. 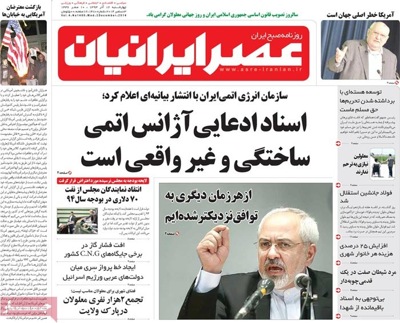 Asrar: “There is no point in cultivating a restrictive atmosphere,” said Seyyed Hassan Khomeini, the late Imam Khomeini’s grandson.

Asrar: “The individual behind an acid attack in Mashhad [a city in Khorasan Razavi Province] has been apprehended.”

Asrar: “The growth in the number of women who lead a single life is worrisome,” said the interior minister. 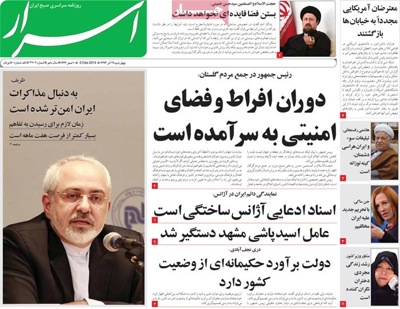 Ebtekar: “Nobody needs to be concerned, Iran’s nuclear structure will be maintained under [a future] deal,” said Foreign Minister Mohammad Javad Zarif. 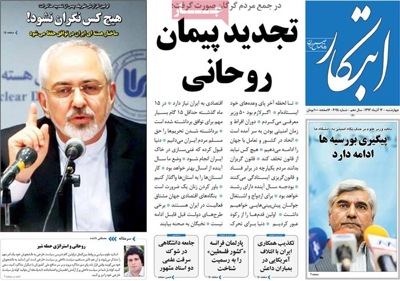 Eghtesad-e Pooya: “There has been a rise in the number of women who sleep rough and 2,000 street children have been identified,” said the director of the State Welfare Organization of Iran. 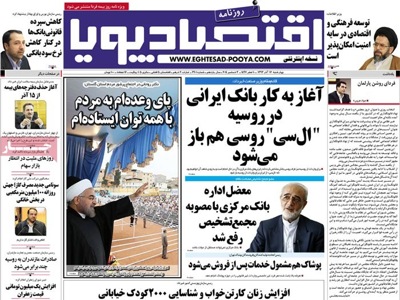 Etemad: “The reason why they [Karroubi, Mousavi and Rahnavard] were placed under house arrest had nothing to do withthe sedition [the unrest that erupted in the aftermath of presidential election in 2009]. Their house arrest came months after the vote because they were orchestrating fresh sedition,” said former Secretary of the Supreme National Security Council Saeed Jalili. 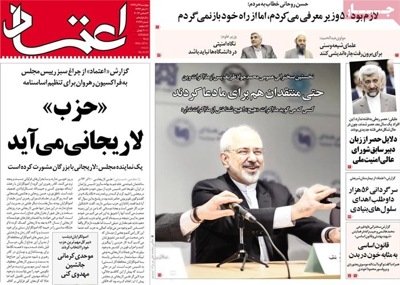 Ettela’at: “Cultural and economic development can take place only in the presence of security,” said the intelligence minister.

Ettela’at: “There will be a 17-percent pay rise for state employees in next year’s budget.” 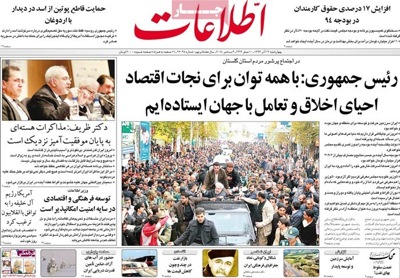 Forsat-e Emrooz: “The Bazargan border crossing in the northwest of Iran has been practically closed after Turkey failed to make good on its pledges.” 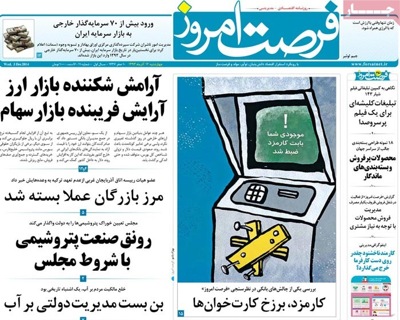 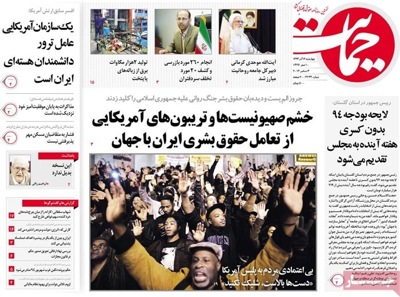 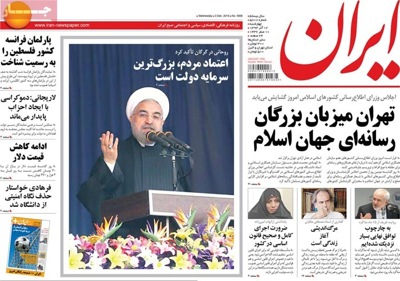 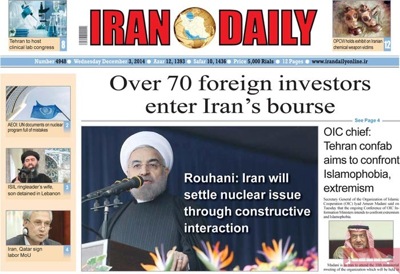 Jomhouri Islami: “We will deliver good news about drugs for refractory diseases in two weeks,” said the health minister. 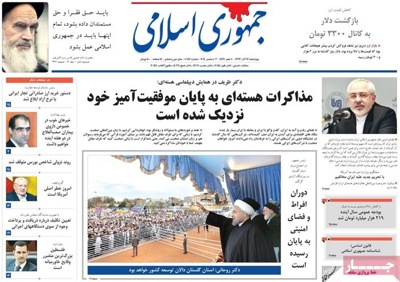 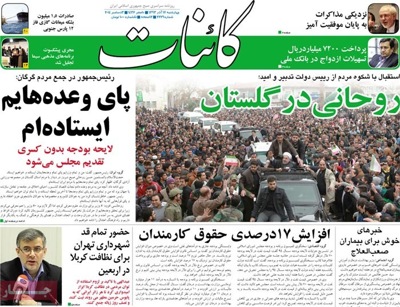 Kayhan: “American university students have joined the chorus of protests in tens of cities across America against police brutality after Michael Brown, an unarmed black teen, was shot dead by a white police officer in Ferguson, Missouri.” 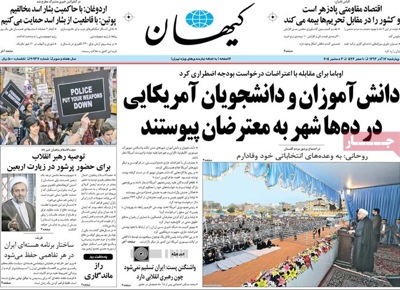 Khorasan: “The International Court of Arbitration dismissed a complaint that Turkey had filed against Iran in a natural-gas dispute.” 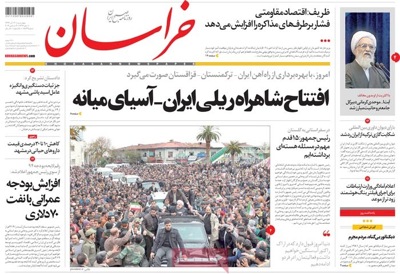 Roozan: “I have never approved of house arrest or jail term,” said Seyyed Mohammad Sadegh Kharrazi, a member of the newly-formed NEDA [Farsi initials for a Second Generation of Reformism] Party. 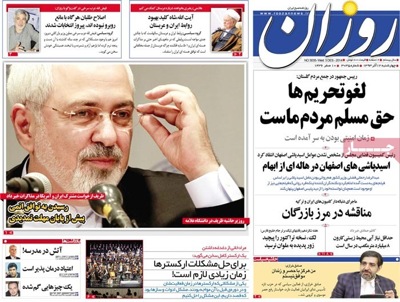 Shahrvand: “The first Charter ofUniversity Students’ Rights has been unveiled in the presence of the minister of science.” 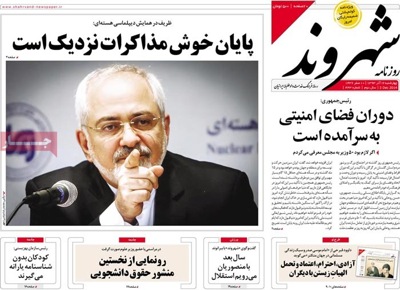 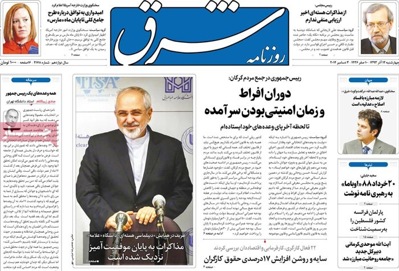