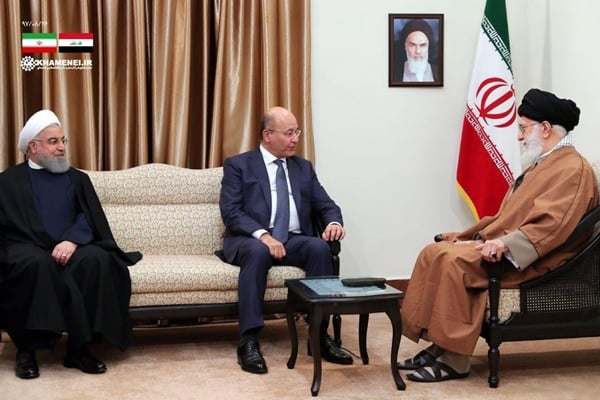 Leader of Iran’s Islamic Revolution Ayatollah Seyyed Ali Khamenei has called on all Iraqi groups and ethnic groups to preserve their national unity in a bid to foil the plots of ill-wishers.

The Leader said on Saturday that promotion of unity among all Iraqi groups is the only way to ward off ploys of the enemies.

Speaking in a meeting with Iraqi President Barham Salih, Ayatollah Khamenei warned that some regional and western countries try to undermine Iraq’s independence by meddling in the Arab country’s internal affairs.

He added that these countries also seek to disturb regional peace.

Referring to the vast capacity of the two countries to expand cooperation, the Leader added that “a strong, independent and advanced Iraq is very valuable to Iran, and we will be next to our Iraqi brothers.”

Elsewhere in his remarks, Ayatollah Khamenei called on Iranian officials to promote all-out cooperation with Iraq.

The Iraqi president, for his part, hailed Iran’s anti-terror efforts in his country. Salih said the Iraqis will never forget the Islamic Republic’s help in the fight against Takfiri terrorists.

“We seek to expand cooperation in all fields and promote it to a level that preserves the dignity of social and cultural relations and the common interests of the two nations,” noted Salih.

The Iraqi official also underlined that “we are going to turn Iraq into a strong country in the region, and we hope that we can benefit from the Islamic Republic’s capacities to rebuild Iraq.”