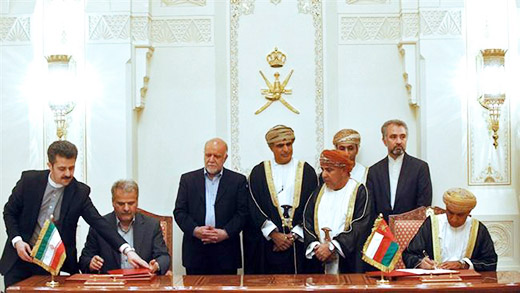 Two separate agreements have been signed for studies in the offshore and onshore sections.

Iran and Oman have signed an agreement on studying an undersea gas pipeline across the Persian Gulf in a project worth $60 billion, the managing director of the National Iranian Gas Exports Company (NIGEC) said.

The offshore deal was signed by the Iranian Offshore Engineering and Construction Company (IOEC) and Oman’s Oil Ministry. For the onshore section, an agreement was signed between the Pars Consulting Engineering Company and the Omani side.

The $60 billion deal was concluded during President Hassan Rouhani’s visit to Muscat in 2013 to ship 28 million cubic meters per day of Iranian gas to Oman for a period of 15 years.

The two countries signed another deal in 2007 to build a liquefied natural gas (LNG) plant in Oman to process the Iranian gas.

Oman has undertaken to pay the entire cost of the pipeline and the related infrastructure, according to Iran’s Oil Minister Bijan Namdar Zanganeh.

“Gas exports to Oman and entry into its retail market will make it possible to sell the Iranian natural gas to the region, especially Asian countries,” he has said.

“Currently, many countries have voiced readiness to invest in our upstream and downstream gas sector and are seriously pushing for imports of Iranian gas.

“Although we cannot ignore the European gas market, exports to Europe come later on the list of our priorities,” Kameli said.