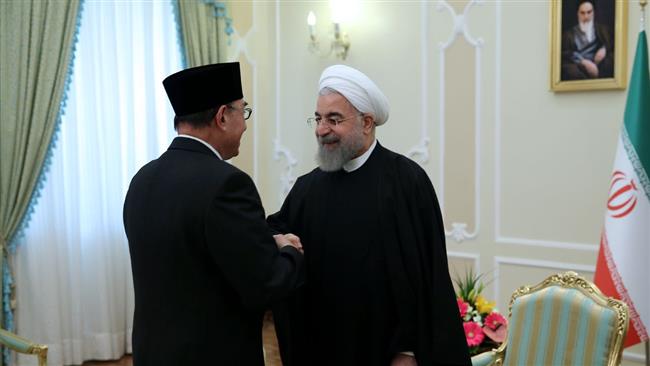 President Rouhani says Iran and Indonesia are two leading Islamic nations that have paid a huge price for their fight against extremism and terrorism.

At a Sunday meeting with the Indonesian president’s special envoy to the Middle East, Alwi Shihab, President Rouhani said that Tehran and Jakarta should play their role in countering the “grim phenomena of terrorism and violence” through promoting the “real and moderate” Islam.

Rouhani also hailed Indonesia’s position as the most populous Muslim state in the world which has friendly and brotherly relations with Iran, saying that the two countries could take advantage of their common cultural backgrounds to further expand relations.

He also said that Tehran seeks to broaden economic cooperation with Jakarta.

The Indonesian official, for his part, highlighted Iran’s inspirational role in fighting hegemony of the global powers, saying that the Indonesian people have always supported Iran’s Islamic Revolution. Shihab added that Jakarta is ready to boost mutual ties with Iran.

He also submitted to Rouhani a letter of invitation from Indonesian President Joko Widodo, calling on the Iranian president to take part in Grand 60th Commemoration of Asian-African Conference, which is scheduled to take place from April 19 to 24 in the two Indonesian cities of Bandung and Jakarta.