Iran Gov’t Urged to Pursue “Policy of Frowning” against US 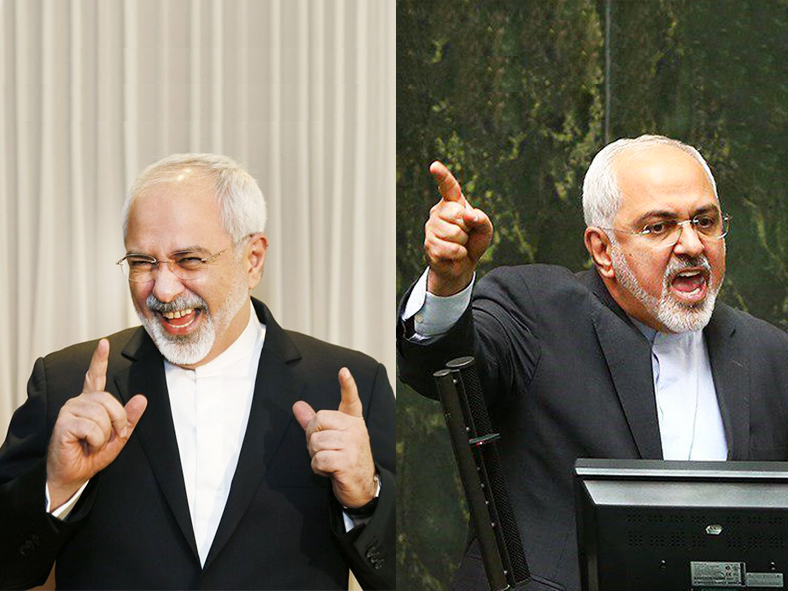 Iranian legislators have urged the Rouhani administration to pursue a “diplomacy of frowning” in dealing with the US.

Iranian parliamentarians believe Iran should continue its “diplomacy of smile” and seek to enhance its engagement with the world and pay due regard to the economic diplomacy, but should also adopt a “diplomacy of frowning” vis-à-vis the United States, reports ICANA.

Parliament representative Ali Vadaye’ says the parliament floor has turned into the hub of consultations on the 12th administration. He said MPs are holding intense talks with the proposed ministers in a bid to lay out an appropriate plan for the next four years.

Both advocates and critics of President Hassan Rouhani are present in the discussions.

Supporters of the Rouhani administration say the results of the 2017 Iranian presidential election, in fact, showed voters approved of Foreign Minister Mohammad Javad Zarif’s diplomatic moves and the diplomacy of smile.

On the other hand, the critics of the foreign policy of the Rouhani administration argue that other factors such as political sentiments also influenced people’s votes. They say if Iran smiles too much while facing the West, it will embolden hegemonic powers. Critics also believe the Iran nuclear deal has not had many benefits for Tehran.

In response to this criticism, supporters of Zarif say economic institutions are the ones responsible for reaping the benefits of the nuclear deal.

Irrespective of all the support for, or criticism of the eleventh administration’s foreign policy, Leader of the Islamic Revolution Ayatollah Seyyed Ali Khamenei has clearly and straightforwardly specified the path of diplomacy of the twelfth administration for the next four years. The Leader stressed the first priority should be “addressing people’s economic and livelihood problems” followed by “extensive interaction with the world” as the second priority.

Amid all dos and don’ts of the twelfth administration, reports on US President Donald Trump’s foreign policy suggest he has been ratcheting up the pressure and threats against the Rouhani administration. Now, at a time when the US president is trying to intensify the policy of Iranophobia while breaching the nuclear deal, Iranian MPs believe Tehran should adopt the “policy of frowning” in dealing with Washington.

Lawmaker Massoud Goodarzi says a key priority of the new administration, given the Leader’s remarks, should be to boost interaction with the world.

He said Iran should expand its relations with both neighbouring countries and non-neighbors.

“The European Union has a good atmosphere for interaction with Tehran,” he said.

Mohammad Javad Jamali Nobandegani, another lawmaker, said different programs should be pursued at the Iranian Foreign Ministry given the schemes orchestrated by Netanyahu, Trump and Bin Salman.

He noted that the enemies of Iran are seeking to isolate the country more than ever before, and leave no stone unturned to have the nuclear deal scuttled.

He also urged the new administration to do more to further increase engagement with world countries.

Domain of Iran’s Geopolitical Interests Should be Redefined

Legislator Morteza Saffari Natanzi also said the Foreign Ministry needs serious restructuring and draw up new strategies given the developments in the past four years.

“Iran’s regional power as well as its global influence has increased. In order to seize this opportunity, the diplomacy apparatus should put new plans on its agenda,” said the parliamentarian.

He also said the domain of Iran’s interests should be seriously redefined.

Lawmaker Heshmat Falahat-Pisheh said the priority of the country’s diplomacy agenda should be to ease tensions.

“President Rouhani should pay due regard to Iran’s regional diplomacy during his second 4-year term, and promotion of engagement with neighbours, especially Persian Gulf littoral states, should be on the agenda,” he noted.

“We’ve been witnessing positive signals from Saudi Arabia and some neighbouring countries in recent days, which should be taken into consideration,” he said.

He also called on the Foreign Ministry to work towards absorbing foreign investment.

Mohammad Javad Kolivand, another legislator, weighed in on Washington’s ramping up its hostile moves against Iran as well as US President Donald Trump’s bellicose positions.

He said Iran should not allow its programs to be eclipsed by Washington’s bellicosity.

“We shouldn’t look to Trump to regulate our programs because he used to have a position in the domain of economy and has no understanding of diplomatic principles and international relations,” he noted.

He said the new administration should look to Ayatollah Khamenei’s guidelines for its diplomacy.

Diplomacy of Smile Should Continue

“Iran managed to take giant steps in its foreign policy domain with the diplomacy of smile, and this approach should definitely be maintained in the 12th administration’s diplomacy arena,” he said.

He expressed hope the diplomacy apparatus will make a few tactical changes in dealing with some peripheral issues to move forward more actively.