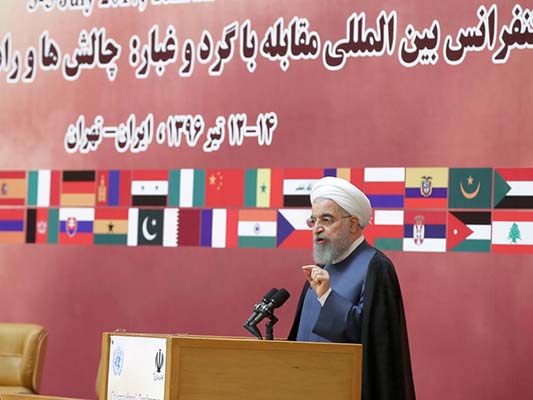 Iranian President Hassan Rouhani says the origins of the sand and dust storms hitting Iran are mostly based in surrounding countries, and a serious regional cooperation is needed to tackle such environmental issues. 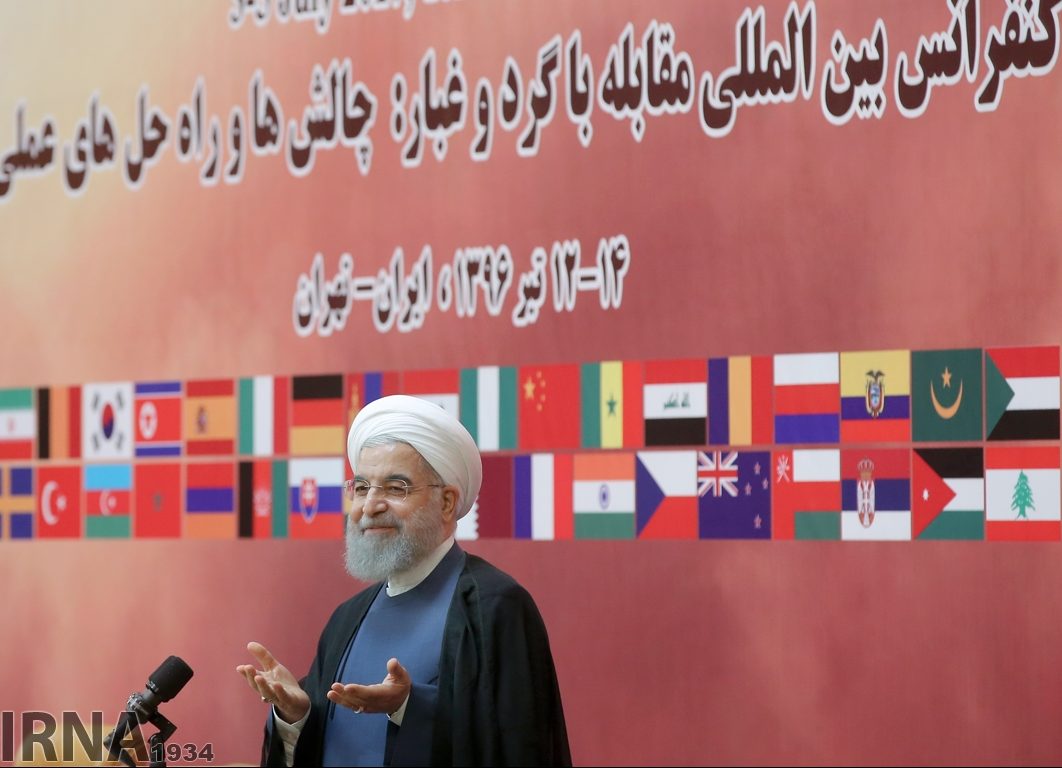 In a Monday address to the “International Conference on Combating Sand and Dust Storms: Challenges and Practical Solutions” in Tehran, Rouhani said the origins of most sand and dust storms hitting Iran are regional.

It goes without saying that there are some local environmental elements behind the storms but their role is limited, he added.

“At most, about 2 million hectares of Iran’s deserts may play a role in triggering the dust and sand storms. But we should look for the main origins outside of the country. In other words, about 20 per cent of the origins are domestic and the remaining 80 per cent are regional,” he said.

The Iranian president went on saying that some regional countries including Iraq, Jordan, Kuwait, Syria, Saudi Arabia, Pakistan, Afghanistan and Turkmenistan are the main sources of sand and dust in the region.

“Sometimes, about eight million cubic square metres of sand and storm enter our country within just 24 hours endangering our life, health, agricultural sector as well as environment,” he noted.

He called the problem a regional one and said today, like many other environmental problems, the sand and dust storms have turned into a regional and sometimes global problem putting in trouble the people from western and eastern Asia to the North Africa.

He pointed out that no country can overcome the problem of dust and sand storms without cooperation with the countries in the region and the world.

Building dams without addressing the environmental and scientific concerns can threaten the future of the region, he said, apparently pointing to Turkey and Afghanistan’s dam building projects.

Therefore, he added, we must stop such projects. 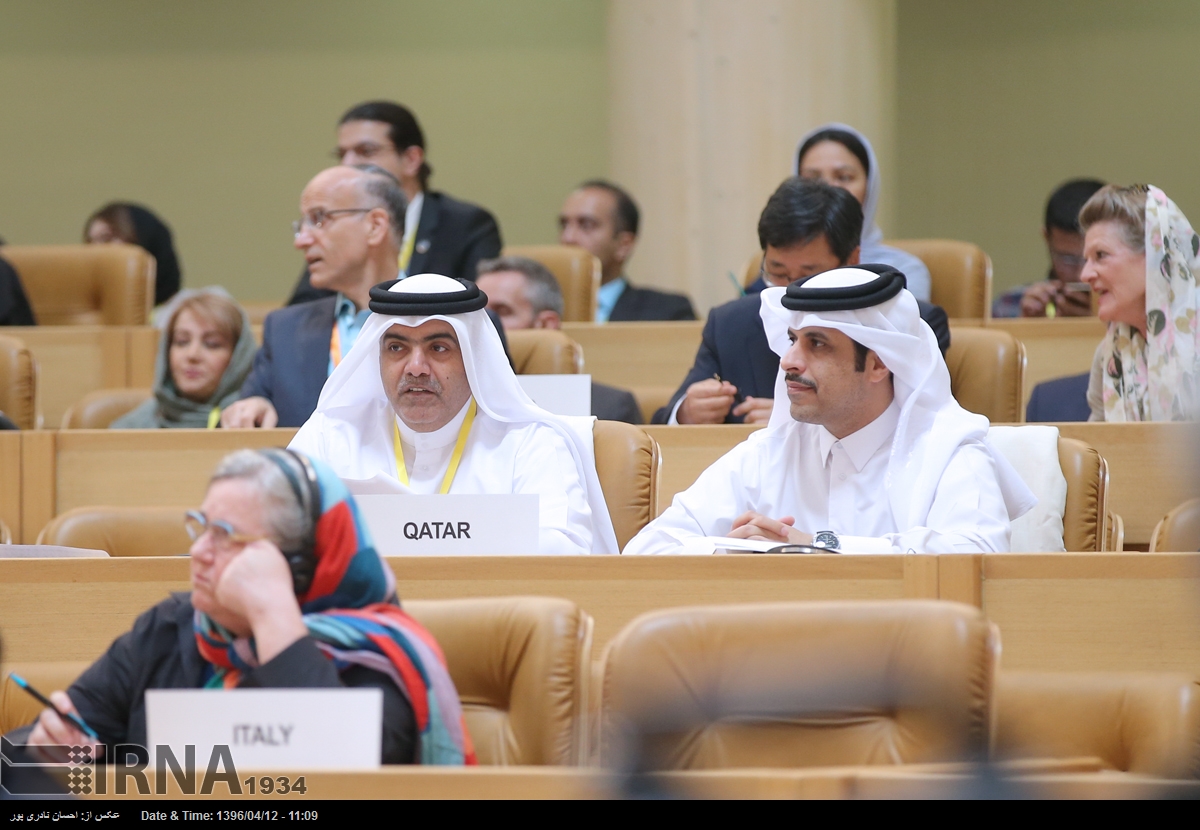 “In our region, there is a country which is planning to build 22 dams. Such projects have destructive effects on the Tigris-Euphrates River in Iraq, Iran and a number of other regional states. So, we can’t remain indifferent towards the effects. On the other hand, all the regional states as well as international organizations should step in and shoulder their responsibilities,” he added.

The Iranian president stressed that no state should remain indifferent towards environmental problems and said building a huge number of dams in southern and northern Afghanistan can ruin the environment of Iran’s Khorasan and Sistan-Baluchestan provinces.

“If Hamun Lake is dried up entirely, not only the people in eastern Iran but also the Afghans will suffer the dust and sand storms. And if there is no solution to the environmental problem, the storm-hit population may have to migrate and this will destroy the civilizational hubs of the region, endangering the lives of people,” he added.

All regional and international organizations are thus responsible and should step in to tackle the problem, he said.

Iran’s President said all regional states should strengthen the region instead of turning themselves into the strongest state of the region. 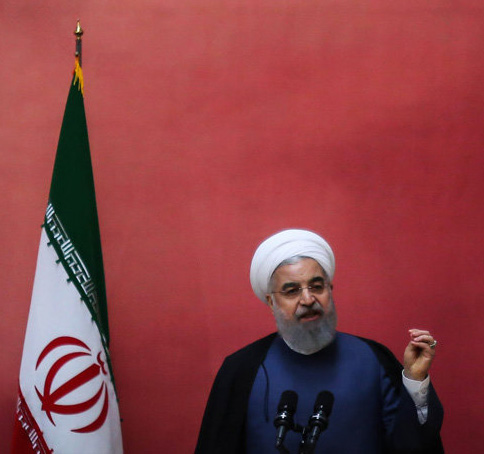 “No state should impose itself on others and fan the flames of regional divisions,” he went on to say.

“We are members of a family in the Middle East and Western Asia who can’t survive apart from each other. Members of a family can have a good life only if the family is strong enough and all members are equal in terms of holding power,” he said.

The Iranian president said today the regional states should seek to establish a stronger region by avoiding destructive and undue competitions.

“Waging war and launching regional competitions negatively influence not only the regional politics but also the environment, paving the way for further dust and sand storms.”

Rouhani went on saying that if ISIS and other terror groups in Iraq and Syria continue to destroy buildings and farms, the region will turn into a large desert triggering more sand and dust storms.

He called terrorism a regional plight and stressed that terrorism acts like an infectious microbe engulfing the whole region. “So, any power and superpower thinking that ISIS can be used as a proxy to press ahead their regional and global projects is totally wrong because terrorism will lash back at all states if there is no global cooperation to cope with it,” he said. 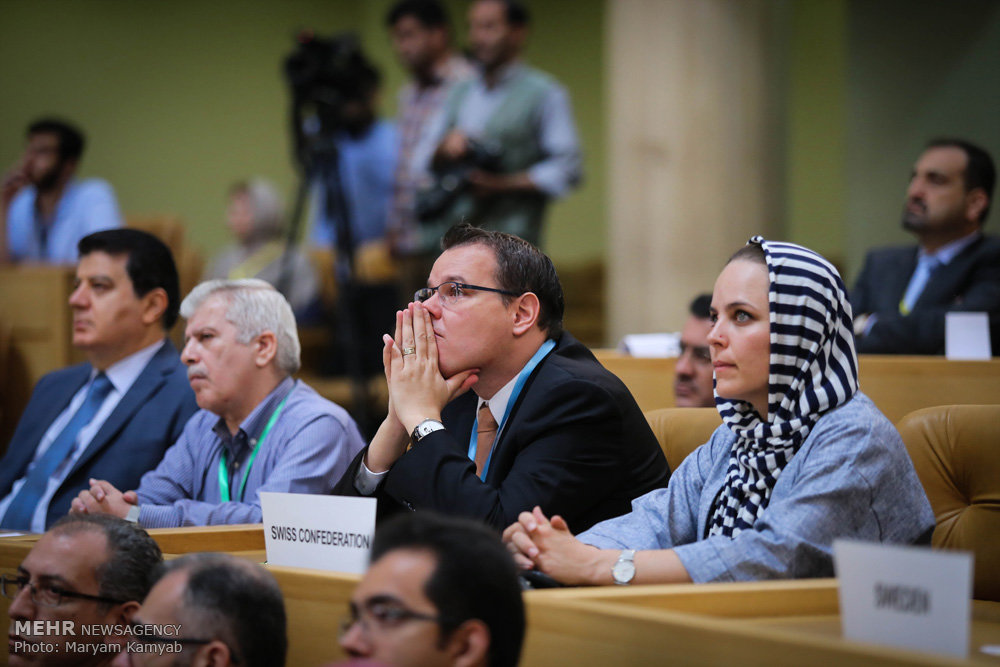 “No policy will be more successful in the region than the win-win policy and if there is a country maintaining that it can pursue its own interests at the cost of others’, it is totally wrong,” the president added.

The era of erecting walls in the world has come to an end, the Iranian President noted, regretting that there are still some naïve politicians who are seeking to erect walls.

“Such politicians should be aware that today we should bring people together instead of separating them from each other. Today we should respect others to preserve our own rights. We can’t preserve our rights by threatening others,” he added.

He cited the US and Saudi Arabia as two countries which threaten other nations to preserve their own rights and said these countries are totally wrong.

“I don’t name the Zionist regime because it is totally based on deception, occupation and aggression,” he said.

Elsewhere in his address, Rouhani added the only way to a peaceful life in Western Asia and the whole world is to adopt a win-win policy. Meanwhile, “all regional and international states should take their responsibility,” he said. 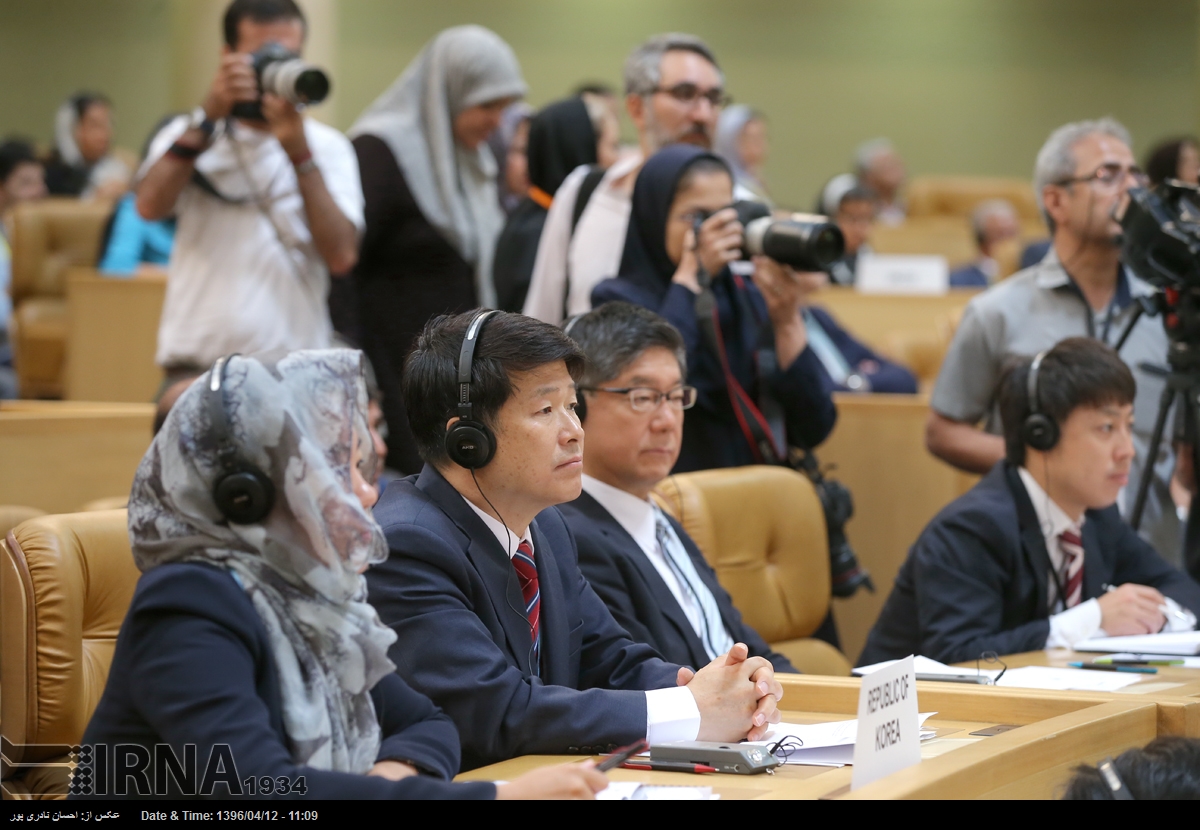 We Have No Choice but to Help Each Other

The Iranian president said talks are underway between Iran and its regional neighbours Iraq, Afghanistan and Turkmenistan on environmental issues and added, “Through talks we can come up with joint projects which are in the interests of the whole region.”

“We should see ourselves members of a single family and don’t miss any chance to help each other,” he said.

Rouhani once again stressed that the only solution to the environmental problems is to expand ties and cooperation and said the United Nations should shoulder its responsibility and concentrate its efforts to tackle the problems.

“We can overcome the problems by drawing on the UN’s financial and technical resolutions,” he added.

Representatives of 43 countries have attended the International Conference on Combating Sand and Dust Storms, which is being co-hosted by the United Nations (UN) and Iranian Department of Environment.

The international conference is aimed at reviewing the challenges and practical solutions to the dust pollution that has plagued Iran and several other countries in the Middle East. 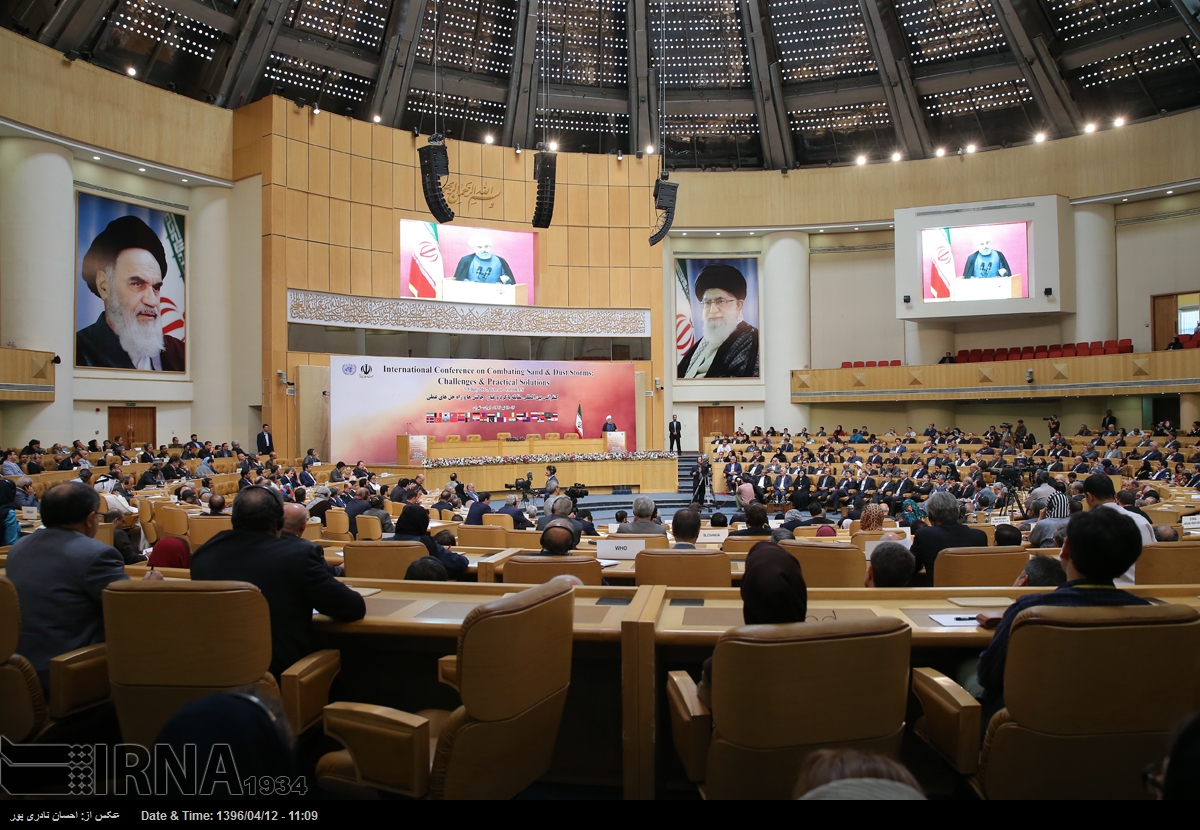