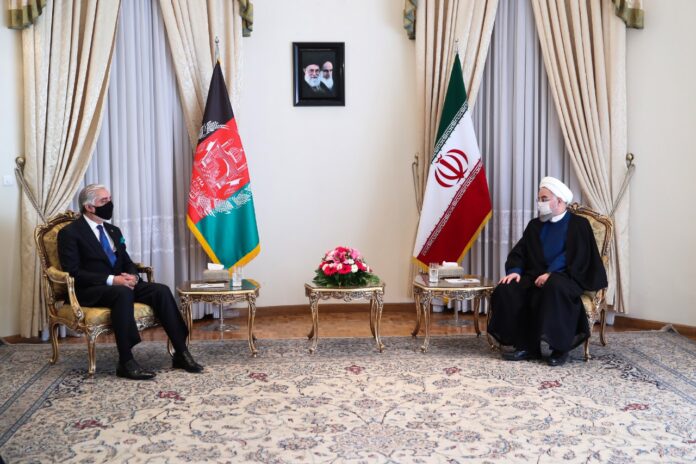 Iranian President Hassan Rouhani has unveiled plans for the opening of a long-awaited railway linking Iran’s Khaf to Afghanistan’s Herat, saying the new route would promote trade cooperation between the two neighbours.

In a Monday meeting with Head of Afghanistan’s High Council for National Reconciliation Abdullah Abdullah in Tehran, President Rouhani said the inauguration of Khaf-Herat rail route in the coming days will help enhance the economic and trade cooperation between the two states.

The president also expressed Iran’s readiness to connect gas and oil product pipelines to Afghanistan to allow the Afghan people to enjoy the energy carriers.

Hailing the High Council for National Reconciliation’s efforts to establish peace in Afghanistan, President Rouhani said, “Peace, stability, and sustainable security in Afghanistan as a neighbour and brother of the Islamic Republic of Iran is of special significance.”

The president also touched on Iran’s support for the Afghan government and nation against foreign aggression, noting, “What is important is that the people of that country (Afghanistan) would gain real peace to maintain their achievements after years of war and clashes, and the solution to this problem is political talks and intra-Afghan negotiations.”

The US’ interference and presence in Afghanistan as an aggressor has been opposed by the Afghan people, President Rouhani stated, adding, “The US government whose policies in the region and world have been defeated and which has not achieved any success is seeking to take advantage of the peace talks in Afghanistan for (US presidential) election.”

The president finally called for the expansion of ties with Afghanistan in all fields under a long-term agreement, saying, “As we have always stood by the Afghan people, we will continue to support this country, all currents, ethnicities and peace-loving groups, and we hope to see the establishment of sustainable security in that country.”

For his part, Abdullah Abdullah praised Iran as a good friend and neighbor of Afghanistan and admired the Islamic Republic’s contribution to lasting peace and security in his country.

The visiting official also expressed gratitude to Iran for hosting the Afghan refugees during years of war and unrest in Afghanistan.

“I had good meetings with the Islamic Republic’s officials in my visit to Tehran,” the former chief executive officer of the Afghan unity government noted, saying he would convey Iran’s message of support to Kabul and pursue the implementation of bilateral deals.