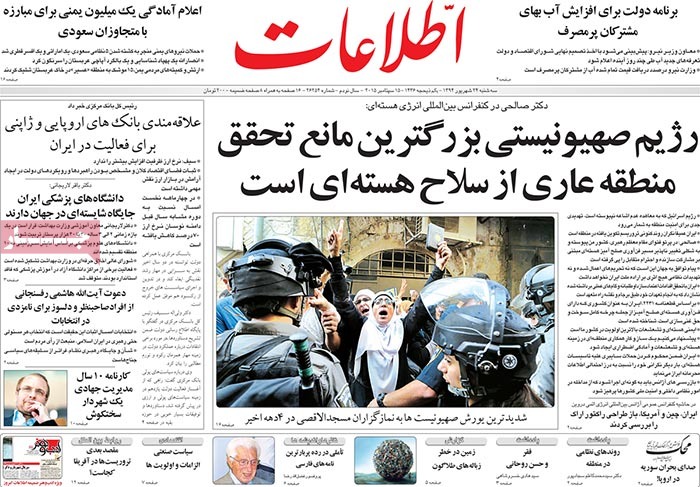 A special look at the headlines Ettela’at newspaper covered on September 15.

♦ “The Zionist regime is the biggest obstacle standing in the way of a nuclear-free region,” the director of the Atomic Energy Organization of Iran told an international nuclear energy conference.

♦ Iran, China and the United States have reviewed the redesigning of the Arak reactor on the sidelines of an IAEA General Conference in Vienna.

♦ Zionists have staged the most ferocious attack on worshippers in Al-Aqsa Mosque in four decades.

♦ Government plans to raise water prices for those who consume too much water.

The deputy energy minister has said that new prices will be announced within days after they have been approved by the Economy Council and the Cabinet.

♦ One million Yemenis have signaled their readiness to take on Saudi aggressors.

Attacks by Yemeni forces have resulted in the deaths of five Saudi military men, an Emirati soldier and a Qatari officer.

♦ The governor of the Central Bank has said that European and Japanese banks are interested in doing business in Iran.

♦ The deputy health minister said that Iranian medical science universities have a lofty position in the world.

♦ Ayatollah Akbar Hashemi Rafsanjani has invited pundits and those who care about the establishment to run in upcoming elections.

The chairman of the Expediency Council said that this year’s elections will reaffirm the fact that in Islamic Iran, election of all officials, including the leader, is a direct result of popular vote.