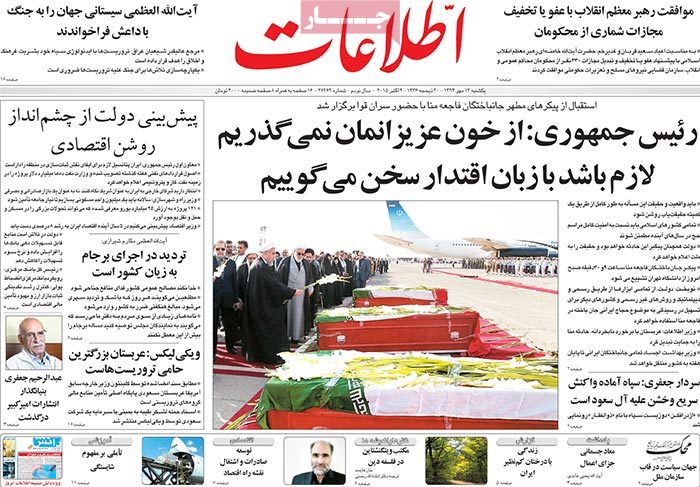 A special look at the headlines Ettela’at newspaper covered on October 4.

♦ “We won’t close our eyes to the bloodshed involving our loved ones; we will speak the language of force, whenever necessary,” President Rouhani said in a ceremony to welcome home the bodies of Iranian pilgrims killed in Mina.

♦ The Supreme Leader has pardoned or commuted the sentences of a number of convicts.

♦ The commander of the Islamic Revolution Guard Corps has signaled the readiness of his men to react swiftly and harshly to the Saudi government.

♦ [Prominent Shiite Cleric] Grand Ayatollah Ali al-Sistani has called on the world to take on IS.

“With their dark ideology, these terrorists are taking aim at humanity, culture and ethics,” the top cleric said.

♦ A government projection of the positive economic outlook

The first vice-president has said that Iran does have the potential to play a stabilizing role in the region.

♦ Grand Ayatollah Nasser Makarem Shirazi has said that any hesitation in the implementation of the Joint Comprehensive Plan of Action will harm the country’s interest.

He said, “Factional interests should not be placed ahead of public interests.”

♦ WikiLeaks has said that Saudi Arabia is the biggest sponsor of terrorists.

♦ Abdolrahim Jafari, the founder of Amirkabir Publishing Company, has passed away.